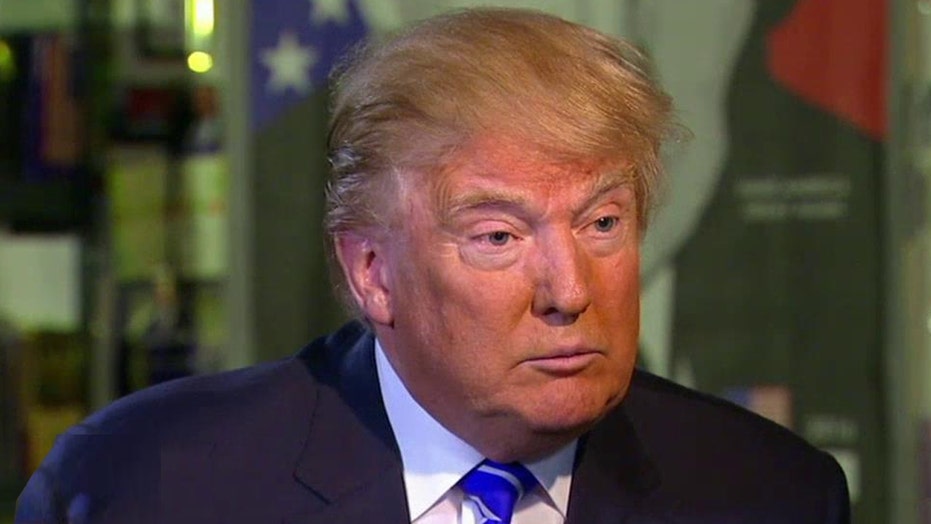 Donald Trump renewed pressure Sunday on fellow GOP presidential candidate Ted Cruz to resolve questions over his eligibility to run, warning that the matter could be used against him by Democrats in a general election.

Trump, in a tight race with Cruz in the fast-approaching Iowa caucus vote, said on “Fox News Sunday” that he was unsure whether the Texas senator, born in Canada to a U.S. citizen mother and a Cuban citizen father, is a natural-born American citizen.

“I really don't know,” he said. “Does natural born mean born to the land? In that case he's not. But nobody knows what it means. And … it hasn't gone to the Supreme Court. I speak well of Ted. I'm only saying that Ted has to get this problem solved because if he's running against a Democrat, and they bring a lawsuit, he's got a hell of a thing over his head.”

Trump again said he thinks Cruz should get a declaratory judgment to clear up the matter.

He has a 13-point lead over the GOP field in an average of national polls, but trails Cruz in Iowa, which on Feb. 1 holds the first contest of the election season.

Cruz has brushed off calls to seek a court judgment on the issue.

“The son of a U.S. citizen born abroad is a natural-born citizen,” Cruz said in a  CNN “State of the Union” interview aired Sunday. “The internet has all sorts of fevered swamp theories.”

Legal scholars have said Cruz would qualify as a natural-born citizen, and therefore is eligible to run, because one parent is a citizen.

Trump on Sunday also pushed back against the notion he cannot compete against Democratic front-runner Hillary Clinton in a general election.

“I think I’m going to do very well -- if it's Hillary. … People that have never been part the process before are doing it because they're going to vote for Trump,” he said.

However, the Republican establishment and others argue his efforts to appeal to the party’s conservative base -- with such promises as building a wall along the U.S.-Mexico border and his willingness to dismiss critics as “dummies” -- will make it difficult for him to appeal to a large cross-section of voters and win in November.

On Sunday, Trump defined his political doctrine as: “tough and smart and vigilant.”

The RealClearPolitics poll average shows Clinton leading Trump in a head-to-head matchup by 2 percentage points, compared to Cruz leading her by 1.8 percent and fellow GOP contender Florida Sen. Marco Rubio ahead of Clinton by 3 points.

On Sunday, Trump also addressed the economic turmoil in China’s markets, saying the recent Wall Street woes are proof the United States is “so tied into China, that when China goes bad, we go bad. We're just tied in, and we're tied into their advantage, not to our advantage.”

“What we have to do is be smart,” Trump said. “They want to, as you know, they want to continue to devalue their currency in order to devalue out -- but, what that's doing, it's stopping our companies from being able to compete with China.”