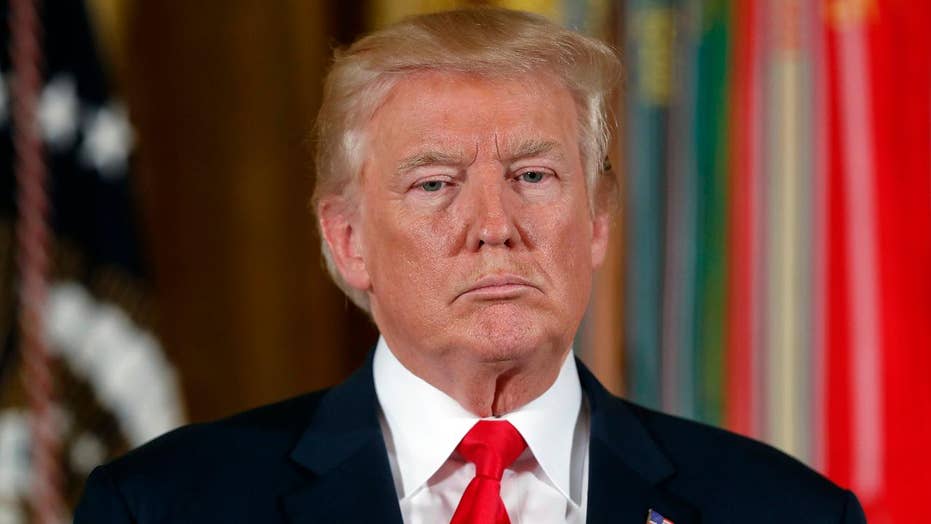 Trump: Kim Jung Un ‘will regret it fast’ if he attacks Guam, US allies

President Trump said Saturday that the leaders of China and Japan are pleased that he's working toward a diplomatic solution with neighboring North Korea, perhaps reversing the collision course on which the president and leader Kim Jong Un were headed over the North's nuclear weapons program.

“Chinese President XI JINPING and I spoke at length about the meeting with KIM JONG UN of North Korea,” Trump said Saturday in one of three tweets on the issue. “President XI told me he appreciates that the U.S. is working to solve the problem diplomatically rather than going with the ominous alternative. China continues to be helpful!”

Washington lawmakers have supported the Trump administration's increasing economic sanctions in recent months on North Korea, as that country has tested nuclear warheads and ballistic missiles.

However, Democrats, who were highly critical of Trump’s escalating tough talk over the issue, are expressing wariness about his agreed-to talks with North Korea.

“Diplomacy is the right path forward to deal with North Korea,” Virginia Sen. Mark Warner said after reports early this week about the possibility of talks. “At the same time, due to Pyongyang’s history of obfuscation and international defiance, the United States must proceed with caution. I am deeply concerned that the White House has not laid the necessary diplomatic groundwork and coordination for direct talks with North Korea," continued Warner, a Democrat on the Senate Intelligence Committee.

Trump had previously threatened North Korea with "fire and fury like the world has never seen."

He also tweeted Saturday: “Spoke to Prime Minister Abe of Japan, who is very enthusiastic about talks with North Korea,” and "North Korea has not conducted a Missile Test since November 28, 2017 and has promised not to do so through our meetings. I believe they will honor that commitment!"