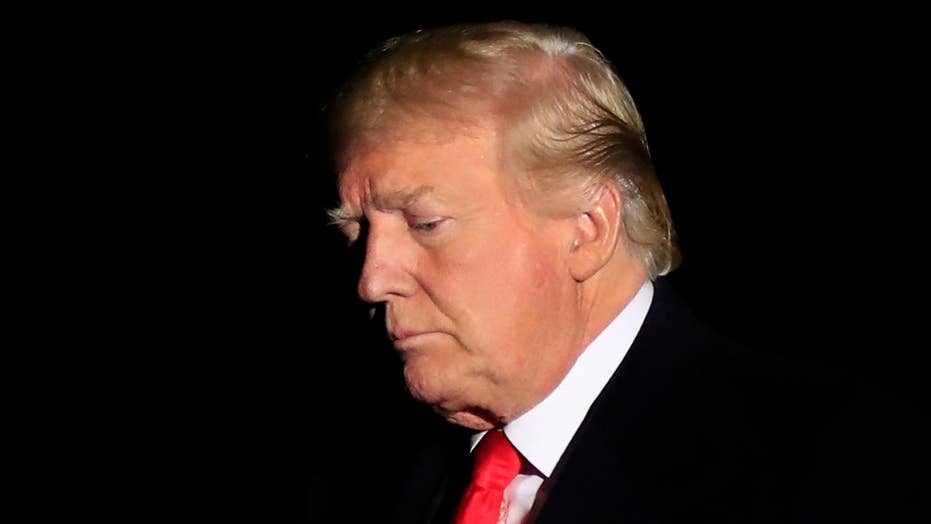 Trump tweets on impact of 'bomb stuff' on GOP momentum

President encourages Republicans to go out and vote as the media shifts its focus away from the midterms to the suspicious packages sent to Democrats; John Roberts reports from the White House.

President Trump said Friday that “this ‘Bomb’ stuff” is slowing the midterm momentum for the GOP, encouraging Republicans to “go out and vote!”

“Republicans are doing so well in early voting, and at the polls, and now this “Bomb” stuff happens and the momentum greatly slows—news not talking politics. Very unfortunate, what is going on. Republicans, go out and vote!” Trump tweeted Friday.

The tweet openly discusses the potential political implications of the bomb threats, though it's unclear whether the heavy news coverage of the packages really will depress turnout for either side. Initial indicators reflected a turnout surge across the country in early voting, with Republicans showing up in big numbers in several key states.

Meanwhile, top political leaders on both sides of the aisle have been sparring ever since the package bombs were intercepted over whether overheated political rhetoric—and whose—was to blame.

Trump, after the packages intended for Obama and Clinton were intercepted, called for unity. But Senate Minority Leader Chuck Schumer, D-N.Y., and House Minority Leader Nancy Pelosi, D-Calif., said the president’s “words ring hollow until he reverses his statements that condone acts of violence.”

Schumer and Pelosi pointed at Trump’s recent praise of a congressman who body-slammed a reporter, and his repeated phrase that media outlets are “the enemy of the people.”

While Trump used a subdued tone in the immediate aftermath of the package bombs’ discovery, he tweeted Thursday that media are fanning the flames.

“A very big part of the Anger we see today in our society is caused by the purposefully false and inaccurate reporting of the Mainstream Media that I refer to as Fake News. It has gotten so bad and hateful that it is beyond description. Mainstream Media must clean up its act, FAST!” he tweeted.

Former CIA Director John Brennan—the target of one of the package bombs, which was sent to CNN’s New York City office and led to a dramatic evacuation Wednesday of the Time Warner Center—fired back.

“Stop blaming others. Look in the mirror. Your inflammatory rhetoric, insults, lies & encouragement of physical violence are disgraceful. Clean up your act….try to act Presidential. The American people deserve much better. BTW, your critics will not be intimidated into silence,” Brennan tweeted.

In addition to those sent to Brennan, Obama, Clinton and Booker, package bombs were also addressed to liberal billionaire George Soros, Rep. Maxine Waters, D-Calif., and former Attorney General Eric Holder. The return addresses on most of the packages, according to Secret Service, was that of a Florida office for Rep. Debbie Wasserman Schultz, D-Fla. The package to Holder was sent to the wrong address and returned to the Wasserman Schultz' location.

Waters, who has faced past Republican criticism for her calls to confront Trump administration officials in public spaces, said Trump should “take responsibility” for the latest violence.