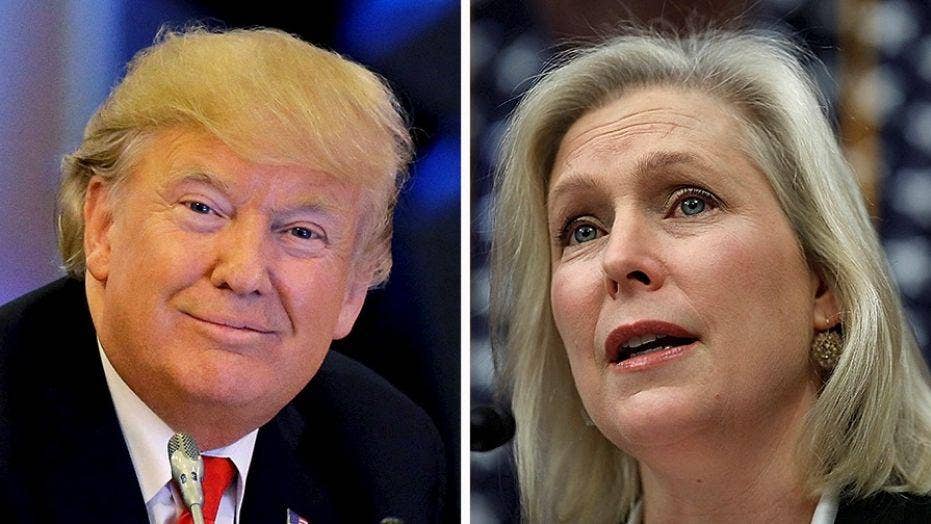 New York senator responds after president slammed her on social media calling her a 'lightweight.'

The president was reacting to claims revived by three female accusers during a press conference and TV interview on Monday, amid an apparent effort to shift the sexual harassment spotlight from Congress to the White House.

The women, who had previously accused the president of sexual misconduct, called for a congressional investigation into the president. Gillibrand, who helped lead calls for Sen. Al Franken, D-Minn., to resign over groping allegations, in turn said on CNN that Trump should resign as well.

“Lightweight Senator Kirsten Gillibrand, a total flunky for Chuck Schumer and someone who would come to my office ‘begging’ for campaign contributions not so long ago (and would do anything for them), is now in the ring fighting against Trump. Very disloyal to Bill & Crooked-USED!” Trump tweeted Tuesday.

Gillibrand fired back: "You cannot silence me or the millions of women who have gotten off the sidelines to speak out about the unfitness and shame you have brought to the Oval Office."

At a press conference later in the day Tuesday, Gillibrand called Trump's comment a "sexist smear" and an attempt to "silence" her "voice." Other female lawmakers jumped to her defense, with Sen. Elizabeth Warren, D-Mass., asking via Twitter, "Are you really trying to bully, intimidate and slut-shame @SenGillibrand?"

Moments before engaging with Gillibrand, Trump also rejected the accounts of the three women who spoke Monday -- claiming the focus is on them because Democrats could not prove any Russia collusion.

“Despite thousands of hours wasted and many millions of dollars spent, the Democrats have been unable to show any collusion with Russia –so now they are moving onto the false accusations and fabricated stories of women who I don’t know and/or have never met. FAKE NEWS!” Trump tweeted.

Trump has long rejected accusations from over a dozen women who have made such claims against him.

The three women reviving their claims spoke on NBC’s “Megyn Kelly Today” and in a press conference in New York City.

“I ask Congress to put aside their party affiliations and ask that they investigate Trump’s history of sexual misconduct,” Rachel Crooks, who claims Trump kissed her on the lips 12 years ago when she was a 22-year-old receptionist at a company in Trump Tower, said during the press conference. “If they were willing to investigate Senator Franken, I think it’s only fair they do the same for Trump.”

The women also called for Trump’s resignation, but acknowledged that was unlikely, and pushed for a congressional probe into the allegations against the president.

“In terms of resigning, it’s probably the right thing to do,” Crooks said. “But I can’t imagine he will. I think the congressional investigation is the only thing we can ask for.”

Two other women – Jessica Leeds, who claims Trump started “kissing and groping” her on a flight in the 1970s, and Samantha Holvey, a former Miss USA pageant contestant – also spoke publicly on Monday.

The White House continues to defend the president, decrying the claims as “false.”

“These false claims, totally disputed in most cases by eyewitness accounts, were addressed at length during last year’s campaign, and the American people voiced their judgement by delivering a decisive victory,” a White House spokesperson said in a statement Monday. “The timing and absurdity of these false claims speaks volumes and the publicity tour that has begun only further confirms the political motives behind them.”

Last month, Gillibrand also said in an interview with The New York Times that Bill Clinton should have resigned the presidency over his affair with Monica Lewinsky.

THE LEFT TURNS ON BILL CLINTON, BIDEN OVER BEHAVIOR TOWARD WOMEN

She brought up Trump in the same interview.