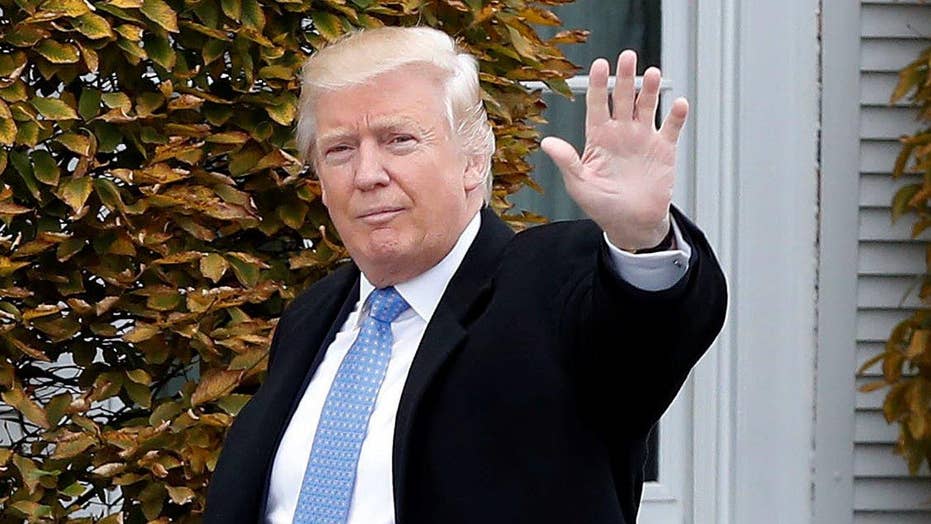 When the “newspaper of record” refused to go off-the-record, President-elect Donald Trump issued his first veto, canceling a planned Tuesday meeting with The New York Times -- though Trump quickly reversed course and rescheduled the sitdown.

After Trump issued a series of tweets early Tuesday morning during which he called the Times a "failing" paper and cancelled the meeting, Trump and the Times appeared to reach some sort of détente by late morning, when Trump tweeted "The meeting with the @nytimes is back on at 12:30 today. Look forward to it!"

Trump met with several Times reporters and columnists as well as the paper's top brass, touching on topics from climate change to whether he favored a further criminal investigation of his general election opponent, Hillary Clinton. During the campaign, Trump had repeatedly said he would consider appointing a special prosecutor to look into alleged misdeeds of the Clinton Foundation and Clinton's use of a private email server.

"My inclination would be for whatever power I have on the matter is to say let's go forward. This has been looked at for so long, ad nauseum," Trump said, according to a series of tweets from a Times reporter who was in the room.

Trump also discussed putting son-in-law, adviser and real estate developer Jared Kushner in charge of a hypothetical Middle East peace negotiation, and he defended embattled chief strategist Steve Bannon. Bannon has been under fire for days by those who claim he represents or encourages the so-called "Alt-Right" or "White Nationalist" movements.

"If I thought he was a racist or Alt-Right or any of the things, the terms we could use, I wouldn't even think about hiring him," Trump said.

Trump clearly disavowed the "Alt-Right" movement on several occasions during the Times interview, which was preceeded by a brief off-the-record session.

I cancelled today's meeting with the failing @nytimes when the terms and conditions of the meeting were changed at the last moment. Not nice

"It's not a group I want to energize," Trump said of the fringe groups. "And if they are energized I want to look into it and find out why."

Trump also said he believed "there is some connectivity" between humans and climate change and said he was keeping an "open mind" on the topic -- a stance that puts him at odds with many of the Republican voters who cast ballots for him just two weeks ago.

The respectful interview marked a stark contrast from the earlier give-and-take during which Trump and the Times issued dueling statements – Trump on Twitter, the Times in an article – regarding who was to blame for the breakdown of the initial sitdown. It was the latest salvo in a war of words that’s raged between the two titans since Trump declared his candidacy for president in June 2015.

“I cancelled today’s meetings with the failing @nytimes when the terms and conditions of the meeting were changed at the last moment. Not nice,” Trump tweeted at 6:16 a.m.

He continued in another tweet: “Perhaps a new meeting will be set up with the @nytimes. In the meantime they continue to cover me inaccurately and with a nasty tone!”

Eileen Murphy, the senior vice president of corporate communications for the Times, said Trump’s tweets were the newspaper’s first indication that the meeting had been canceled. She also disputed Trump’s version of events.

“We did not change the ground rules at all and made no attempt to,” Murphy said in a statement issued in an article on the company's website. “They tried to yesterday — asking for only a private meeting and no on-the-record segment, which we refused to agree to. In the end, we concluded with them that we would go back to the original plan of a small off-the-record session and a larger on-the-record session with reporters and columnists.”

The session with the Times followed a reportedly contentious – and totally off-the-record – Monday meeting with representatives and anchors of the major television networks. Fox was included in that meeting.

It was also the first time Trump and a representative for the Times had spoken since a Sunday piece by the Times’ public editor, Liz Spayd, excoriated the paper’s coverage of the election. Spayd wrote the paper had received one of the largest influx of letters to the editor since the 9/11 terror attacks. And readers were not complimentary of the Old Gray Lady.

“The number of complaints coming into the public editor’s office is five times the normal level, and the pace has only just recently tapered off,” Spayd wrote. “…Many people are commenting on the election, but many are venting about The Times’ coverage.”

Spayd did not reply to requests for comment from FoxNews.com on Monday or Tuesday.

After he railed against the Times’ allegedly changing the terms of Tuesday morning’s meeting, Trump sent a tweet alluding to the public editor’s article.

“The failing @nytimes just announced that complaints about them are at a 15 year high. I can fully understand that – but why announce?” Trump tweeted.

Ahead of Trump’s meeting with the paper, the Times also issued a blistering editorial on Tuesday, claiming a “tide of racism, anti-Semitism and xenophobia” had “swept the country since the election of Donald Trump, whose campaign stoked these views…”