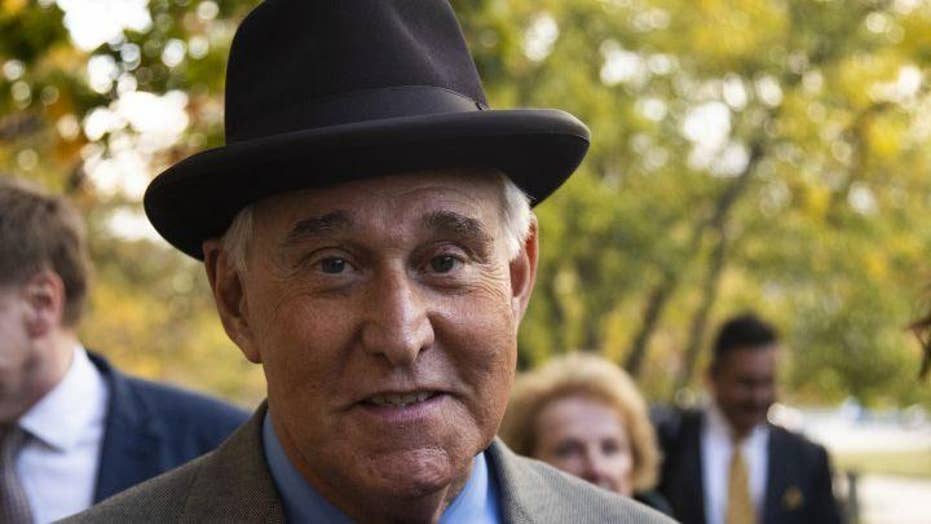 Roger Stone: Trump clemency could save me from prison

Former Trump campaign adviser Roger Stone says he filed appeals for his convictions and argues his health and age put him at risk of contracting coronavirus in prison.

President Trump Saturday promoted a petition effort to pardon Roger Stone a day after a judge ordered his former campaign advisor to report to his upcoming prison term, which Stone dubbed a "death sentence."

Trump retweeted a post about a growing petition to urge the president to give Stone, a former GOP political operative, a full and unconditional pardon.

Trump has long been sympathetic to Stone's case and said in February that his ally "has a very good chance of exoneration.” Saturday's tweet further raises speculation that Trump will intervene on behalf of Stone, who has been pleading for help to avoid prison.

Stone appeared on the Fox Business program "Lou Dobbs Tonight" on Friday and asked Trump to commute his sentence or to grant him a federal pardon.

"I think this is a death sentence," Stone said. "I don’t think I will live to see my appeal succeed, which is why I have been very forthright about my praying that the president acts, either with a commutation of my sentence so I may follow my appeal and win vindication or of course, a pardon. That’s completely within his power, but I would call on him to do it on humanitarian grounds as an act of both mercy and justice."

Roger Stone arrives at federal court in Washington, Thursday, Feb. 20. Documents released by the Justice Department on Friday show former Trump officials telling federal investigators that Stone had spoken with WikiLeaks prior to a massive dump of emails the were damaging to Hillary Clinton in July 2016.  (AP)

Stone, 67, was convicted in November 2019 on charges of obstruction of justice, false statements, and witness tampering, which all stemmed from Robert Mueller's Russia probe. He was sentenced to 40 months in prison back in February.

Stone had made two requests for a new trial, following revelations about the possible political bias of one of the jurors in his first case. Both motions were ultimately denied.

On Friday, U.S. District Judge Amy Berman Jackson delayed Stone’s surrender date until July 14, after his attorneys had requested an extension into September, due to coronavirus concerns.

The Department of Justice did not oppose Stone's request to report to the Bureau of Prisons on Sept. 3, instead of June 30, according to court documents. Jackson, however, only granted Stone's motion in part, allowing him an extra 14 days to get his affairs in order.

Stone hasn't been shy about asking Trump for help. He posted a picture of himself this weekend on Instagram with a one-word banner headline: "Pardon."

Stone said he fears he'll die if he heads to a correctional facility during the COVID-19 crisis.

"I’ve exhausted my legal remedies, I’m out of money," Stone told Dobbs. "This has taken everything I have. My family’s essentially indigent. This has been the worst week of my life. I’m exhausted."