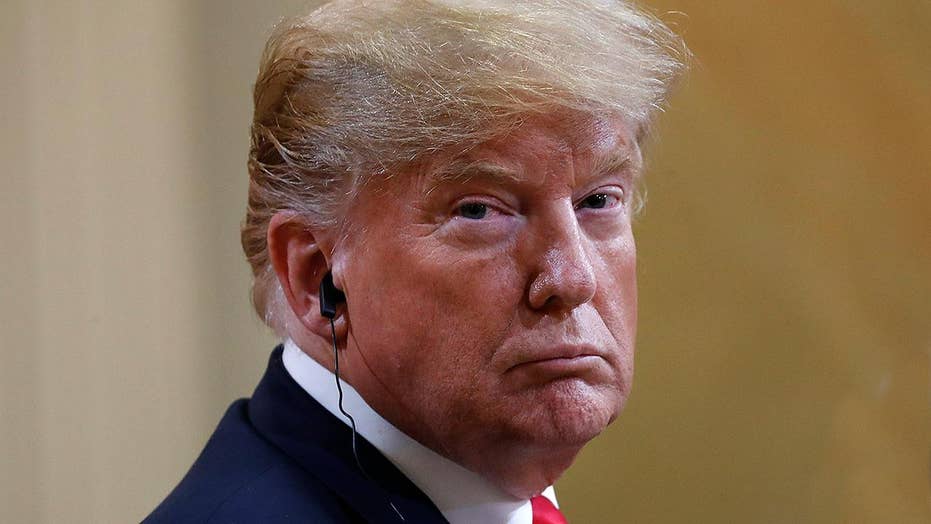 What explains Trump's language on Russia?

Why won't critics accept Trump's statements that he believes the intelligence assessment on Russian meddling? Byron York and Dinesh D'Souza share their theories on 'The Ingraham Angle.'

President Trump on Wednesday quickly resumed his full-throated defense of his meeting with Russian President Vladimir Putin after attempting to walk back the most controversial moment from their joint press conference, once again calling the summit a success and blasting his critics as “haters” with “Trump Derangement Syndrome.”

“So many people at the higher ends of intelligence loved my press conference performance in Helsinki. Putin and I discussed many important subjects at our earlier meeting. We got along well which truly bothered many haters who wanted to see a boxing match. Big results will come!” Trump tweeted early Wednesday.

He added, moments later, that, “Some people HATE the fact that I got along well with President Putin of Russia. They would rather go to war than see this. It’s called Trump Derangement Syndrome!”

Trump addressed the issues again later in the day during a Cabinet meeting. He denied Russia is still targeting the U.S., despite intelligence warnings to the contrary. He also said, “There’s been no president ever as tough as I have been on Russia.” Citing sanctions and other developments, Trump claimed Putin is “not happy about it.”

The return to Trump’s typical combative tone followed his attempt Tuesday to walk back a line from their press conference that had drawn harsh bipartisan criticism, acting under pressure to calm the controversy.

In Helsinki a day earlier, Trump had said he doesn’t “see any reason why” Russia would be behind election meddling. This and other comments led to bipartisan outrage and accusations that he was taking Putin’s word over the intelligence community’s.

But Trump, at the White House on Tuesday, said he meant the opposite, suggesting that he was surprised by the negative reaction when he returned to Washington.

“I came back and said ‘What is going on, what’s the big deal?” Trump said during a meeting with GOP lawmakers at the White House, adding that he reviewed the transcript of the press conference and “realized that there is a need for some clarification.”

The president told reporters that he meant to say he doesn’t see why Russia “wouldn’t” be responsible.

“I said the word ‘would’ instead of ‘wouldn’t’…sort of a double negative,” Trump explained.

Other statements during the press conference, like his declaration that the Russian leader gave a “strong and powerful” denial, still seemed to give weight to Putin’s account. But Trump’s clarification was enough to satisfy some Republican critics. Sen. Rob Portman, R-Ohio, said he was “glad” Trump addressed the press conference.

“I’m glad he clarified his comments live. I wish he said it in front of President Putin and the world [on Monday],” Portman said on Fox News' “Your World with Neil Cavuto” on Tuesday. “But yeah, I take him at his word. If he says he misspoke, absolutely. The point is, we need to be as one here pushing back.”

And former House Speaker Newt Gingrich, who is typically a strong surrogate of the president’s agenda but blasted Trump’s performance in Helsinki, said Trump did the “right thing.”

“President Trump did the right thing today in clarifying his comments in Helsinki-reiterating his respect for and support of Director of National Intelligence Dan Coats and the intelligence community. President responded quickly and clearly once he realized he had used wrong language,” Gingrich tweeted Tuesday.

But Democrats weren’t as quick to let him off the hook.

“President Trump tried to squirm away from what he said yesterday,” Schumer said on the Senate floor Tuesday. “It’s twenty-four hours too late, and in the wrong place.”

Trump, who also sought to make clear Tuesday that he stands behind the intelligence community, maintaining that he accepts their conclusion that Russian meddling in the 2016 presidential election took place, but noting “it could be other people also.”

But in resuming his defense early Wednesday, Trump touted his meeting with NATO allies as a “triumph,” and said the meeting with Putin was an “even greater success.”

“While the NATO meeting in Brussels was an acknowledged triumph, with billions of dollars more being put up by member countries at a faster pace, the meeting with Russia may prove to be, in the long run, an even greater success. Many positive things will come out of that meeting,” Trump tweeted.

He added: “Russia has agreed to help with North Korea, where relationships with us are very good and the process is moving along. There is no rush, the sanctions remain! Big benefits and exciting future for North Korea at end of process!”