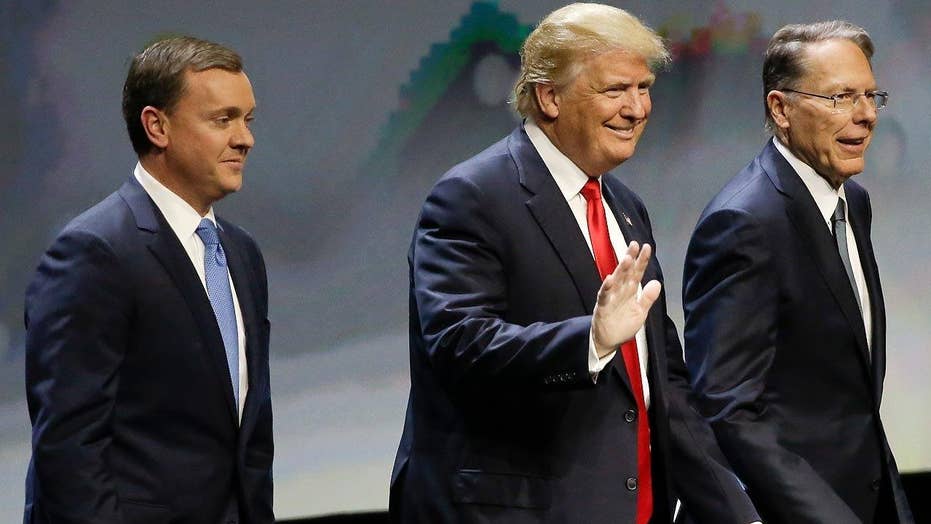 Donald Trump hopes gun rights supporters will have his back

Donald Trump rejected claims he was advocating violence against Hillary Clinton when he suggested at a rally Tuesday there might be something “Second Amendment people” can do to stop her from picking judges, telling Fox News he was only talking about their “political” power – and saying of the media coverage: “Give me a break.”

The candidate made the comments after telling voters in Wilmington, N.C., that his Democratic rival wants to “abolish” the Second Amendment.

“If she gets to pick her judges, nothing you can do folks,” he said.

Trump then added, “Although the Second Amendment people, maybe there is, I don’t know.”

Almost immediately, social media lit up with accusations that Trump was essentially calling for someone to kill Clinton.

“This is simple—what Trump is saying is dangerous. A person seeking to be the President of the United States should not suggest violence in any way,” Mook said in a statement.

But Trump, in an interview with Fox News’ “Hannity,” denied he was suggesting this.

"This is a political movement," Trump said. "This is a strong powerful movement, the Second Amendment. Hillary wants to take your guns away. She wants to leave you unprotected in your home.

"And there can be no other interpretation," Trump said of his remarks. "I mean, give me a break."

Trump’s campaign also slammed the “dishonest media” for the characterization of his comments.

“It’s called the power of unification – 2nd Amendment people have amazing spirit and are tremendously unified, which gives them great political power,” Jason Miller, senior Trump communications adviser, said in a statement. “And this year, they will be voting in record numbers, and it won’t be for Hillary Clinton, it will be for Donald Trump.”

Trump running mate, Indiana Gov. Mike Pence, said electing Trump would ensure America has a president whose Supreme Court appointments will uphold all of the liberties enshrined in the Constitution, including the Second Amendment.

"Trump is urging people around this country to act consistent with their convictions in the course of this election," Pence also said. "And people who cherish the Second Amendment have a very clear choice in this election."

Sen. Susan Collins, R-Maine, who said Monday she would not vote for Trump, also told MSNBC's "Meet the Press Daily" that she agreed with the Trump campaign's interpretation of his remarks -- but said the furor "is an example of Donald Trump's looseness with language that can lead to interpretations such as the one put out by Secretary Clinton's camp."

Some officials, including Rep. Eric Swalwell, D-Calif., went so far as to suggest the Secret Service investigate.

Donald Trump suggested someone kill Sec. Clinton. We must take people at their word. @SecretService must investigate #TrumpThreat.

Michael Hayden, the former CIA director who has come out against Trump, also said on CNN: “If anybody else had said this, they’d be out in the parking lot in a police wagon being questioned by the Secret Service.”

An agency spokesperson told Fox News, "The Secret Service is aware of the comment," but would not say whether an investigation had been launched.