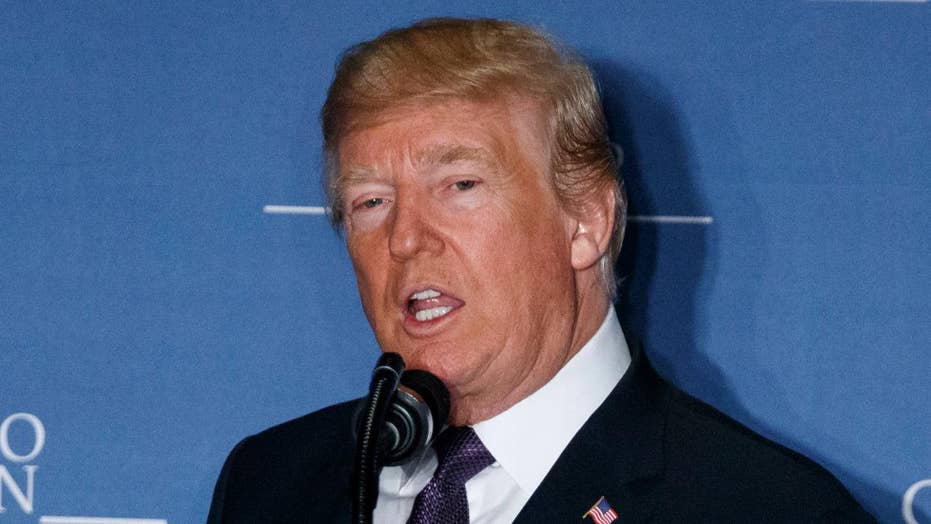 Trump: We are witnessing the rebirth of the American dream

President Trump told a Latino group Wednesday he is “ready, willing and able” to strike a deal with Congress over the illegal immigrants brought to the U.S. as children, but said “Democrats are nowhere to be found.”

In September, Trump said he was ending the Deferred Action for Childhood Arrivals program, but gave Congress six months to develop a legislative fix. But court orders have forced the Trump administration to keep issuing renewals.

Added Trump: “It's really terrible. We are ready. The expression ready, willing and able. They are nowhere to be found.”

TRUMP TAUNTS DEMS ON DACA: 'WHERE ARE YOU?'

The Obama-era program shields hundreds of thousands of young people from deportation. Republicans have argued then-President Barack Obama exceeded his constitutional authority through the executive order. Trump has called on Congress to pass its own law.

Multiple attempts to get a deal have stalled, particularly as lawmakers look to fix DACA as part of a broader comprehensive immigration reform bills.

“Go get DACA,” Trump said Wednesday. “Go push those Democrats. I'm telling you… This is a moment for DACA and for all of us, but this is a very special moment.”

House Majority Whip Steve Scalise, R-La. said last week that members are moving forward with a plan that would address DACA and the president’s other priorities of building a southern border wall, ending so-called “chain migration” and changing a federal immigration program from a lottery to a merit-based system.

A nationwide injunction in January by a federal judge in San Francisco requires the Trump administration to resume renewing the legal status of the hundreds of thousands of illegal immigrants -- brought to the U.S. by their parents and protected under DACA. However, that order does not apply to first-time applicants.

Senate Democrats forced a three-day government shutdown in January when they refused to pass a temporary spending bill that did not include a DACA fix. Ultimately, they voted for the bill in exchange for a Republican promise to allow an open process on immigration reform.

That process has so far yielded a number of proposals, all of which have failed to gain enough support in the Senate to pick up the 60 votes needed. Senate Majority Leader Chuck Schumer, D-N.Y., accused Trump last month of trying to spike a deal when he rejected one of the bipartisan proposals as a "total catastrophe."