President Trump came out swinging Saturday evening at a rally in Nevada.

"The bottom line is, when we win, America wins," the president told a crowd of supporters in Minden, about 50 miles south of Reno, as part of a push to flip Nevada red this November.

Trump immediately called Nevada Gov. Steve Sisolak a "political hack" after sparring with the Democrat over a rally originally scheduled for an airport hangar in Reno earlier this week, which the Trump 2020 Campaign was forced to cancel because of the governor's 50-person limit on outdoor gatherings amid the coronavirus.

"The bottom line is, when we win, America wins."

The rally was moved to an airport hangar in Minden, near Lake Tahoe.

State Republicans blamed the governor for trying to hurt Trump’s reelection chances, but the Reno rally was canceled by airport officials.

“This is the guy we are entrusting with millions of ballots, unsolicited ballots, and we’re supposed to win these states. Who the hell is going to trust him?” Trump asked the crowd about Sisolak, before suggesting again that Democrats would rig the election through mail-in ballots. However, U.S. Postal Service and state election officials say mail-in voting is safe and secure.

TRUMP SPEECH AT MICHIGAN RALLY INTERRUPTED BY 'WE LOVE YOU' CHANT

Trump told the audience he took deep offense at Joe Biden for an ad the Democratic nominee did about a magazine story that said Trump had called fallen service members "suckers" and "losers."

"There’s nobody who loves our military, respects them more than me. There were 25 witnesses on the record that said it never happened," Trump said of former and current staff members who defended his character.

Trump called Biden a “pathetic human being” for running the ad. “They’re a disgrace, but you know the good part, now I can be really vicious.”

He added because of the ad, he felt he didn't need to be "nice" anymore.

"Joe Biden cannot lead our country 'cause he doesn't really believe in our country," he said. "He is the worst candidate in the history of presidential politics."

"Joe Biden cannot lead our country 'cause he doesn't really believe in our country."

Trump claimed that the Democrat’s running mate, Sen. Kamala Harris, D-Calif., would be president “in about a month” if Biden won, asserting that the former vice president would be a figurehead and that Harris would hold power.

He claimed that the media would treat Biden “like Winston Churchill” if he was able to merely stand on the debate stage on Sept. 29. And embarking on a swing that will also include stops in Las Vegas, Phoenix and California, Trump mocked Biden’s slower travel schedule amid the pandemic.

The president reiterated that Biden, if elected president, would run suburbanites out of their homes by allowing Antifa to move in. "Don't let them ruin the suburbs!" he told the crowd.

He said Democrats want to allow churches to burn while letting agitators riot in the streets.

“These are far-left lunatics that Biden selects to staff his government," he said of rioters.

He said unlike Biden he would always stand with the "heroes in law enforcement." Trump didn't mention any of the alleged cases of police brutality that have sparked the protests across the country.

He also suggested that the "phony" polls showing him trailing Biden are an attempt at voter suppression.

"My people won't be suppressed!" he said to the cheering crowd.

He told the crowd they should become poll workers in November. “With you people watching the polls it’s going to be pretty hard to cheat," he laughed, adding that Democrats would still find a way to cheat.

He also mentioned polls showing him doing better with Hispanics, which would be key to a victory in Nevada.

While mentioning a list of potential Supreme Court justices he put out -- including Sens. Ted Cruz and Tom Cotton -- Trump claimed Biden would appoint "radical left maniacs" to the court.

He mentioned that he will be heading to California on Monday and said everyone's hearts are with those affected by the wildfires but said the key to keeping fires at bay is "forest management."

The president also expressed concerns over wind power and windmills while talking about renewable energy, saying they kill birds, break down too quickly and he joked that electricity powered by windmills wouldn't work if it wasn't windy. He said he likes solar power but claimed it's too expensive.

Trump said the country was "rounding the corner" on the coronavirus that has killed more than 190,000 Americans.

“If this was Sleepy Joe and Obama you wouldn’t have a vaccine for 3 years," he claimed. He has suggested a vaccine could be ready before the end of the year.

However, Fauci disagreed last week that the pandemic is nearly over, saying that Americans need to "hunker down" during the fall and winter when the flu season could make battling the pandemic even more difficult. 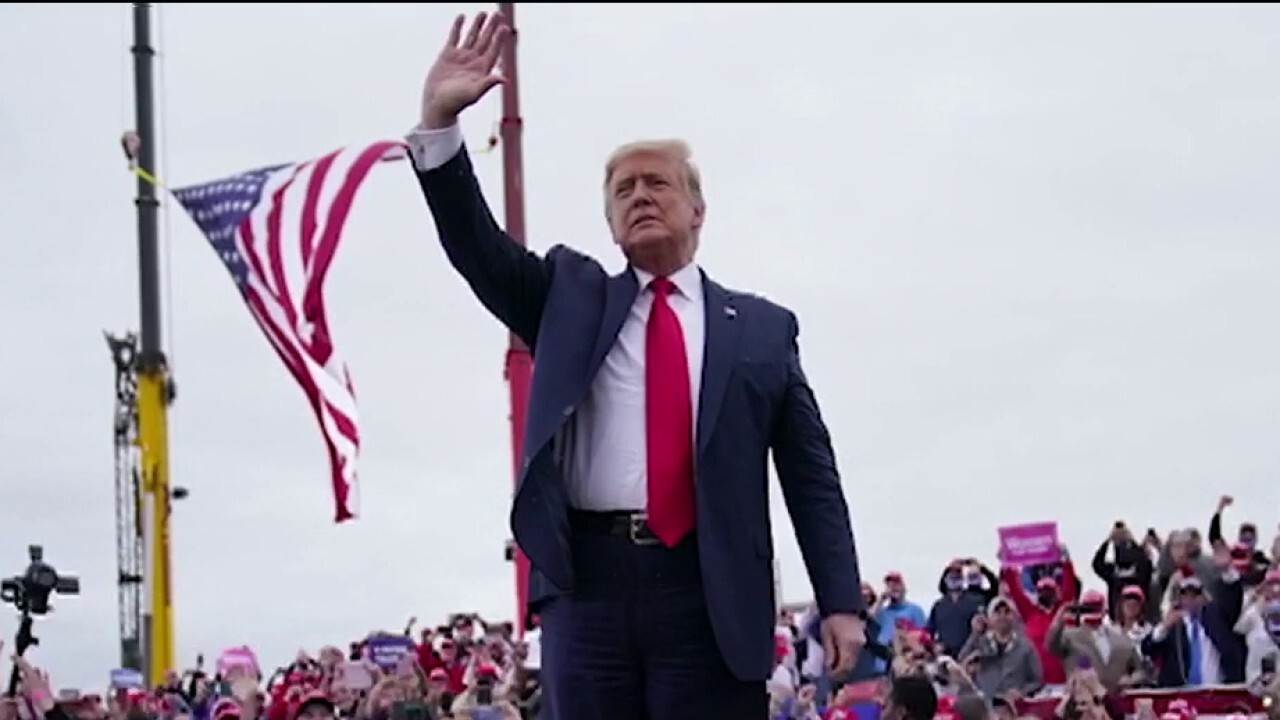 Several thousand people covered the tarmac in Minden, including Tom Lenz, 64, of Sparks, Nev., who said he didn’t vote for Trump last time.

“But I will this time. I think he knows what he’s doing,” said Lenz. “He’s pro-faith, pro-life, he’s made more peace in the world. Biden can’t even talk.”

Trump told the crowd "Joe Biden has been on the wrong side of history for 47 years," while mentioning Biden's vote for the Iraq War in 2003 and his own administration's successes against ISIS.

"Never forget they're coming after me cause I am fighting for you!" He told his supporters, adding in his second term he would make America the manufacturing leader of the world, bring back jobs, hire police, ban sanctuary cities, and appoint conservative judges. "We want law and order. We have to have it!" he said.

"We will uphold religious liberty, free speech and the right to keep and bear arms," he said, adding that he's bringing troops home and will end "endless wars" and will even put the first woman on the moon.

He said his administration will teach children to always respect the American flag.

The president lost Nevada’s six electoral votes to Hillary Clinton in 2016 by 2 percentage points, but the campaign has invested heavily in the state to change the outcome this go-around.

Nevada hasn’t voted for a Republican president since 2004.

“The Democrats are scared. They know President Trump has the momentum," said the state GOP chairman, Michael McDonald.

Some Democrats are concerned about possible Trump gains in Nevada, with the president showing increasing support from Latinos and non-college educated white voters, two important constituencies in the state.

The president plans to host a “Latinos for Trump” roundtable Sunday morning in Las Vegas, followed by an evening rally at a manufacturing facility in neighboring Henderson.

Trump also scheduled a high-dollar fundraiser in Las Vegas this weekend, where couples were asked for $150,000 to attend.