President Trump accused his Democratic critics of "politicizing" the coronavirus virus as he rallied supporters in North Charleston a day before the Democratic primary in South Carolina.

Speaking at the North Charleston Coliseum for more than an hour, Trump dismissed the complaints from Democrats about his handling of the virus as “their new hoax” and insisted “we are totally prepared.” He also mocked the party for its chaotic efforts to count the votes earlier this month in Iowa's caucuses.

“Now the Democrats are politicizing the coronavirus,” Trump said, adding: “They can’t even count their votes.”

Speaking at length about the virus, Trump said it “starts in China, bleeds its way into various countries around the world, doesn’t spread widely at all in the United States because of the early actions” of his administration. But still, Trump argued, the Democrats are claiming that “it’s Donald Trump’s fault.”

Turning to the 2020 race, Trump took an informal poll of the crowd over who they would prefer he run against in November. The president argued that despite the many candidates still in the race, the fight for the Democratic nomination is really down to former Vice President Joe Biden and Vermont Sen. Bernie Sanders.

"Who the hell is easier to beat?” Trump asked the crowd, going on to use nicknames "Crazy Bernie" for Sanders and "Sleepy Joe” for Biden. 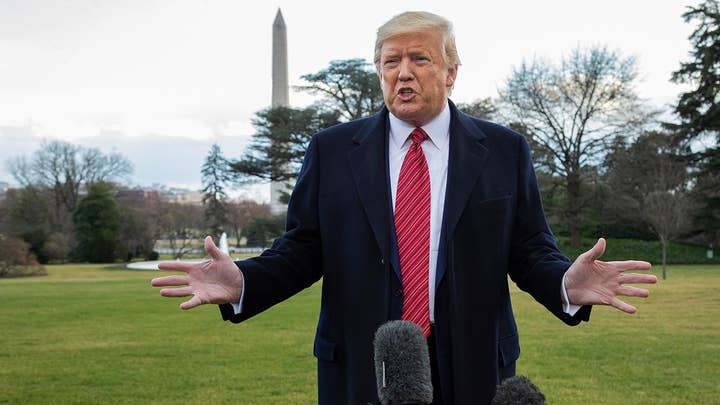 As he left the White House on Friday afternoon, the president said of the Democratic contest: “It’ll be very interesting to see what happens tomorrow.” Trump then referenced the Super Tuesday contests on March 3, saying: "On Tuesday, you have a very big day."

While en route to South Carolina, Trump tweeted an announcement that he is nominating Texas Rep. John Ratcliffe to serve as Director of National Intelligence (DNI), months after the Republican lawmaker abruptly withdrew his name from consideration for the post.

Trump has held rallies in each of the four early voting states for the presidential nomination. He went to Nevada last week, even though Republicans had canceled their presidential caucus to show allegiance to the president. Likewise, South Carolina GOP officials opted not to hold a primary this year.

But that's not stopping Trump, who has reveled in poking his challengers in the run-up to their contests.

"Some people say I'm trolling the Democrats and maybe I am," Trump said at the White House.

Unlike the three earlier voting states, South Carolina is not considered a swing state. Trump defeated Hillary Clinton by more than 14 percentage points there in 2016.

Trump arrived in South Carolina following a brutal week for the stock market. Stocks dropped another 357 points Friday, extending a rout that handed the market its worst week since October 2008, at the height of the financial crisis.

Analysts worry that the stock swoon could cause consumer spending to contract. Such spending makes up some 70 percent of the economy and has played a huge role in keeping the U.S. economic expansion going.

Trump has linked his presidency to the markets through tweets and speeches, often taking credit for each new high in the indices. Now, Trump is trying to reassure Americans that the economy is still strong while also theorizing that the Democratic candidates' debate performances have spooked investors.

The coronavirus virus has infected more than 84,000 people globally and caused more than 2,800 deaths.