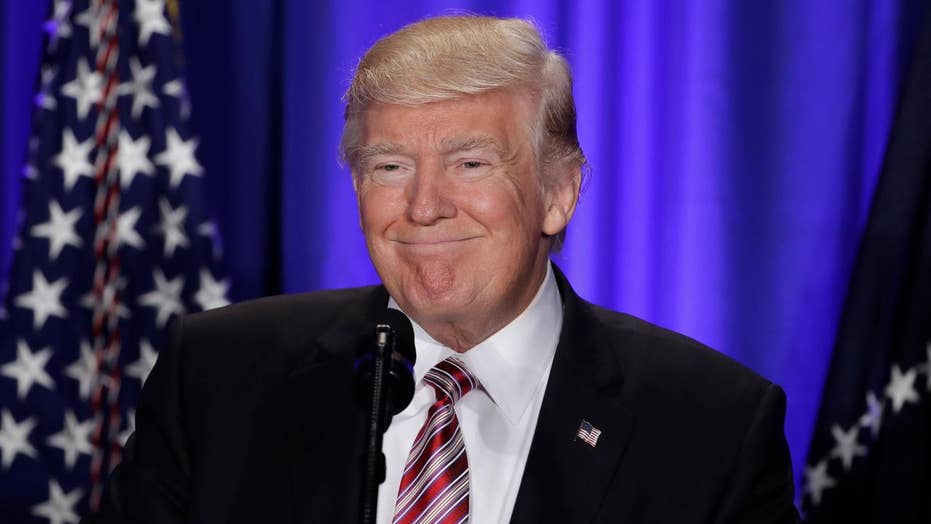 Trump tells GOP lawmakers: Now we have to deliver

PHILADELPHIA – President Trump told congressional Republican leaders on Thursday that he stands “shoulder-to-shoulder” with them in pursuing an ambitious agenda for the American people, casting his busy first week as the start of an even busier session.

“This Congress is going to be the busiest Congress we’ve had in decades, maybe ever,” Trump told the GOP leaders in Philadelphia, at their annual legislative retreat. “This is our chance to achieve great and lasting change for our beloved nation.”

Trump, just one week into his presidency, has grinded through a litany of campaign pledges, signing executive actions to jump-start movement on: repealing and replacing ObamaCare, building a wall along the U.S.-Mexico border, reevaluating trade deals and reducing regulations.

“We are here for the people. … I am honored to be your partner in this amazing quest. I am privileged to stand shoulder-to-shoulder as we work every day to make America great again,” Trump said.

Trump vowed that leaders of the GOP-controlled Congress -- now that President Obama is gone – will no longer write legislation that has no chance of being signed into law.

The president opened his roughly 30-minute speech boasting about his surprise November win in Democrat-leaning Pennsylvania, calling it the “bride that got away” for GOP presidential candidates for nearly three decades.

As usual, Trump was more than willing to throw himself into controversy, suggesting as he has in recent days that his administration will review the 2016 White House race for potential voter fraud despite little evidence so far that it was significant.

“We are going to protect the integrity of the ballot box,” he said.

Trump also talked about recently signed executive orders to ease the regulatory burden of ObamaCare, crack down on illegal immigration, and get the United States out of the international trade deal known as the Trans-Pacific Partnership.

He said he will instead broker better, one-one-one deals with countries.

On efforts to withhold federal funds from so-called “sanctuary cities” in the U.S. that protect illegal immigrants from deportation, Trump said, “The hour of justice for the American worker has arrived.”