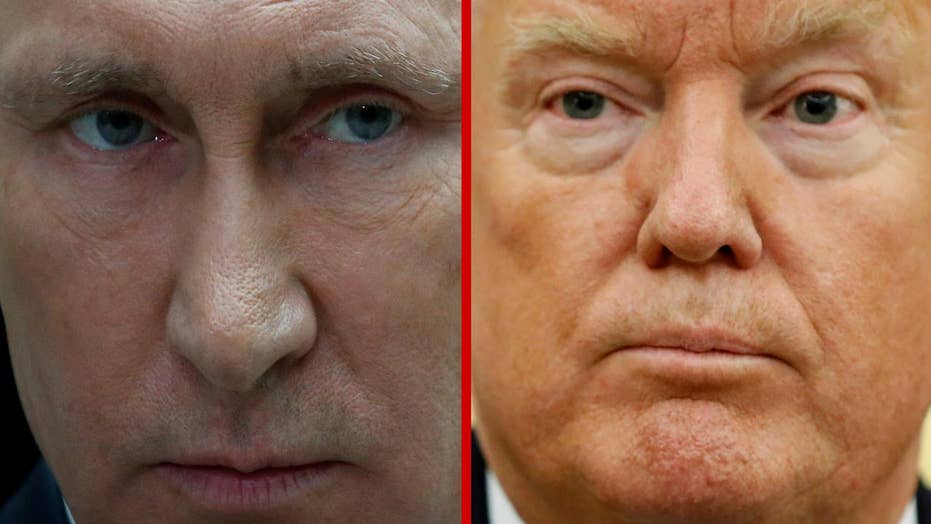 Trump and Putin: Advice ahead of their meeting

President Trump and President Putin are expected to meet face-to-face for the first time since the election. Fox News takes to the streets looking for advice

Trump is in Europe this week for the Group of 20 (G-20) summit with scores of other world leaders. He'll meet with Putin in Germany on Friday. Rarely in recent history has a meeting of two heads of state generated this much anticipation.

While the two world leaders haven't met face-to-face before, Putin has been the subject of several dozen tweets from Trump in the past.

From the presidential campaign to current events, Trump has often used his Russian counterpart to attack political opponents and promote his business endeavors on social media.

Here’s a look at some of the times Putin made it onto Trump’s Twitter feed — and why.

Russia’s interference with the U.S. election

Trump has repeatedly pointed out Putin’s alleged connections to Democratic lawmakers in an attempt to prove that he did not collude with the Russian government as it interfered in the 2016 presidential election.

“We should start an immediate investigation into [Sen. Chuck Schumer, D-N.Y.] and his ties to Russia and Putin. A total hypocrite!” Trump tweeted March 3, 2017.

On July 27, 2016, during the presidential campaign, Trump blasted the New York Times for pushing the narrative “that Russia is working for me because Putin said ‘Trump is a genius.’”

“The new joke in town is that Russia leaked the disastrous DNC e-mails, which should never have been written (stupid), because Putin likes me,” Trump tweeted that same month.

Trump has also said that he doesn’t know Putin.

“Vladimir Putin said today about Hillary and Dems: ‘In my opinion, it is humiliating. One must be able to lose with dignity.’ So true!” Trump tweeted on Dec. 23, 2016.

During the presidential campaign, Trump often called fellow Republican candidate and former Florida Gov. Jeb Bush “low energy” and “weak.” And he used Putin as another route to attack his opponent.

“Just watched Jeb's ad where he desperately needed mommy to help him. Jeb --- mom can't help you with ISIS, the Chinese or with Putin,” Trump tweeted on Jan. 22, 2016, referencing a campaign ad that featured former first lady Barbara Bush.

And when Bush was cut off during a campaign event, Trump used the moment to wonder, on Twitter, if that was a sign that he wouldn’t be “tough on Putin.”

After the shooting death of Michael Brown, an unarmed black man, during an altercation with police, days of protests and unrest rattled the town of Ferguson, Missouri.

Protesters took to the streets for several weeks in August and November 2014, and Trump took to Twitter to wonder what Russia’s leader thought.

“Can you imagine what Putin and all of our friends and enemies throughout the world are saying about the U.S. as they watch the Ferguson riot,” Trump tweeted on Nov. 25, 2014.

Trump has often contrasted former President Barack Obama to Putin and used the Russian leader to mock the U.S. president — even before Trump announced his own bid for the White House.

Trump has tweeted that Putin is “laughing” at a speech Obama made and “toying with Obama” by granting asylum to National Security Agency whistleblower Edward Snowden.

TRUMP, IN POLAND, VOWS 'THE WEST WILL NEVER, EVER BE BROKEN'

“President Obama was able to fool the Americans by getting elected, but not able to fool Vladimir Putin. Too bad for us!” Trump tweeted on March 20, 2014.

“While Putin is scheming and beaming on how to take over the World, President Obama is watching March Madness (basketball)!” Trump added later that same day.

Later in March 2014, Trump said it was “President Obama’s failed leadership” that “put Vladimir Putin and Russia back on the world stage.”

And in 2013, the beauty pageant was held in Moscow.

“Do you think Putin will be going to The Miss Universe Pageant in November in Moscow - if so, will he become my new best friend?” Trump said on June 18, 2013.