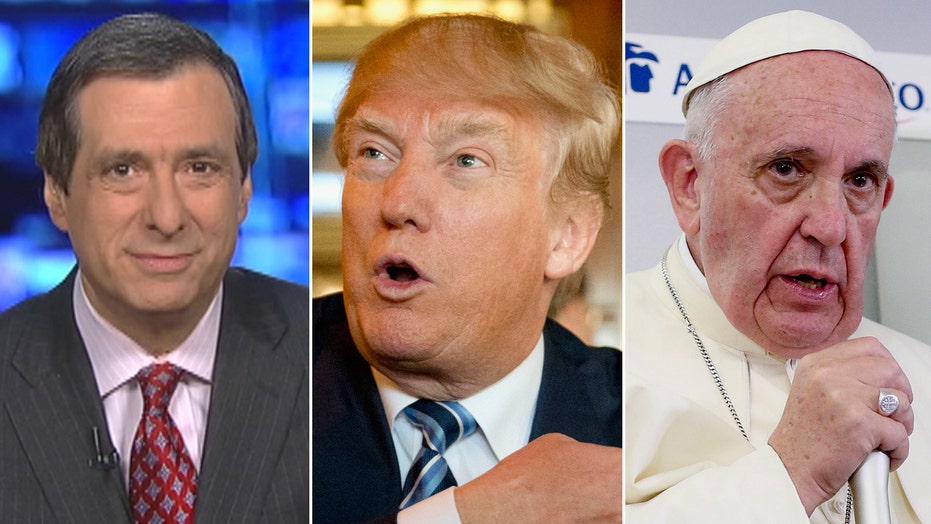 Kurtz: The Donald vs. The Pope

Maybe Donald Trump was bored by boxing with Cruz, Rubio and Jeb and decided to punch up.

Maybe it was a heavenly gift that enabled Trump to hijack the news cycle once again.

Maybe it’s that the Pope landed the first blow.

Whatever the case, the Republican presidential front-runner is now engaged in a war of words with the leader of the Catholic Church.

I was stunned by this turn of events, which instantly blew other political stories off the media radar. Let’s put it this way: Suddenly, there’s not that much chatter about Nikki Haley endorsing Marco Rubio.

My initial reaction was to ask a question that’s been repeatedly raised since Trump got into the race. Has he finally, this time, gone too far?

Who picks a fight with the pontiff two days before a South Carolina primary in which you’ve got a big lead?

But it’s a little more complicated than that.

When Pope Francis visited America last fall, some conservatives objected to the way he injected himself into U.S. politics with what they view as left-of-center views on climate change, divorce and abortion. While the Pope also made comments that lean to the conservative side, he is identified with a message of tolerance as summed up in his response to a question about gays: “Who am I to judge?”

He is, apparently, willing to judge Donald Trump.

The stage was set when the Pope visited the Mexican side of the U.S. border and what he called a humanitarian crisis. When a Reuters reporter on the flight back to the Vatican asked about Trump, the pontiff declined to say whether Americans should vote for him, but added:

“A person who thinks only about building walls, wherever they may be, and not building bridges, is not Christian. This is not in the gospel.”

The Pope said he would give Trump the benefit of the doubt until he saw what the billionaire has said. “I say only that this man is not Christian if he has said things like that.”

Trump did not turn the other cheek.

In a statement that he read in South Carolina, Trump said:

“If and when the Vatican is attacked by ISIS, which as everyone knows is ISIS’s ultimate trophy, I can promise you that the Pope would have only wished and prayed that Donald Trump would have been president because this would not have happened.”

Blaming disparaging remarks by the Mexican government, Trump said: “The Pope only heard one side of the story - he didn’t see the crime, the drug trafficking and the negative economic impact the current policies have on the United States.”

And then there was this: “For a religious leader to question a person’s faith is disgraceful. I am proud to be a Christian.”

Let’s just say Trump didn’t tone down his comments in taking on the world’s most famous religious leader. He stuck to his mantra of hitting back harder whenever he is hit.

On the other hand, Pope Francis did take a pretty hard shot in suggesting that Trump is “not Christian.” He could have taken issue with the candidate’s stance on immigration, or lack of charity toward the less fortunate, without challenging his religion—one of the strongest things a pope can say.

Since the other leading Republican candidates have similar policies on protecting the border, one could infer that Francis, who got along well with President Obama, has a particular dislike for Trump.

Trump softened his remarks last night on CNN, as he sometimes does after going nuclear. He said the Pope's actual remarks were softer than he had realized and blamed the press for overhyping them.

The worst interpretation for Trump: He alienated some Catholic voters (who are in a minority in South Carolina), and perhaps raised questions among evangelicals, among whom he is leading Ted Cruz in the state--although some may not be fans of the Vatican. Trump seems disrespectful in squaring off against a moral leader.

The best interpretation for Trump: He showed strength by not backing down, even against a pope. He reinforced his signature stance about building a wall at Mexico’s expense. And he stomped on any news that Rubio, Cruz or Bush might make in the closing days.

How will this play out in Saturday’s voting? Only heaven knows.