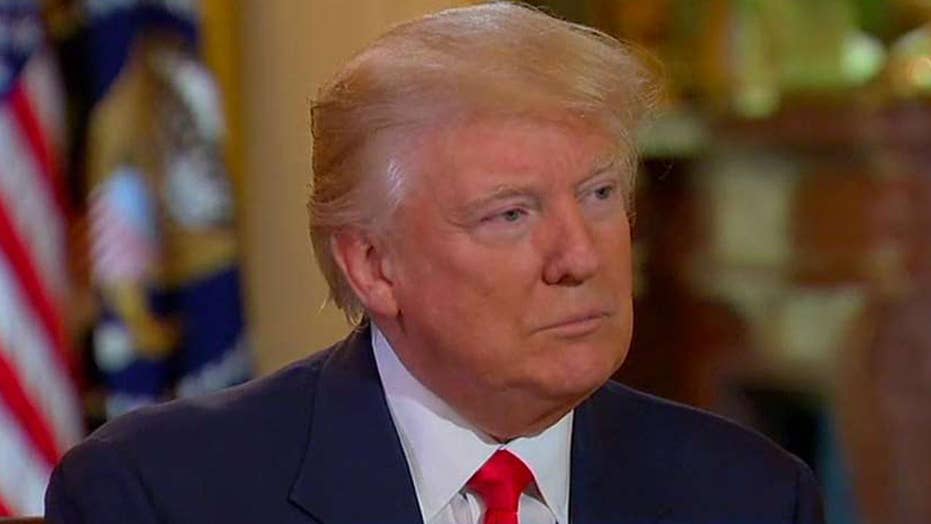 President Trump reflects on his first month in office

The president opens up on 'Fox & Friends'

President Trump returned fire at House Minority Leader Nancy Pelosi in an exclusive interview Tuesday, calling the California Democrat “incompetent” and forecasting the dissolution of the Democratic Party on her watch.

Trump’s remarks, during an interview with “Fox & Friends,” came in response to Pelosi’s charge Sunday on ABC's “This Week” that the Trump administration has “done nothing except put Wall Street first, make America sick again, instill fear in our immigration population in our country and make sure Russia maintains its grip on our foreign policy.”

Trump shot back with typical bravado.

“Well, I’ve been watching Nancy’s tape, and so I think she’s incompetent, actually,” Trump said. “You know, if you look at what’s going on with the Democrats and the party, it’s getting smaller and smaller.”

The comments about the Democratic Party come after years of historic Republican gains in state legislatures, and national elections that have handed the Republican Party control of the White House, Senate and House of Representatives. Democrats previously held control of all three after the 2008 election that sent former President Barack Obama to the Oval Office. That power began eroding in 2010 amid the Tea Party movement.

He added of Pelosi: “But she’s done a terrible job.”

VIDEO: TRUMP GIVES A TOUR OF THE WHITE HOUSE

A Pelosi spokesman countered Trump in a statement later Tuesday morning, accusing the president of “projecting his incompetence” onto the lawmaker.

Asked specifically about Pelosi’s earlier accusations that Trump hadn’t accomplished anything of value during his first few weeks in office, Trump said Pelosi was not “a good spokesman.”

“She’s certainly wrong,” said Trump, whose flurry of executive actions have prompted nationwide protests from opponents and cheers from supporters. “There are those that say I’ve done more than anybody in 100 days.”