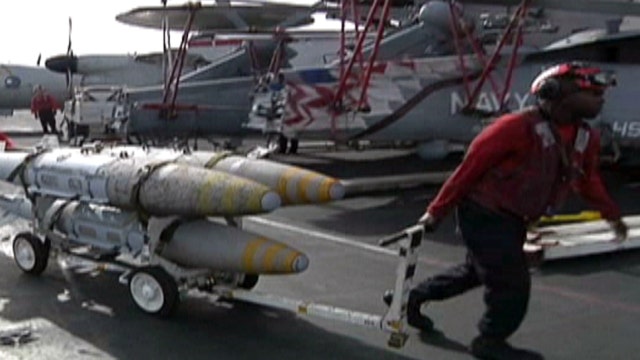 A look aboard the USS Truman

President Trump on Wednesday said he is overturning the military’s plan to decommission the U.S.S. Harry S. Truman, promising it will be updated “at the fraction of the cost of a new one” instead.

“I am overriding the Decommission Order of the magnificent aircraft carrier Harry S. Truman, built in 1998 (fairly new), and considered one of the largest and finest in the world,” the president tweeted. “It will be updated at a fraction of the cost of a new one (which also are being built)!”

The Navy announced plans to scrap the aircraft carrier in February as part of a cost-saving move to bring in more advanced aircraft carriers. The Navy said that the move not to refuel the Truman (with a new nuclear reactor normally done at the mid-point of ship’s life after 25 years) and retire her early would save $30 billion.

Adm. John Richardson defended the move this week, saying that it was important to keep Navy technology moving.

“So, we're trying to move, and that is exactly the decision dynamic with respect to what’s more relevant for the future,” the admiral said, according to The Washington Examiner. “Is it going to be the Harry S. Truman and its air wing where there’s a lot of innovation taking place, or is it something else?”

But lawmakers on both sides of the aisles opposed the decision, and Vice President Mike Pence on Tuesday visited the Truman in Norfolk, Va., to announce Trump’s decision.

“We are keeping the best carrier in the world in the fight. We are not retiring the Truman,” Pence announced to applause. “The U.S.S. Harry S. Truman is gonna be giving ‘em hell for many years to come.”

Last fall the Truman became the first American aircraft carrier to conduct flight operations above the Arctic Circle in nearly 30 years to send a message to the Russians, according to officials.