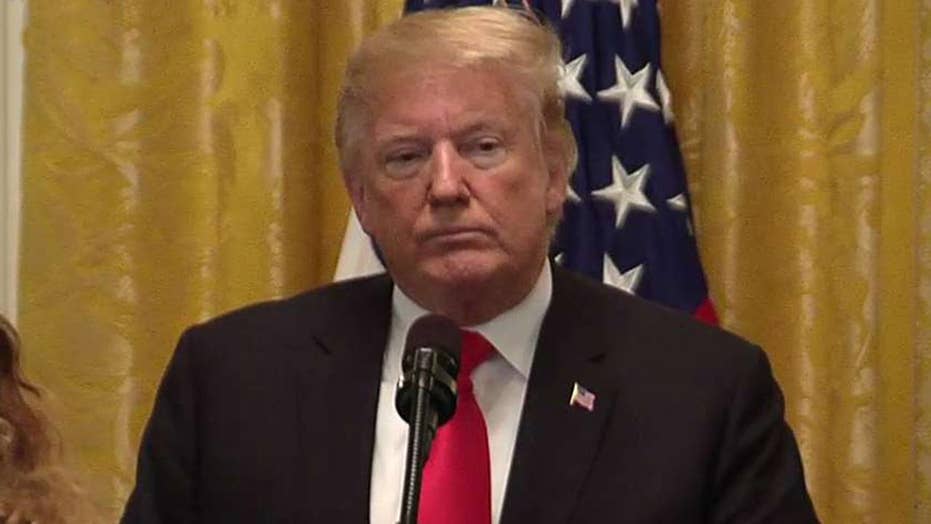 Trump: Journalists should be free of fear of attack

President pledges support to the families of the victims of the Capital Gazette newsroom shooting, says the administration will do everything in its power to reduce violent crime and protect innocent life.

President Trump on Tuesday ordered American flags lowered in honor of the victims of last week's shooting rampage at a Maryland newspaper, after the mayor of Annapolis claimed the president initially rejected a request to do so.

“Our Nation shares the sorrow of those affected by the shooting at the Capital Gazette newspaper in Annapolis, Maryland,” Trump said in a proclamation released by the White House. “Americans across the country are united in calling upon God to be with the victims and to bring aid and comfort to their families and friends.”

On Monday, Annapolis Mayor Gavin Buckley told the Baltimore Sun that Trump had denied his request to lower flags.

Vigil held for those killed in Capital Gazette shooting

A community gathers together to mourn the loss of five people gunned down in Thursday's newsroom shooting. Lea Gabrielle reports.

“Obviously, I’m disappointed, you know? … Is there a cutoff for tragedy?” Buckley told the newspaper. “This was an attack on the press. It was an attack on freedom of speech. It’s just as important as any other tragedy.”

Later Tuesday, Trump ordered that the flag of the United States “shall be flown at half-staff at the White House and upon all public buildings and grounds, at all military posts and naval stations, and on all naval vessels of the federal government in the District of Columbia and throughout the United States and its territories and possessions until sunset.”

The flag is also ordered lowered abroad at embassies, legations, consular offices and other facilities, the White House said.

Five people were killed in the Thursday attack.

“Journalists, like all Americans, should be free from the fear of being violently attacked while doing their job,” Trump said last week.