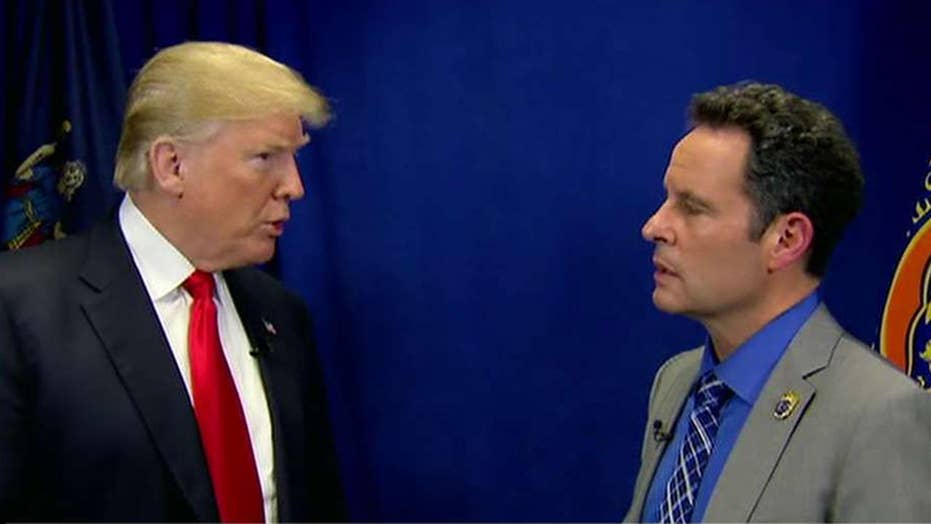 Trump: We have the worst immigration laws in the world

President Trump blasted the entire U.S. immigration system as “corrupt” on Thursday, complaining in an exclusive Fox News interview about the practice of immigration case trials that has led to a huge backlog.

Speaking to “Fox & Friends” in an interview aired Thursday, the president said many illegal immigrants won't even attend the trials, and yet "you need thousands of judges based on this crazy system."

He added, "How do you hire thousands of people to be a judge?  So it’s ridiculous.”

Trump vowed to “change the system” for the “good of our country.”

Meanwhile, the president doubled down on his tough comments about MS-13 gang members being "animals," while slamming immigration policies like chain migration and the visa lottery system.

The interview aired following his participation in a roundtable on Wednesday in Long Island, N.Y. The roundtable featured top law enforcement figures as well as families of gang victims.

“A lottery is ridiculous, you know. I mean, they take people from the lottery where you can imagine these countries are not putting their finest in that lottery, so I don’t like the lottery,” Trump told “Fox & Friends” host Brian Kilmeade. “Chain migration is a disaster, and you look at what’s going on where somebody comes in who’s bad and yet they’ll have 23 members of a family, not one of them do you want in this country.”

Chain migration happens when immigrants can enter the country thanks to a relative already living in the U.S. The Visa Lottery Program offers a lottery for up to 50,000 immigrant visas annually, “drawn from random selection among all entries to individuals who are from countries with low rates of immigration” to the U.S., according to U.S. Citizenship and Immigration Services.

Trump has been vocal throughout his administration, with support of congressional Republicans, in pushing to tighten these laws, and potentially shift to a merit-based system for immigrants seeking entry to the U.S.

The president also pivoted to the Russia investigation, blasting former FBI Director James Comey. The former FBI chief weighed in on the latest developments in the probe on Wednesday, following revelations that the FBI had an informant in contact with Trump campaign members.

Comey tweeted that “attacks on the FBI and lying about its work will do lasting damage to our country. How will Republicans explain this to their grandchildren?”

When asked for a reaction to Comey’s tweet, Trump said: “Well, I’d actually say—how is he going to explain to his grandchildren all of the lies, the deceit, all of the problems he has caused for this country.”

“I think of the things that I’ve done for the country, the firing of James Comey is going to go down as a very good thing,” Trump said. “The FBI is great. I know so many people in the FBI. The FBI is a fantastic institution, but some of the people at the top were rotten apples. James Comey was one of them.”

Trump added: “I’ve done a great service for this country by getting rid of him, by firing him.”