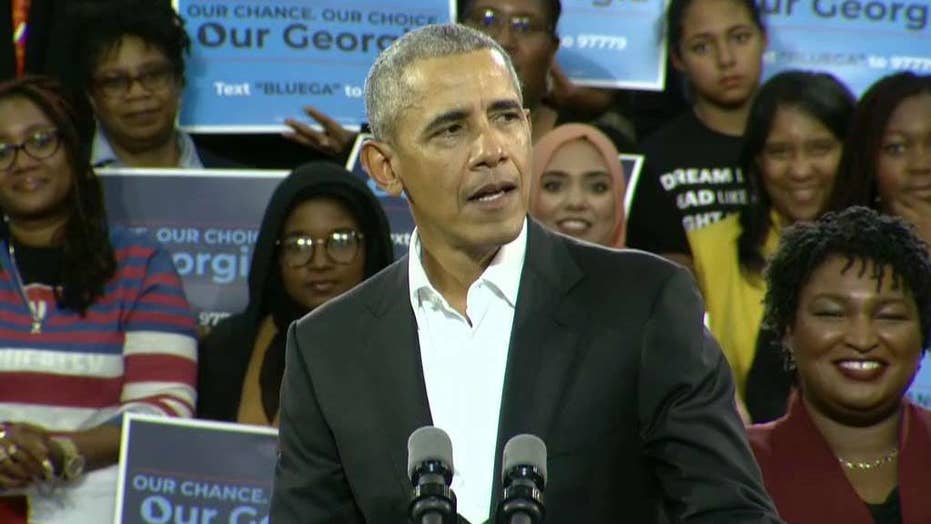 Former President Obama claims military is being misused at the border.

President Trump and former President Obama faced off in dueling campaign rallies for the second time on Friday evening, when the pair spoke to crowds in Indianapolis and Atlanta, respectively, to highlight why voters should elect their party’s candidates.

Obama, while speaking at a rally for gubernatorial candidate Stacey Abrams and other Democrats, stressed the significance of next week’s midterm vote, saying that it could be “the most important election of our lifetime.

“The consequences of any of us staying home really are profound,” he said.

With voting just days away - and early voting already taking place in many states - there have been “nonstop attempts to divide us,” Obama said.

“In four days, you can tap into the better angels of our nature. You can be a check on bad behavior. You can choose a bigger, more prosperous, more generous vision of America,” he said. “A vision where love and hope overcome hate. An America where we, the people of these United States, whatever we look like, whatever our last name is, however our parents came to this country, we can come together to shape our country’s course.”

Throughout Obama’s speech, he echoed comments he made at his earlier rally in Florida Friday, saying Republicans “didn’t start” the nation's recent economic growth.

He also talked about a caravan of Central American migrants headed toward the U.S. and how they have sometimes been portrayed as a danger to the country.

“Now in 2018, suddenly they are telling you that the biggest threat to America, the biggest threat is some impoverished refugees a thousand miles away, on foot, got their babies with them, broke, got no money,” Obama said. “And you know what, that’s not enough just to lie about it. Now they’re sending our brave troops, who, by the way by law, cannot enforce laws on domestic soil. They’re sending them down there for a political stunt when they could be with their families. The men and women of our military deserve better than that.”

Trump, however, campaigning in Indiana for Rep. Mike Braun and his run for Indiana senator, said the decision was a stark one.

“I need you to vote for a Republican House and a Republican Senate so we can continue this movement,” he said.

“I keep hearing about this blue wave, coming across the heartland,” Vice President Mike Pence said earlier in the night, prior to Trump speaking. “I think that blue wave is going to hit a red wall, right here in the Hoosier State, when we send Mike Braun to the United States Senate.”