President Trump will meet Monday in Washington with Israeli Prime Minister Benjamin Netanyahu with hopes of soon reaching a long-sought Mideast peace agreement, as both world leaders try to make international progress amid the strains of domestic investigations into each of their governments.

Trump and Netanyahu, who have met several times before, are expected to discuss a range of issues beyond Israeli-Palestinian peace, with Iran, Syria and now North Korea topping their list.

Trump is attempting to act on international issues and negotiate with world leaders amid ongoing federal probes into whether anybody on his 2016 presidential campaign colluded with Russia to win the White House race, while Netanyahu is facing allegations of corruption that have resulted in calls for his resignation.

“The two might actually find this a bonding experience,” Alan Mendoza, a national security expert who founded the British think tank the Henry Jackson Society, said Sunday on Fox News’ “America’s News HQ.” Mendoza also pointed out that Netanyahu has not been charged in the corruption probe and that he’s been investigated “many, many times.”

Another factor in the effort to strike a peace deal is that Jared Kushner, the White House’s point man on the issue and Trump’s son-in-law, last week had his security clearance downgraded. 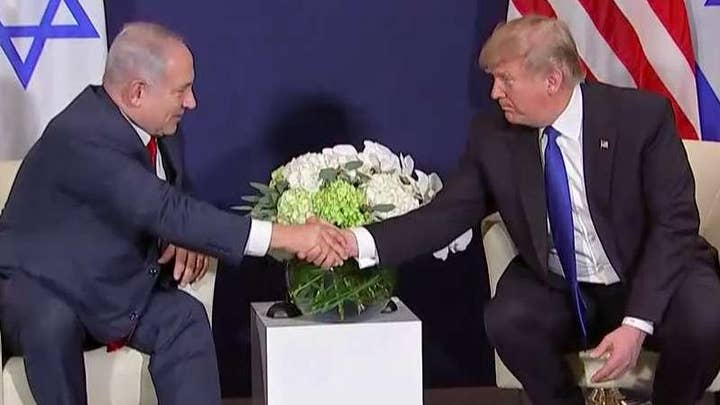 Kushner and a small team have spent the past year preparing a much-awaited blueprint for peace. But no major details have emerged, which has caused concern about whether the plan ever would emerge. And, former negotiators say Kushner's downgraded status could severely impair his ability to broker a peace deal.

Israel recently gave thunderous support for Trump's decision to relocate the U.S. Embassy in Jerusalem and recognize the disputed city as Israel's capital.

But the White House’s relationship with the Palestinians at that time already was strained, and the announcements only reinforced impressions that Trump could be biased against them.

"A mediator will have to mediate between two semi-equal parties. Otherwise it's not a mediation process," said Husam Zomlot, the Palestinian ambassador to Washington, in a recent Associated Press interview. "You have to level the field and level your relationship between the two sides in order to be an honest mediator."

Still, after winning praise in Israel for his Jerusalem proclamation, Trump made clear the Israelis also would have to make concessions.

"You won one point, and you'll give up some points later in the negotiation, if there's ever a negotiation," Trump said in January.

Meanwhile, beneath the veneer of U.S.-Israeli unity, there is lingering disagreement and suspicion.

Israel is increasingly worried that Trump is backsliding on a pledge to "fix" or dismantle the 2015 Iran nuclear deal. Israel also is concerned that behind Trump's tough public stance toward Tehran is an acquiescence to Iran's growing presence in Syria and influence in Lebanon -- two Israeli neighbors. 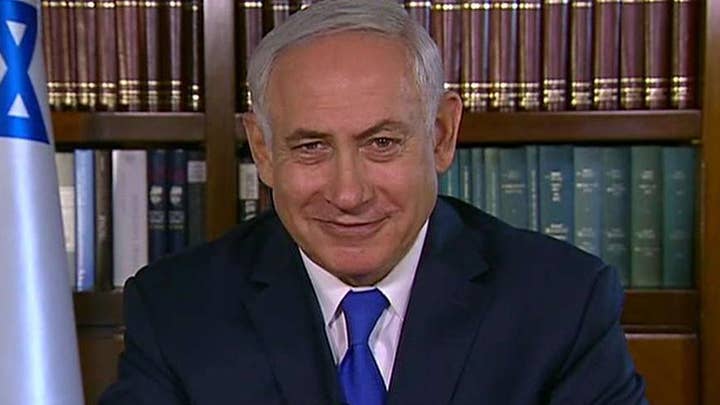 "The Israelis now are undoubtedly sounding the alarm," said Jonathan Schanzer, who researches Iran's regional influence at the hawkish Foundation for the Defense of Democracies. "The assets the Israelis see on the other side of the border to its north -- they are not happy."

Nevertheless, it's in Netanyahu's interest to keep such disputes out of the public eye, said David Makovsky, a former State Department official who worked on Mideast peace negotiations. The Israeli leader faces multiple investigations related to allegations of bribery and corruption.

"It's important for him not to run afoul of Trump," said Makovsky, now at the Washington Institute for Near East Policy. "It's necessary for him to show he's not so engulfed by his own legal problems that he's not functioning as a leader."

Trump and Netanyahu are scheduled to meet Monday amid the annual American Israel Public Affairs Committee policy conference, which brings thousands of pro-Israel officials, lawmakers, activists and academics to Washington.

Vice President Pence, U.N. Ambassador Nikki Haley and Trump's ambassador to Israel, David Friedman, are set to give speeches, and each is likely to hammer away at Iran.

Israel views Iran as an existential threat, and Netanyahu has repeatedly implored Trump to "fix it or nix it" when it comes to the nuclear deal. That agreement, negotiated by the Obama administration and other world powers, rewarded Iran with billions of dollars in sanctions relief for curbing its nuclear program.

Critics, including Netanyahu and Trump, say Tehran got too much for too little. Among the remedies they're advocating: removal of several of the deal's clauses that allow Iran to gradually resume advanced nuclear work starting in 2024.

Trump has said he won't renew U.S. waivers for sanctions when they next expire on May 12 unless European countries agree to a new deal that would force them to punish Tehran if the Iranians resume advanced nuclear work. He wants tougher inspections and penalties for Iranian missile testing.

North Korea’s pursuit of a nuclear warhead and intercontinental missile on which to launch it has created international concerns, too.

Trump said Saturday night, as he’s said before, that he would negotiate with North Korea, which recently was hit with another round of economic sanctions. But he also said any such deal, which almost certainly would include an easing of penalties, must include denuclearization by North Korean dictator Kim Jong Un.

Fox News' John Roberts and The Associated Press contributed  to this report.