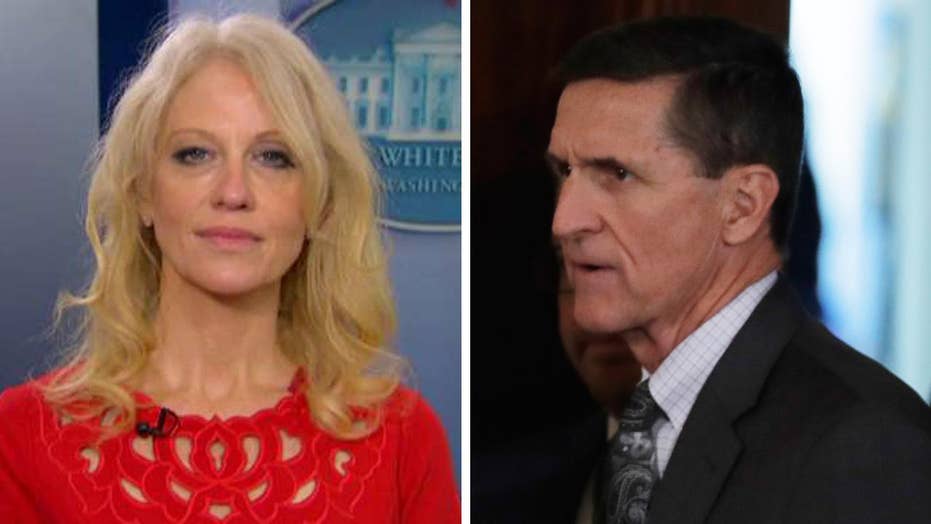 Counselor to the president speaks out on 'Fox & Friends'

President Trump’s embattled national security adviser Michael Flynn resigned Monday night, after days of controversy over his past contact with the Russian ambassador.

Flynn, in his resignation letter, wrote that he "inadvertently" briefed top officials with incomplete information regarding a call with Ambassador Sergey Kislyak.

"I have sincerely apologized to the president and the vice president, and they have accepted my apology," the letter read.

Vice President Mike Pence, after being briefed by Flynn, had said in television interviews that Flynn did not discuss sanctions with the ambassador. Flynn later admitted the issue may have been raised, which escalated the matter from a simmering controversy to a full-blown firestorm -- resulting in Monday night's resignation.

Flynn, separately, told Fox News in an email: "I have nothing to be ashamed for and everything to be proud of."

White House counselor Kellyanne Conway said on Fox and Friends that the situation with Flynn had become "increasingly unsustainable."

"In the end it really was the misleading or the forgetfulness about the characterizing of that conversation that was the lynchpin here," she said.

The White House earlier said Trump was "evaluating the situation" regarding Flynn's conversations with Russia's ambassador to the U.S., deepening the uncertainty surrounding Flynn's future in the new administration.

White House spokesman Sean Spicer said Trump was consulting with Pence about his conversations with the national security adviser. Asked whether the president had been aware that Flynn might discuss sanctions with the Russian envoy, Spicer said, "No, absolutely not."

Trump, who comments on a steady stream of issues on his Twitter feed, has been conspicuously silent about the matter since The Washington Post reported last week that Flynn had discussed sanctions with the Russian envoy. A U.S. official told The Associated Press that Flynn was in frequent contact with Ambassador Sergey Kislyak on the day the Obama administration slapped sanctions on Russia for election-related hacking, as well as at other times during the transition.

Earlier Monday, White House counselor Kellyanne Conway said Trump had "full confidence" in Flynn, though her assertions were not backed up by other senior Trump aides. Spicer would say only that Flynn was continuing to carry out "his daily functions."