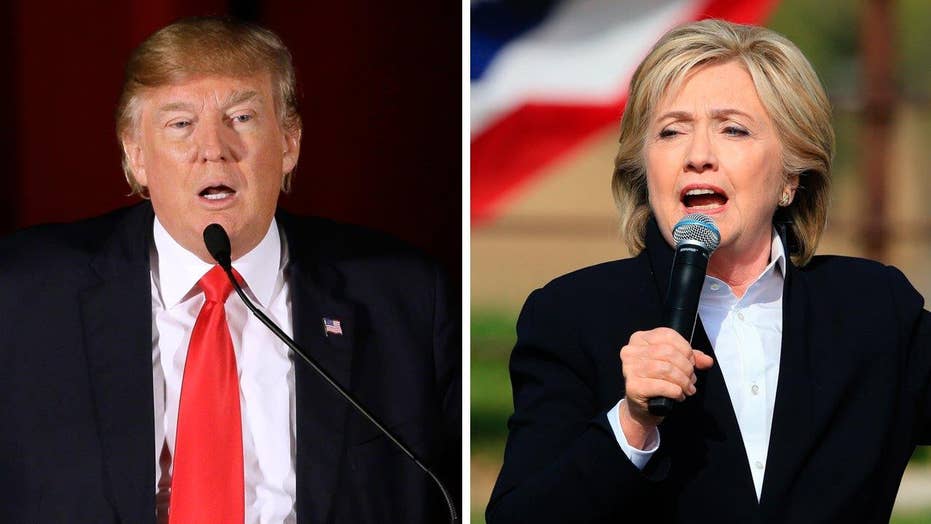 Trump goes on the attack against Hillary Clinton

Donald Trump was rebuked by the Clinton campaign on Tuesday after he used crude language to disparage the Democratic presidential front-runner.

Trump, speaking to more than 6,000 people at a rally in Grand Rapids, Mich., made the comments while discussing Hillary Clinton's 2008 loss in the Iowa caucuses to Barack Obama, who went on to win the Democratic nomination and the White House.

"She was favored to win and she got schlonged, she lost," said Trump. He also mocked Clinton for returning late to Saturday's Democratic debate following a commercial break.

"I thought she quit, I thought she gave up," Trump joked. He added, "I know where she went. It's disgusting, I don't want to talk about it."

Clinton campaign spokeswoman Jennifer Palmieri fired back at Trump on Twitter for his remarks.

We are not responding to Trump but everyone who understands the humiliation this degrading language inflicts on all women should. #imwithher

Late Tuesday, Trump tried to clarify on Twitter the comments he made at the Michigan campaign rally.

Meanwhile, the Republican front-runner called Clinton a "liar" over her claim that the ISIS terror group used videos of his comments about Muslims to recruit militants.

"She's a liar!" Trump said. He also said Clinton was "crooked" and "not a president."

There was no evidence to back the claim, and a spokeswoman later said, "She didn't have a particular video in mind."

Trump argued at Grand Rapids' DeltaPlex Arena that he is the last person Clinton wants to run against in a general election.

"Ask Jeb Bush if he enjoys running against me," he said of the former Florida governor who has been struggling to gain traction despite a massive early fundraising advantage.

"Ask Lindsey Graham, did he enjoy running against Trump?" he said of the South Carolina senator who on Monday announced his departure from the race.

Trump also defended the kind words he's been exchanging with Russian President Vladimir Putin, brushing off criticism that he has been too kind to the Russian president.

"That's, like, a good thing, not a bad thing," he insisted. "Wouldn't it be nice if we could get along, like, with people?"

And he made clear that he is opposed to the killing of journalists, after appearing to brush off concerns about Putin's record on a Sunday morning news show.

"I don't like that, I'm totally against that," said Trump. "By the way, I hate some of these people ... and some of them are such lying, disgusting people, it's true. But I would never kill. And anybody that does I think would be despicable."