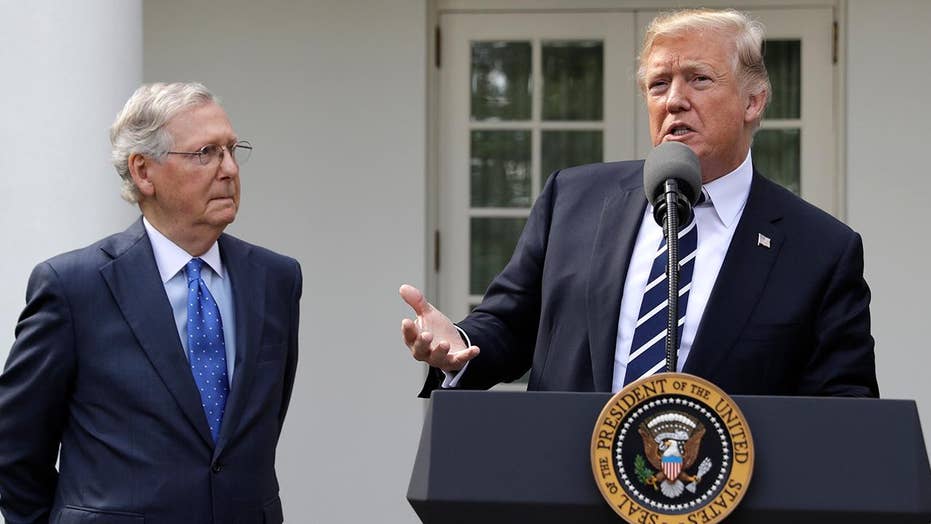 Trump: McConnell and I are fighting for the same thing

President Trump says he has an outstanding relationship with the Republican Senate majority leader, thanks former FEMA director for A grade on hurricane response.

President Trump exited a White House meeting Monday with Sen. Mitch McConnell saying his relationship with the Senate majority leader is “better than ever” and they are working together on major legislative priorities including tax and health care reform.

“We’ve been friends for a long time,” Trump said at a Rose Garden press conference following his meeting with McConnell, with whom he had a public falling out this summer. “We’re fighting for big tax cuts. ... My relationship with this gentleman has been outstanding.”

Trump also said they are working on a measure to repeal and replace ObamaCare by early next year.

“We have the same agenda. … We talk all of the time,” said McConnell, who said their meeting also included discussions about judicial appointments and additional hurricane relief funding. "We are together totally on this agenda to move America forward."

McConnell’s office earlier this week portrayed the White House meeting as a pro forma discussion about Republicans’ legislative agenda through the fall, which would include big-ticket items like tax reform, immigration and perhaps revisiting health care reform.

However, the meeting was also the first real face-to-face the leaders have had since their public rift over the summer, after the Republican-controlled Senate failed give Trump his first major legislative victory by repealing and replacing ObamaCare.

Trump in August said he was “very disappointed in Mitch,” after McConnell, R-Ky., said the president had “excessive expectations” about the legislative process.

A McConnell spokesman told Fox News on Sunday that the senator’s meeting with Trump also would include discussions on completing a budget resolution, confirming qualified judicial and other nominees and considering hurricane relief funding.

Trump and McConnell spent a considerable amount of time during their roughly 30-minute press conference talking about such judicial nominations.

McConnell called Trump getting Justice Neil Gorsuch on the high court "the single most important thing the president has done."

Trump argued Senate Democratic leader Chuck Schumer "and his group" are holding up "every single nomination," which he called "beyond comprehension."

Trump also hinted at presenting an economic development plan in the near future, in a wide-ranging press conference in which he also said NFL players should be suspended for sitting during the national anthem. And he taunted 2016 presidential rival Hillary Clinton on the possibility of a rematch, saying "please run again."

The meeting came as conservative groups and former Trump chief political strategist Steve Bannon are pressuring McConnell and other congressional Republicans to relinquish their leadership posts.

"This is our war," Bannon said Saturday at a gathering of religious conservatives,” "The establishment started it. ... You all are going to finish it."

Ken Cuccinelli, a former Virginia attorney general who now leads the Senate Conservatives Fund, said Wednesday on Capitol Hill, said: “We call on all five members of the GOP Senate leadership to step down, or for their caucus to remove them as soon as possible.”

Meanwhile, Senate Republicans appear to be rallying around McConnell.

“Mitch McConnell’s not our problem,” Sen. Lindsey Graham, R-S.C., said Sunday. “Our problem is that we promised to repeal and replace ObamaCare, and we failed. We promised to cut taxes and we have yet to do it.”

GOP Sen. Susan Collins, a moderate from Maine who was a critical “no” vote on health care, said Americans are tired of Bannon-like rhetoric.

"They don't want this hyper-partisanship,” she said. Mitch McConnell is the Senate majority leader. "The president needs him. I'm glad they're working together on tax reform and a lot of other issues. And I'm glad they're meeting this week."

McConnell responded to Trump’s Twitter barrage by saying the challenges of governing shouldn’t be a surprise.

"A lot of people look at all that and find it frustrating, messy. Well, welcome to the democratic process,” McConnell said at a GOP event in Kentucky this summer. “That's the way it is in our country."

Fox News' Mike Emanuel and Joseph Weber and The Associated Press contributed to this report.