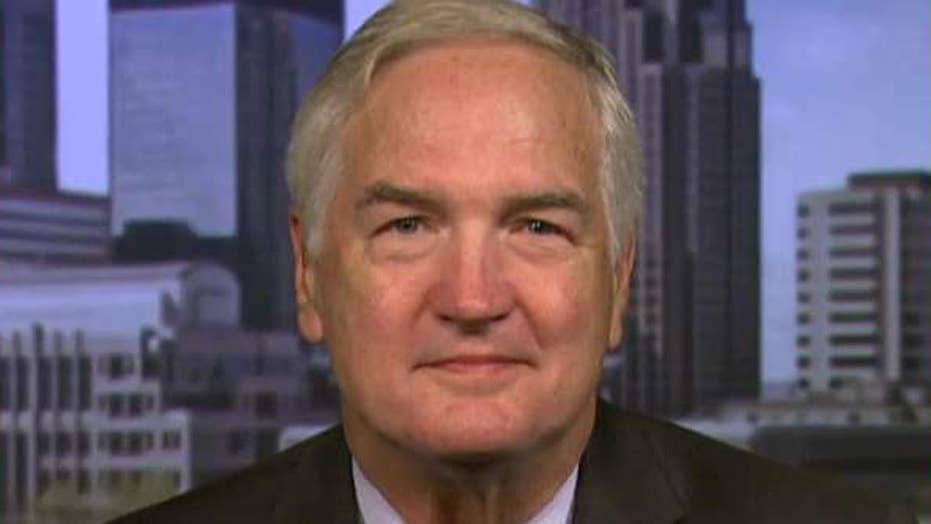 President Trump is fighting to push his candidate over the top as Alabama voters go to the polls Tuesday in the state's special election primaries for U.S. Senate.

Trump on Tuesday morning made a final pitch for Strange, tweeting that the former Alabama attorney general is already “doing a great job for the people of Alabama” and is “tough on crime, borders etc.”

Earlier this week, Trump recorded a one-minute “robocall” for the incumbent.

“Hi, this is President Trump, and I love the people of Alabama. And I hope you go out and vote for Luther Strange,” Trump says in the call, touting such early successes as low unemployment and conservative Justice Neil Gorsuch’s appointment to the Supreme Court. “We are doing a lot of things that people said were impossible, but I need Luther to help us out.”

Trump's endorsement has rattled some conservative media pundits considering Strange is seen as the establishment pick.

However, the president, who remains popular in the state, needs Strange's votes on upcoming tax reform legislation and in his continuing efforts to repeal and replace ObamaCare.

“I couldn’t believe we couldn’t get that done because of a few senators who didn't fulfill their promise,” Strange said Tuesday about the GOP-controlled Senate’s failed ObamaCare repeal votes this summer.

Senate Majority Leader Mitch McConnell also backs Strange over the more conservative Brooks for much the same reasons. And a super PAC tied to the Kentucky Republican has spent millions of dollars in advertising to try to clear the way for Strange.

Yet Strange is far from a lock.

The RealClearPolitics.com polling average shows Moore, who has a strong following among evangelical voters, with 32 percent of the vote. He is followed by Strange with 28 percent and Brooks at 17 percent.

If none of the candidates gets at least 50 percent of the vote, the top-two finishers go to a runoff next month.

The winner will face the Democratic nominee in December. However, Alabama hasn’t elected a Democrat for Senate in more than 20 years.

Brooks on Monday continued to hammer at Strange's support from McConnell and said voters should send a message that "our Alabama Senate seat cannot be bought by special interests in Washington D.C."

"Alabama has a chance to send a message, a huge message -- not only to Washington D.C. -- but the United States of America. We can send a message that we are tired of this do-nothing Senate," Brooks said.

Moore is considered a strong contender in the race because of the fame he has gained as an icon of the culture wars. He was twice removed from his duties as chief justice over stances he took for the public display of the Ten Commandments and against gay marriage.

Other Republicans in the race include Sen. Trip Pittman and Christian Coalition leader Randy Brinson.

The rollicking primary began with Strange's appointment by then-Gov. Robert Bentley, who later resigned in the cloud of a scandal.

While Strange has said he did Bentley no favors, his challengers have taken repeated swipes at him for seeking an appointment from the governor when Strange, as attorney general, was in charge of an investigation.

The Democratic side is also crowded.

Doug Jones, a former U.S. attorney under the Clinton administration, is perhaps the best-known Democrat and is backed by some national party figures such as former Vice President Joe Biden.

Other candidates include Michael Hansen, the head of an environmental organization who has urged Democrats to fully embrace progressive stances. Robert Kennedy, Jr., a Navy veteran who is unrelated to the famed Massachusetts political dynasty, has urged Democrats to build bridges with Republicans and independents.