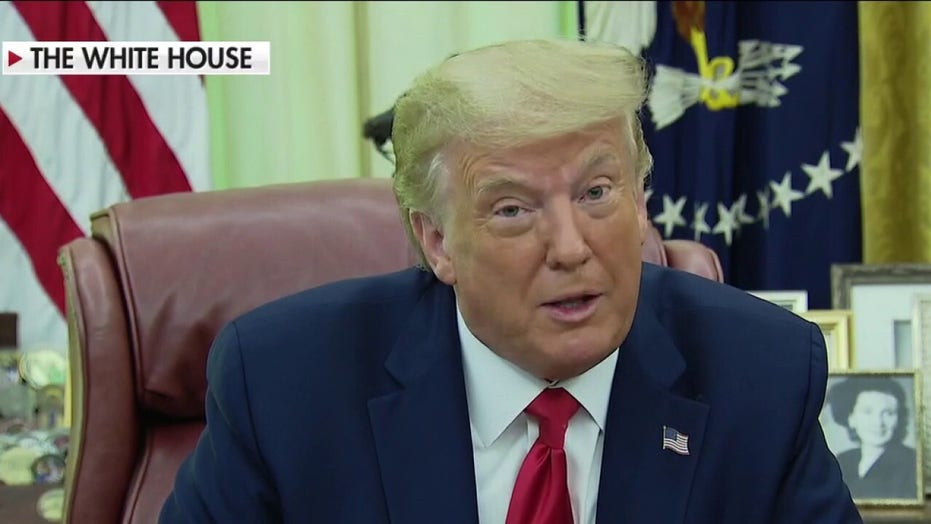 Trump takes aim at Democrat run cities: 'Out of control, like war zones'

The president’s comments came during a briefing from the Justice Department on the progress of law enforcement agencies' efforts to “dismantle, defeat and destroy” MS-13 in the United States.

When asked what could be announced, the president said he would share “in great detail” next week, but said it is “something that I think, at this point, the American people want to see.”

“They’ve been run very poorly,” Trump said, listing Seattle and Minneapolis. “We had the National Guard go in and as soon as they did that, we straightened that mess out. They should have been able to do locally with their police. The police are good. They were told not to do anything.”

The president added: “We have other cities that are out of control.”

“They are like war zones,” he said. “And if the cities are not going to straighten out, or local politicians … they’re all Democrats.”

“They’re all liberal, left-wing Democrats,” Trump said. “And it’s almost like they think it is going to be this way forever.”

Trump went on to note that in Chicago last week, “68 people were shot and 18 people died.”

CHICAGO MOM WHOSE 7-MONTH-OLD WAS GRAZED BY BULLET HAS MESSAGE FOR SHOOTERS: 'TURN YOURSELF IN' OR STOP VIOLENCE

“We’re not going to put up with it,” Trump said.

The president’s comments come amid unrest in cities across the nation, as protesters have taken to the street pushing the “Defund the Police” movement, in the wake of the death of Minneapolis man George Floyd while in police custody in May.

Meanwhile, the president slammed “radical left-wing politicians” who he said, “have fought for open borders and welfare for illegal aliens.”

“My administration has fought for safe streets,” Trump said. “We want security for our people. We want the rule of law. We want law and order.”

The creation of the task force came after the president, in February 2017, signed an executive order to direct a “whole-of-government” approach to dismantle transnational criminal organizations and “restore safety in American communities.” By October 2017, the DOJ designated MS-13 as a priority for its Organized Drug Enforcement Task Forces.