Is Trump right to take a hard line on migrant caravan?

President Trump threatens retaliatory action if the Mexican government fails to halt the migrant caravan from Central America before it reaches the U.S.

President Trump tweeted Saturday that if Democrats stopped being obstructionists “we could write up and agree to new immigration laws in less than one hour.”

“Look at the needless pain and suffering that they are causing.” Trump tweeted. “Look at the horrors taking place on the Border.”

“The president is desperate to change the subject from health care to immigration because he knows that health care is the number one issue Americans care about and that Mitch McConnell, Paul Ryan, and Republicans in Washington are making a mess of our health care system, causing premiums to increase and care to decrease while threatening to gut protections for pre-existing conditions,” Schumer and Pelosi said in response. “Democrats are focused like a laser on health care and will not be diverted.”

Trump's tweet comes as he has seized on a huge caravan of Central American migrants trying to reach the United States through Mexico as fresh evidence that his tough immigration prescriptions are needed. 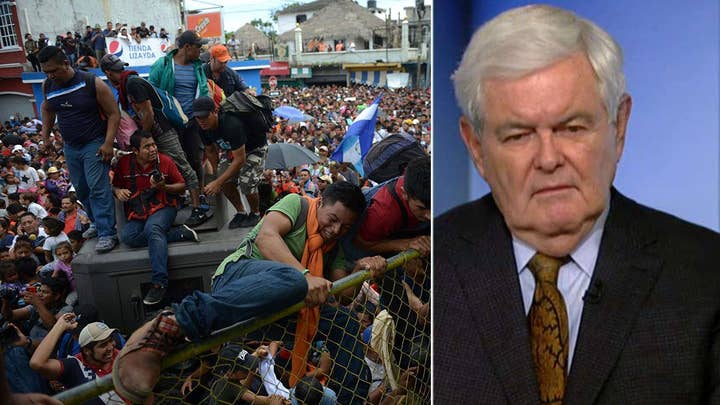 Central American migrants participating in a caravan heading toward the United States woke up Saturday on a bridge that divides the borders of Guatemala and Mexico.

On Friday participants smashed through a border fence enabling a few to dash into Mexican territory. Most were repelled by police with riot shields and pepper spray.

Trump is hoping to turn the immigration issue to Republican advantage with the midterm elections less than three weeks away.

He held a rally Friday in Scottsdale, Arizona, where he told reporters that immigration was "a great issue for the Republicans."

US, MEXICO AGREE ON PLAN TO HANDLE MIGRANT CARAVAN FROM CENTRAL AMERICA 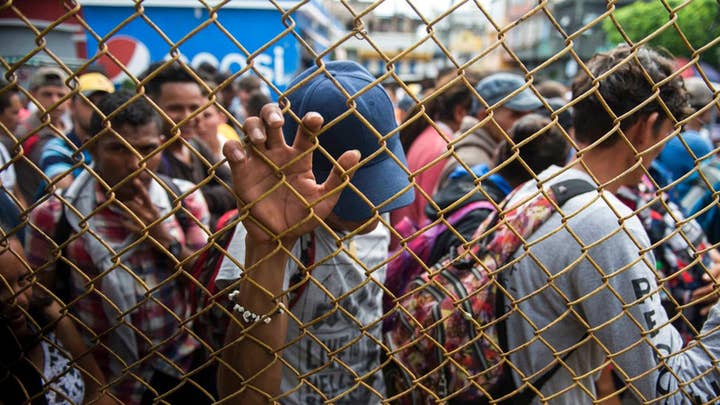 On an aggressive campaign blitz, Trump has sought to cast the midterms as a referendum on his presidency, believing that he must insert himself into the national conversation in order to bring Republicans out to vote. Perhaps no issue was more identified with his last campaign than immigration, particularly his much-vaunted — and still-unfulfilled — promise to quickly build a U.S.-Mexico border wall. To Trump, his pledges are still rallying cries.

"I think it's a big contrast point. All the Democrats are refusing to build the wall. It's a good contrast," said former Trump campaign aide Barry Bennett, who said the caravan was "perfectly timed" for Trump's midterm pitch.

But some warn that as Trump seeks to pump up his base, he could energize opposition. Matt Barreto, co-founder of the research firm Latino Decision, said an elevated immigration message could hurt Trump, too.

"I think you run the risk of angering minority voters across the board, Latino, black and Asian-Americans and also alienating and distancing from whites, including conservatives and moderates, now that they see what's happening with the family separations," said Barreto, a professor at the University of California, Los Angeles.