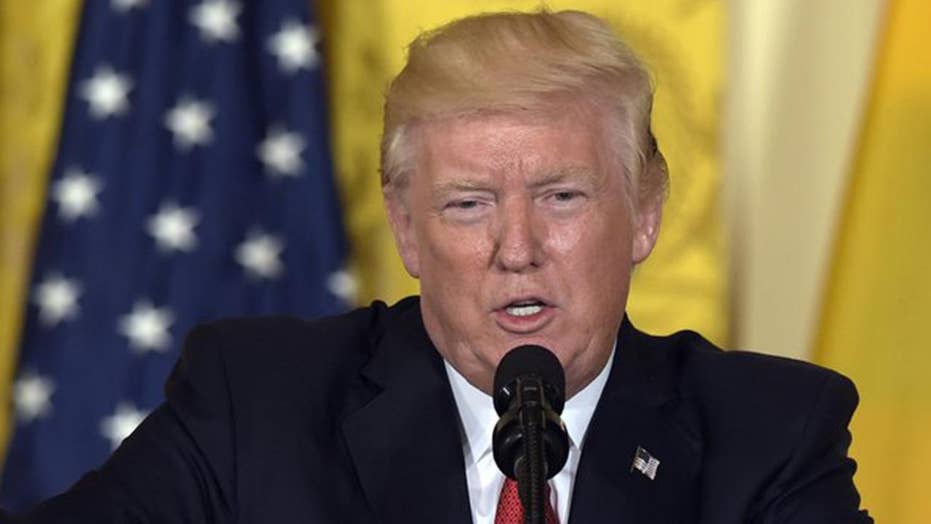 Trump cracks down on institutions that deal with NKorea

Reaction and analysis on 'The Five' after president signs executive order

He started with a shot at Paul, the only Republican who so far has come out strongly against the latest ObamaCare overhaul bill.

“Rand Paul, or whoever votes against Hcare Bill, will forever  (future political campaigns) be known as ‘the Republican who saved ObamaCare,’” Trump tweeted.

Senate Majority Leader Mitch McConnell, R-Ky., intends to bring the bill to the floor for a vote next week.

The president pivoted to another big focus of his administration – North Korea.

“Kim Jong Un of North Korea, who is obviously a madman who doesn’t mind starving or killing his people, will be tested like never before!” Trump tweeted.

Trump earlier this week delivered a rhetorical broadside against North Korea in his speech before the U.N. General Assembly. But the threats from Pyongyang continue. Late Thursday, South Korean media reported that North Korea’s foreign minister said the Communist nation may test a hydrogen bomb in the Pacific Ocean after dictator Kim Jong Un vowed he would take the “highest-level” action against the United States.

Such a test would be considered a major provocation by the U.S., South Korea and Japan.

Earlier this week, Kim Jong Un slammed Trump, calling him “unfit to hold the prerogative of supreme command of a country,” and described him as “a rogue and a gangster fond of playing with fire,” in response to the president’s strong words in his address to UNGA on Tuesday, where he called Kim “Rocket Man.”

But the president didn’t stop there on Friday morning.

“The Russia hoax continues, now it’s ads on Facebook. What about the totally biased and dishonest Media coverage in favor of Crooked Hillary?” Trump tweeted, just hours after Facebook CEO Mark Zuckerberg said the social media network would hand over to Congress the political ads purchased by apparent Russian operatives.

Earlier this month, Facebook uncovered approximately $100,000 spread across approximately 3,000 ads in fraudulent ad spending across its platform tied to the 2016 presidential election. The “potentially politically-related ads” were bought from accounts with U.S. IP addresses, but the language was set to Russian, Facebook said.

The president followed his comments, slamming Clinton as a "bad candidate" and accusing the media of "screaming" for her.

"The greatest influence over our election was the Fake News Media 'screaming' for Crooked Hillary Clinton. Next, she was a bad candidate!" Trump tweeted.

While Trump accused the media of promoting Clinton, in her new book "What Happened," Clinton blamed the media -- and many other factors -- for her loss.

Fox News’ Chris Ciaccia and The Associated Press contributed to this report.