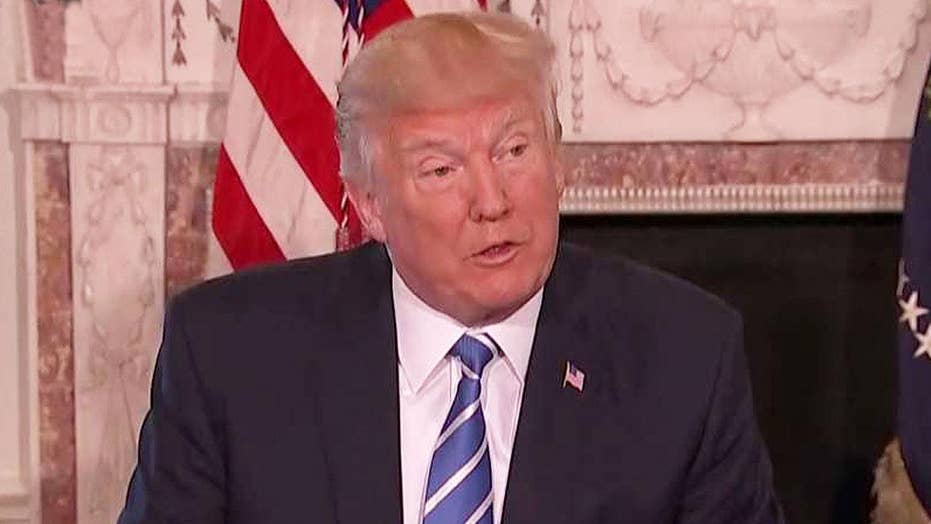 Trump: Kim will truly regret any strike on US or allies

President Trump said Friday that North Korean leader Kim Jong Un will "regret it fast" if he threatens or attacks any U.S. territory or ally, while acknowledging his team is considering military options “very carefully.”

“If he does anything with respect to Guam or any place else that's an American territory or an American ally, he will truly regret it and he will regret it fast,” Trump told reporters Friday afternoon at his New Jersey golf club.

The warning was the latest escalation in what has become a war of words between the two countries. Trump has spent the week turning up the heat on North Korea, specifically warning the regime of real consequences if it carries out an attack on Guam, the U.S. territory the country has threatened.

“This man will not get away with what he’s doing, believe me,” Trump said of Kim.

"Hopefully it will all work out,” he said. “Nobody loves a peaceful solution better than President Trump, that I can tell you.”

“We think that lots of good things could happen and we could also have a bad solution,” he said.

Pressed by a reporter if that meant war with North Korea, Trump replied: “I think you know the answer to that.”

Again referencing Pyongyang’s threats of attacking an U.S. territory, the president issued a warning. “If anything happens to Guam, there’s going to be big, big trouble in North Korea."

Earlier Friday, the president warned North Korea on Twitter that the United States’ military was “locked and loaded,” and urged the rogue regime’s dictator to “find another path.”

FROM TRUMP TO CLINTON, HOW US PRESIDENTS HAVE DEALT WITH NORTH KOREA

Asked by a reporter Friday what he meant by military solutions, he said: “We are looking at that very carefully, and I hope that they are going to fully understand the gravity of what I said. And what I said is what I mean.”

Trump added: “Those words are very, very easy to understand.”

The regime has recently made several threats to the United States amid a new United Nations sanctions package that was passed unanimously last week.

North Korea’s state news agency most recently warned “even a single shell dropped on the Korean Peninsula might lead to the outbreak of … thermonuclear war.”

“We consider the U.S. no more than a lump which we can beat to a jelly any time,” the Korean Central News Agency said, quoting Institute of International Studies researcher Kang Kum Chol.