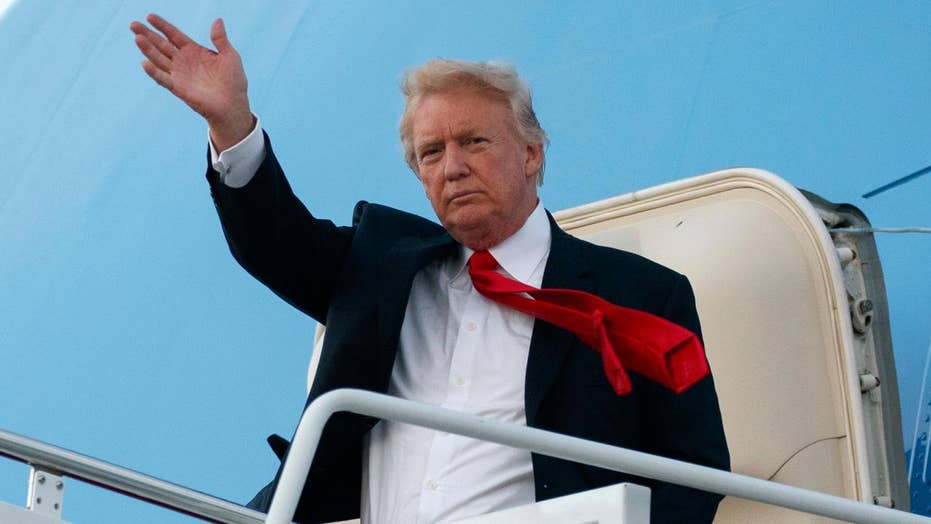 One says 'part of Russia and its government's support for Mr. Trump'; reaction from Josh Kraushaar, politics editor at the National Journal

While congressional Democrats were quick Tuesday to cast Donald Trump Jr.'s newly released emails as evidence of "collusion," a few went so far as to accuse the president's son of treason -- rhetoric the White House is calling "ridiculous."

“If this isn't treasonous, I'm not sure what is,” Democratic Massachusetts Sen. Seth Moulton tweeted Tuesday after Trump Jr. released emails detailing plans for his meeting with a Russian lawyer purported to have dirt on Hillary Clinton.

The president’s son says no such information was exchanged at the time. But the new emails cast the meeting as connected to Russian government efforts to boost then-candidate Donald Trump, leading to harsh accusations from Democrats.

During Tuesday’s press briefing, White House Deputy Press Secretary Sarah Huckabee Sanders was asked about words like “obstruction of justice,” “perjury” and “treason” being used against the Trump team.

“I think those new words are ridiculous,” Sanders said.

The emails in question pertained to the lead-up to a June 9, 2016 meeting with Russian attorney Natalia Veselnitskaya after an acquaintance claimed the contact had damaging information on Clinton.

Asked about the Trump Jr. story on Tuesday, Virginia Sen. Tim Kaine, the 2016 Democratic vice presidential nominee, told a gaggle of reporters on Capitol Hill he believed the investigation into Russia’s attempted interference in the election could extend to treasonous behavior at home.

"We're now beyond obstruction of justice in terms of what's being investigated,” Kaine said. “This is moving into perjury, false statements and even potentially treason."

California Democratic Rep. Eric Swalwell on Tuesday accused Trump Jr. of a willingness to commit betrayal against the United States by accepting the meeting. “Trump Jr. was willing to betray US to cheat for his Dad's campaign,” the Democrat said.

“These emails show there is no longer a question of whether this campaign sought to collude with a hostile foreign power to subvert America’s democracy,” Wyden said.

The invocation of “treason” by Democrats was mocked online, including by some on the left. “Running around screaming TREASON day after day is definitely conducive to a healthy, rational, and constructive political environment,” journalist Michael Tracey of the liberal The Young Turks tweeted.

Trump Jr. said in a statement Tuesday he released the emails in the interest of transparency.

He has downplayed the significance of the meeting all along and said in his latest statement that he presumed the information the contact had was "Political Opposition Research."

"I first wanted to just have a phone call but when they didn’t work out, they said the woman would be in New York and asked if I would meet. I decided to take the meeting," he explained.

Trump Jr. also said the woman "was not a government official" and "had no information to provide."

He added, "To put this in context, this occurred before the current Russian fever was in vogue."