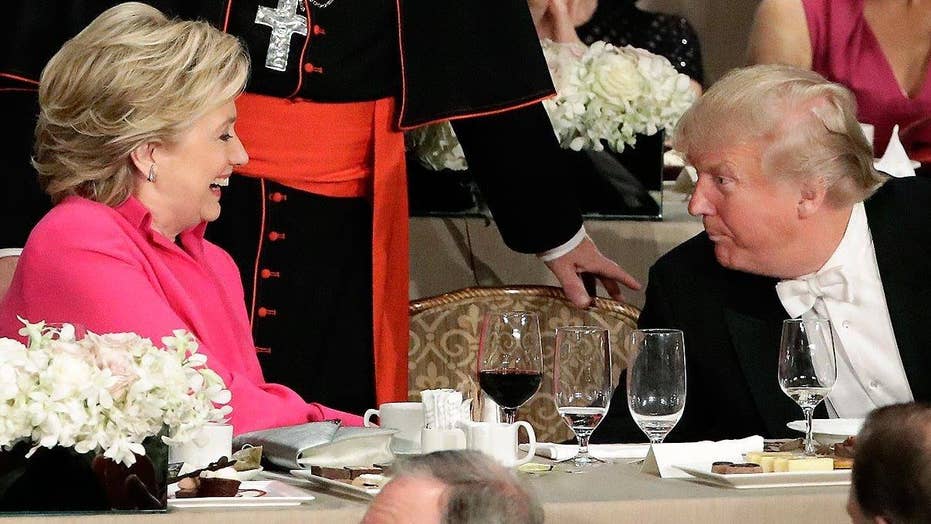 Republican nominee Donald Trump was jeered by attendees at a New York white-tie charity dinner Thursday night after his speech crossed from roast-style jokes into attacks on Hillary Clinton -- though the Democratic nominee also took swipes, and both candidates got roasted by the master of ceremonies.

The first outburst from members of the audience at the annual Alfred E. Smith Memorial Foundation Dinner came when Trump said that Clinton was "so corrupt she got kicked off the Watergate Commission."

The jeers continued when Trump referenced the Clinton campaign emails leaked by Wikileaks and claimed that the former secretary of state was "pretending not to hate Catholics," an apparent reference to 2011 emails from a current Clinton campaign spokeswoman that mocked Catholics and evangelical Christians.

CLINTON: IT TOOK A VILLAGE TO WRITE THESE JOKES

Some members of the audience appeared to be shouting at Timothy Cardinal Dolan, who was sitting between the candidates, and asking him to take the microphone from Trump, who quickly pivoted to remembrances of attending the event with his father.

Moments earlier, Trump had gotten one of the biggest cheers of the night when he joked about his wife Melania's speech at the Republican National Convention, which was found to have been partially plagiarized from an address by first lady Michelle Obama.

"Michelle Obama gives a speech and everyone loves it," Trump said. "My wife Melania gives the exact same speech and people get on her case and I don't get it. I don't know why."

As Melania Trump rose to acknowledge the applause, her husband remarked, "I'm in trouble when I go home tonight. She didn't know about that one."

Clinton also was the first one to laugh when Trump joked that she had bumped into him earlier in the night "and she very simply said `Pardon me"' -- an unsubtle reference to the Republican nominee's frequent declarations that his opponent should go to jail.

Clinton, meanwhile, joked that she had taken a break from her "usual nap schedule" to attend and suggested that the audience should be pleased she's not charging her usual fee for speaking in front of potential donors.

But she also got in some digs at Trump, a few of which drew scattered jeers. Clinton said she understood why Trump was leery of teleprompters because they can be difficult to follow and "I'm sure it's even harder when you're translating from the original Russian."

Clinton repeatedly referenced Trump's most controversial moments from the three presidential debates. She joked that if Trump didn't like what she was saying, then he could shout 'wrong."'

She added that she was surprised Trump let her go second because "I didn't think he'd be OK with a peaceful transition of power." And she said Trump "looks at the Statue of Liberty and sees a four. Maybe a `5' if she loses the torch and tablet and changes her hair."

She even took a shot at Trump's running mate, saying that "after listening to your speech, I will also look forward to listening to Mike Pence deny that you ever said it."

The candidates did not greet each other or make eye contact when they entered and took their seats for the event at the Waldorf-Astoria Hotel, though they did shake hands at the conclusion of the roast.

For his part, Dolan called his seat "the iciest place on the planet," though he later said that he was "very moved" by the candidates' interaction on the dais.

"They were very friendly, very uplifting, very complimentary to one another," he told Fox News outside the event. "The fact that we are together, the fact that they shook hands at the end and said, 'See ya on the campaign trail,' that's not bad."

Clinton and Trump both took some early heat from the night's master of ceremonies, Alfred E. Smith IV, the event namesake's great-grandson. Smith joked that Trump approached Clinton before the event and asked how she was doing, to which Smith responded "I'm fine but now get out of the ladies' dressing room."

Trump laughed at the joke, and again when Smith made another joke about the leaked video which captured Trump using vulgar language, saying while the celebrity businessman was "sitting next to a man in a robe [Cardinal Dolan], but this is not a locker room. Watch your language!"

Smith also teased Clinton, noting that "titans of Wall Street" were in attendance, but told her to restrain herself from seeking donations and to "remember the children."

Fox News' Bryan Llenas and the Associated Press contributed to this report.