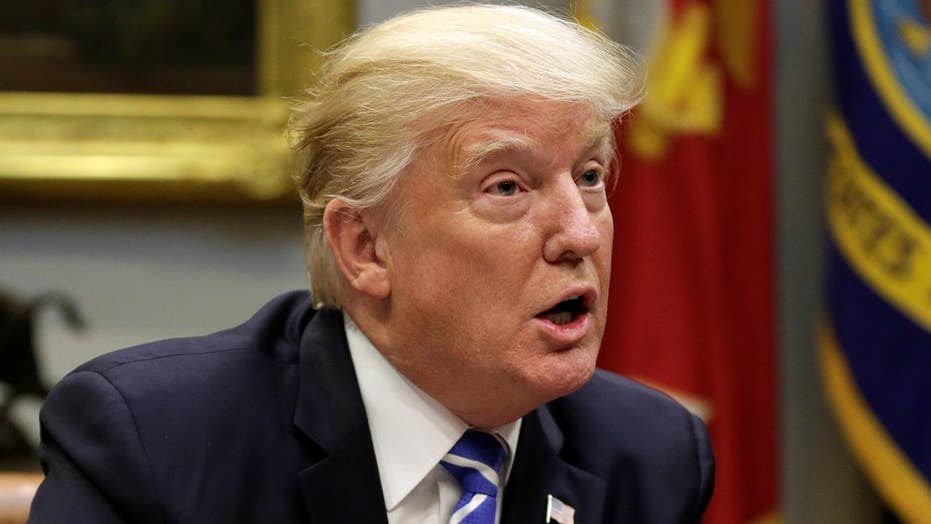 President to meet with 'big four' on Capitol Hill

President Trump has yet to sign legislation that repeals ObamaCare, funds a new wall on the border with Mexico or reforms the country’s tax code.

But gridlock in Congress has not stopped the president from unraveling former President Barack Obama’s executive action legacy during his first eight months in office.

The latest reversal came this week with the president’s announcement to end the Deferred Action for Childhood Arrivals, or DACA, program implemented in 2012.

Obama’s program gave a deportation reprieve to hundreds of thousands of young illegal immigrants, something conservatives have called unconstitutional.

“Only by the reliable enforcement of immigration law can we produce safe communities, a robust middle class, and economic fairness for all Americans,” Trump said Tuesday as he argued Obama didn’t have the authority to enact a policy he referred to as amnesty in the past.

Obama reacted with outrage to Trump’s action on DACA, calling it both “wrong” and “cruel.”

“Ultimately, this is about basic decency,” Obama said.

DACA could yet live on in some form, as Trump has challenged Congress to come up with a replacement. But for now, it marks the latest in a string of reversals for Obama’s executive actions -- something Trump vowed to achieve during the presidential campaign.

"We're going to be unsigning a lot of executive orders, especially his order that basically lets anybody they want just pour into our country," Trump told a crowd during a campaign rally in Virginia in 2015.

In July, Trump surprisingly announced plans to reverse the Obama administration's decision to allow transgender people to serve in the military.

Trump said last month he wants the order implemented by March, though Defense Secretary Jim Mattis said the current policy will remain in place while experts study the issue.

Trump in June announced plans to roll back some of Obama's Cuba policies, ordering the reinstatement of certain U.S. travel restrictions to the country, though he left other Obama policies in place.

Trump also announced in June his decision to withdraw from the Paris climate agreement, the environmental pact Obama joined through an executive order.

“So we’re getting out,” Trump announced in the Rose Garden. “But we will start to negotiate, and we will see if we can make a deal that’s fair. And if we can, that’s great. And if we can’t, that’s fine.”

Trump has used the stroke of his pen to roll back other Obama environmental-related orders.

In March, Trump signed an executive order at EPA headquarters calling for a review of the Clean Power Plan, which restricts greenhouse gas emissions at coal-fired power plants.

In April, Trump ordered Interior Secretary Ryan Zinke to conduct a review of the country’s national monuments, accusing his predecessors of a “massive federal land grab” in an attempt to protect the environment.

Trump, along with GOP lawmakers, have also been able to use the Congressional Review Act, an obscure rule-killing law, to chip away at Obama's legacy, wiping out a wave of last-minute regulations pushed through before Trump took office.

The Congressional Review Act has been used to nix everything from a rule that would have required oil and gas companies to report payments to foreign governments to a gun safety regulation Obama proposed following the massacre at Sandy Hook Elementary School.