President Trump addresses supporters in Illinois following the attack on the Tree of Life synagogue in Pittsburgh.

President Trump had strong words on the subject of religious persecution following Saturday’s deadly shooting in a Pittsburgh synagogue, calling the attack an “assault on humanity.”

Speaking at a campaign rally for Illinois Rep. Mike Bost, Trump initially addressed the shooting inside the Tree of Life Synagogue in Pennsylvania’s predominantly Jewish Squirrel Hill neighborhood. At least 11 people were killed when a gunman entered and opened fire.

“This evil, anti-Semitic attack is an assault on all of us. It is an assault on humanity,” the president said, reiterating remarks he'd made about the episode earlier in the day. “It must be confronted and condemned everywhere it rears its ugly head. We must stand with our Jewish brothers and sisters to defeat anti-Semitism and vanquish the forces of hate.”

Trump also doubled down on earlier calls to invoke the death penalty.

“We must draw a line in the sand and say very strongly, never again.”

Trump said he'd weighed the idea of canceling the rally and an earlier event in Indiana in light of the “horrible” shooting. 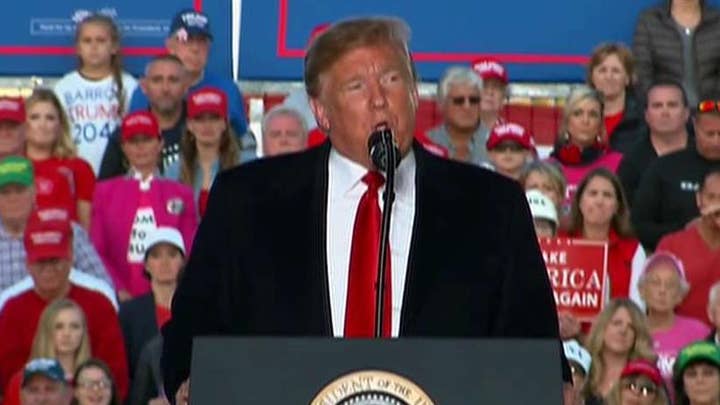 “We can’t allow people like this to become important,” he said.

Just before taking the stage, Trump again shared his condolences for what he called “the mass murder of Jewish Americans.”

“We pray for those who perished and their loved ones, and our hearts go out to the brave police officers who sustained serious injuries...,” his tweet read. Four officers were among the injured.

Trump is on a rally blitz, hoping to bolster Republicans in Nov. 6 midterm elections that will determine which party controls Congress.