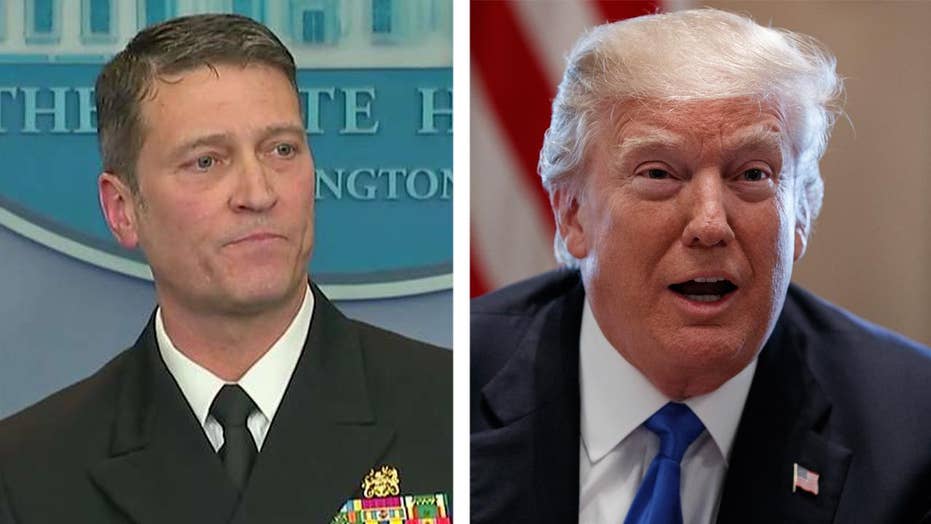 The results of this doctor's appointment was of global interest. The high-profile patient? President Donald J. Trump.

The physical came just one week after Trump slammed Michael Wolff’s White House exposé, “Fire and Fury,” which raised questions about the president’s mental health and fitness to run the Oval Office. The president said he considered the book a “work of fiction,” adding that Wolff’s purported hours-long interviews with him never took place.

“Ran for president one time and won. And then I hear this guy who doesn't know me at all, didn't interview me for three hours, his imagination,” Trump told reporters at Camp David, a day after the book was officially released.

When it comes to his health, Trump has always been quick to defend himself.

“....Actually, throughout my life, my two greatest assets have been mental stability and being, like, really smart,” Trump tweeted on Jan. 6.

During his campaign for president in December 2015, Trump released a letter from his longtime personal physician, Dr. Harold Bornstein, predicting he would be “the healthiest individual ever elected to presidency.”

While Jackson wouldn't "make any comparisons of presidents over the past 200 years," here's what he did say about Trump's first physical as commander-in-chief during a press briefing at the White House Tuesday.

Is Trump required to have an annual physical?

No, the president has no legal obligation to have a physical exam. In fact, the president isn't even required to disclose any of his health information. He can pick and choose what's released to the public. However, Jackson assured the media that he didn't leave anything out.

"I can promise there's absolutely nothing I'm withholding from this," Jackson told reporters. "I've done the last four or five of these...this is more information that's been put forth than any assessment to date."

What did the exam entail?

Results from the physical included information such as height, weight, body mass index, blood pressure and cholesterol levels among other basic data.

The exam lasted for about 4 hours and a team of 12 medical professionals from Walter Reed National Military Medical Center assisted Jackson with the exam.

"It was a team effort," Jackson said.

What we learned from Trump's exam

Medications: Crestor, to lower cholesterol, Propecia, to prevent male pattern hair loss, a cream to treat rosacea and a multivitamin.

Jackson says Trump is in very good health, despite his weight and his usage of cholesterol-lowering medicine.

His vascular health looks good, and Jackson described Trump's cardiac health as "excellent," which he attributes to a history of abstaining from alcohol and tobacco.

Overall, Trump is "very healthy and will remain so for the duration of his presidency," Jackson said.

Trump has set a goal to lose 10 to 15 pounds, Jackson said. Right now, the president doesn't have a set diet or exercise routine, though, Jackson points out, he is receiving more nutritious meals thanks to White House chefs.

"If diet and exercise are right then weight loss will come," said Jackson, adding that he plans to take a more active role in monitoring Trump's nutrition and may even ask first lady Melania Trump for assistance. "He's more enthusiastic about the diet part than exercise part, but we're going to do both."

In response to a question from a reporter about how Trump can remain in "excellent health" despite his rumored McDonald's diet, Jackson replied, "It’s called genetics. Some people just have great genes; he has incredibly good genes. It's just the way God made him."

Jackson also estimated Trump sleeps, on average, about four to five hours a night. He said he hopes to gradually increase that number, but that may just be Trump's routine.

"He’s probably been that way his whole life," Jackson said. "He’s just one of those people that does not require a lot of sleep."

Did Trump undergo a cognitive test?

Yes. Per Trump's request, Jackson performed what he believes to be the first cognitive test during a presidential exam, despite having "absolutely no concerns about his cognitive ability."

The 10-minute test, known as The Montreal Cognitive Assessment (MoCA), assesses a person's concentration, executive functions, memory and conceptual thinking among other "cognitive domains," according to the Boston Medical Center.

Trump performed "exceedingly well" on the exam, with a perfect score -- 30 out of 30, Jackson said.

What we already knew about Trump’s health

Trump’s health has been a hot topic of discussion both before and after he took office. Bornstein released several letters summarizing Trump’s health status during the 2016 presidential race.

In the first report, made public on Trump’s campaign website, Bornstein confirmed Trump is “in excellent physical health.”

The physician described Trump as 6’3”, weighing 236 pounds, adding he had only been hospitalized once at the age of 11 for an appendectomy.

“He takes a lipid lowering agent (rosuvastatin) and a low dose aspirin,” Bornstein wrote in the report. “He does not use tobacco products or alcohol.”

Trump sat down to discuss the medical records on the "Dr. Oz Show," saying he has a tremendous amount of stamina.

"I would say just based on my life...I feel as good today as I did when I was thirty," Trump told Dr. Mehmet Oz in the Sept. 2016 interview.

“He has all his hair,” Bornstein, who has been Trump’s personal physician since the 1980s, told The Times.

Bornstein also said Trump takes an antibiotic to control rosacea, a common skin condition that causes redness and dilated blood vessels, and a statin for elevated blood cholesterol and lipids.