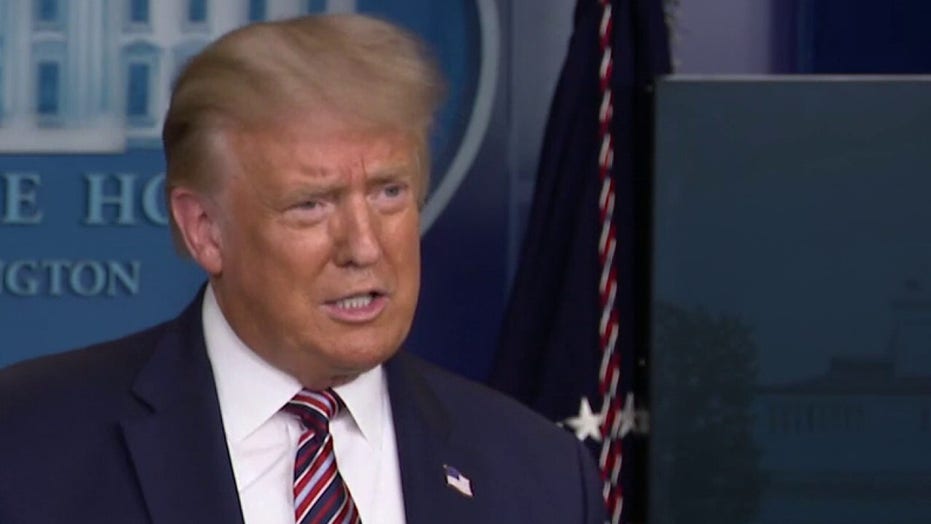 President Trump weighed in on Joe Biden’s running mate pick Wednesday, saying there was “nobody more insulting to Biden than she was" during the Democratic primary.

“She left angry, she left mad,” Trump said during an afternoon press conference.

Sen. Kamala Harris, D-Calif., made her mark on the presidential race in a moment where she called out Biden for touting his work with segregationist senators and his opposition to busing. Harris, as an Indian and Black woman, took Biden’s opposition personally: "There was a little girl in California who was part of the second class to integrate her public schools and she was bused to school every day. That little girl was me," Harris said.

BIDEN, HARRIS APPEAR TOGETHER FOR FIRST TIME SINCE VP ANNOUNCEMENT: 'AMERICA IS CRYING OUT FOR LEADERSHIP'

Trump added that there was a “situation” where Harris “believed the women” who accused Biden of inappropriate contact.

After a number of women in April 2019 accused the presumptive Democratic nominee of inappropriate touching and kissing, Harris said: “I believe them, and I respect them being able to tell their story and having the courage to do it.”

“He’s going to have to make that decision for himself,” Harris said when asked if Biden, who hadn’t announced a presidential bid at the point, should still run. “I wouldn’t tell him what to do.”

Biden released a video addressing the allegations at the time, in which he said, “Social norms are changing. I understand that, and I’ve heard what these women are saying. Politics to me has always been about making connections, but I will be more mindful about respecting personal space in the future. That’s my responsibility and I will meet it.”

TRUMP SLAMS HARRIS AFTER VP PICK, CLAIMS 'SHE WAS MY NUMBER ONE PICK'

“Now all of a sudden she’s running to be vice president,” the president continued on Harris. “I was surprised he picked her because of the horrible way she talked about him, and frankly because of way she dropped like a rock,” in the Democratic primary, he added. “Generally speaking you don’t want to pick somebody that went down.”

Trump said that Harris said “far worse thing about Biden than I ever did.” He said he’d read Wednesday that she’s “very short on facts,” and assured that Vice President Mike Pence would do “even better against her than he did against Sen. [Tim] Kaine.”

On policy, Trump said want to “partially defund” law enforcement and ban fracking, a position he said would be unpopular in states like Pennsylvania.

Just before the president’s news conference Biden and Harris appeared together for the first time since Biden announced the California senator as his running mate Tuesday.

In that appearance Harris hit the White House’s current occupant for “making every challenge we face even more difficult to solve."

"America is crying out for leadership, yet we have a president who cares more about himself than the people who elected him," she said. "A president who is making every challenge we face even more difficult to solve."

“The case against Donald Trump and Mike Pence is open and shut," Harris continued.