President Trump in a video posted to Twitter on Tuesday night demanded that lawmakers amend the coronavirus stimulus package they passed Monday to include $2,000 checks for individuals instead of $600 checks -- while also insisting that "wasteful and unnecessary" items be cut from the year-end spending package that was attached to the pandemic aid.

The president, meanwhile, doubled down on his baseless claims that he won the presidential election in a "magnificent landslide" and attacked the two most powerful Republicans in the U.S. Senate because they've acknowledged that President-elect Biden won the election.

Trump's broadsides against his own party, unproven election claims and 11th-hour stimulus demands after essentially being absent through the entire negotiating process continued his pattern of sowing chaos in the waning days of his presidency as he's failed to publicly accept that he will be leaving the White House in less than a month.

"I am asking Congress to amend this bill and increase the ridiculously low $600 to $2,000, or $4,000 for a couple," Trump said in his Twitter video. "I'm also asking Congress to immediately get rid of the wasteful and unnecessary items from this legislation, and to send me a suitable bill or else the next administration will have to deliver a package, and maybe that administration will be me." 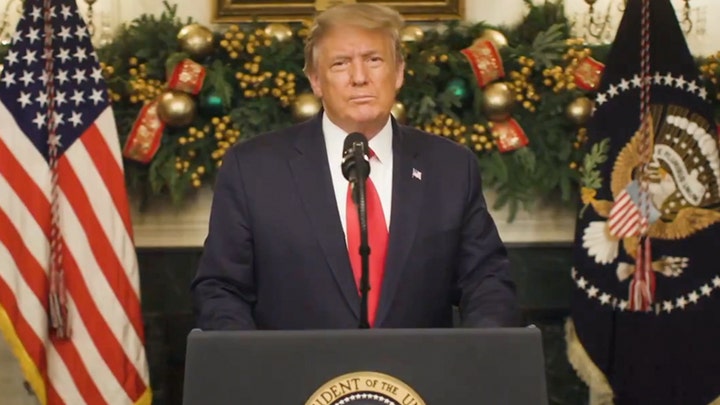 The year-end funding package, often referred to as an omnibus, was combined with the coronavirus stimulus bill as Congress raced to get out of Washington, D.C., for Christmas. The funding package was previously negotiated in Congress, while lawmakers finally came to an agreement on the coronavirus aid over the weekend. Both would have had to pass anyway, but combining them allowed it to be done in one vote.

Some lawmakers had voiced process objections over the fact the two were combined and derisively termed the monstrous legislation the "coronabus." Rep. Chip Roy, R-Texas, said it "should have been divided into well over 20 bills."

But Trump appeared to confuse the spending package that funds the government and the coronavirus stimulus.

"A few months ago, Congress started negotiations on a new package to get urgently needed help to the American people. It's taken forever," Trump said. "However, the bill they are now planning to send back to my desk is much different than anticipated. It really is a disgrace."

Trump added: "For example, among the more than 5,000 pages in this bill, which nobody in Congress has read because of its length and complexity -- it's called the COVID relief bill, but it has almost nothing to do with COVID."

It's unclear at this point what Congress will do about Trump's demands. Trump did not issue a direct veto threat in his Tuesday video and still could sign the bill if lawmakers and their staffs don't come back -- although it is not clear if they will or not, according to congressional sources.

Trump also has the potential, if he simply refuses to sign the "coronabus" and Congress doesn't send him anything more, to "pocket veto" the legislation. That would force Congress to essentially start the legislative process all over. It would put the government at risk of a shutdown yet again, as it is currently operating on a seven-day interim spending bill.

Democrats, meanwhile, immediately seized on Trump's check demand to attack Republicans and demand that the direct stimulus be increased to $2,000 per individual. The House plans on Thursday to try to amend the bill via unanimous consent.

"Republicans repeatedly refused to say what amount the President wanted for direct checks," House Speaker Nancy Pelosi, D-Calif., tweeted. "At last, the President has agreed to $2,000 — Democrats are ready to bring this to the Floor this week by unanimous consent. Let’s do it!"

"I’m in. Whaddya say, Mitch?" Senate Minority Leader Chuck Schumer, D-N.Y., tweeted. "Let’s not get bogged down with ideological offsets and unrelated items and just DO THIS! The American people deserve it."

And the pressure on Republicans is not just from a legislative angle in Congress. Trump handed the Democratic Senate candidates in Georgia a cudgel with which to hammer their incumbent Republican opponents.

"Last night Kelly Loeffler and I left Georgia late, got up there just before midnight, we voted on this next round of COVID relief and I'm so proud to be able to bring that relief back to Georgia," Sen. David Perdue, R-Ga., said in a video posted Tuesday, hours before Trump slammed lawmakers for sending the package to his desk.

Ammar Moussa, a spokesman for Jon Ossoff, who is the Democrat challenging Perdue, shared Trump's video with his followers.

"David Perdue is already running ads touting a COVID relief bill he had nothing to do with," Moussa said. "Here’s Donald Trump ripping it apart."

"President Trump is as ever, erratic and all over the place, but on this point, he's right. $600 is a joke," Ossoff himself added. "And David Perdue, my opponent, who opposed even the first round of $1,200 checks – imagine that... And now decided he wanted to cut it down to $600 bucks when people can barely feed their families through no fault of their own."

Many Republicans were already worried that Trump's election fraud claims could depress GOP turnout for Loeffler and Perdue, although Trump has vocally backed the two senators and even traveled to Georgia to campaign for them. The campaigns for Perdue and Sen. Kelly Loeffler, R-Ga., did not respond to requests for comment on the Trump video. The Georgia Senate races will decide which party controls the body for the next two years and to what extent Republicans can thwart Biden's agenda.

In a separate video Tuesday, Trump continued his false claims that "we won the election by a landslide, we won it big." He repeated a number of claims that have been pushed by fringe allies of his, including lawyers Sidney Powell and Lin Wood, whose election-related lawsuits have been uniformly rejected by the courts.

WHY HOUSE SPLIT THE CORONAVIRUS AND OMNIBUS PACKAGE INTO TWO VOTES, AND WHAT IT MAY MEAN FOR NEXT CONGRESS

Trump's allegations of voter fraud have been putting Republicans in a tight spot, forcing them to choose between supporting the president's unsubstantiated claims or risking his Twitter ire.

And no Republicans are immune from it. In the past week, Trump has lambasted the top two Republicans in the Senate for accepting the result of the presidential election -- that Biden won.

After McConnell congratulated Biden on his victory, Trump last week said in a tweet that McConnell "and Republican Senators have to get tougher."

Senate Minority Whip John Thune, R-S.D., meanwhile, previously said that "it's time for everybody to move on" from the election challenges and to accept Biden's victory. Asked Monday about the prospects for success of a challenge in Congress to Biden's Electoral College victory, which Trump has endorsed, Thune said it will be "going down like a shot dog."

That led Trump to declare that Thune's time in the Senate is limited.

"Republicans in the Senate so quickly forget. Right now they would be down 8 seats without my backing them in the last Election. RINO John Thune, 'Mitch’s boy', should just let it play out," Trump said in a tweet Tuesday. "South Dakota doesn’t like weakness. He will be primaried in 2022, political career over!!!"

Thune's office has not publicly responded to the Trump tweet.

Trump will leave office on Jan. 20 when Biden is inaugurated, at least somewhat easing the pressure on the GOP to back his erratic behavior. But he has already hinted that he would run for president in 2024, which could freeze the field of presidential candidates and force Republicans to continue to be accountable to Trump or else risk losing his base.

Fox News reported Tuesday that Bill Stepien, Trump's reelection campaign manager, and other top Trump campaign members are setting up a political consulting firm that will likely work with Trump as he continues to wield his influence over the GOP even after he leaves office.