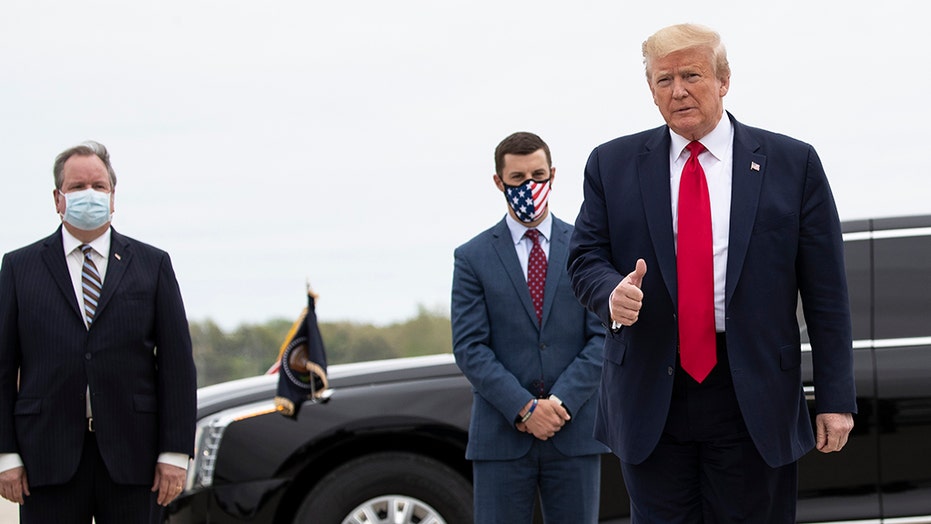 President Trump will travel to Florida for the historic SpaceX launch next week, the White House said Friday.

SpaceX’s Falcon 9 rocket and Crew Dragon spacecraft are being prepared for a historic Demo-2 mission on Wednesday, which will launch NASA astronauts into space from U.S. soil for the first time since 2011.

It will be the first time a private company, rather than the national government, sends astronauts into orbit. It will also be only the fifth time in U.S. history that NASA astronauts will fly a new spacecraft for the first time.

“A new era of human spaceflight is set to begin,” NASA said in a statement.

The SpaceX Falcon 9 rocket with the company's Crew Dragon spacecraft onboard is seen as it is raised into a vertical position on the launch pad at Launch Complex 39A. (NASA/Bill Ingalls)

Vice President Pence said this week he thinks the launch will serve as a sign of hope for Americans in the midst of the coronavirus pandemic.

"When that rocket goes off next week, it'll remind the American people that even in the midst of the most challenging times, America still moves forward," the vice president told Fox News during an interview at NASA's headquarters in Washington, D.C.

"America continues to lead with courage and with bravery. Just like every American family has done, the NASA family did that throughout the coronavirus pandemic. They stayed on mission."

The Demo-2 mission is scheduled for May 27 at the Kennedy Space Center, when NASA astronauts Doug Hurley and Bob Behnken will launch on the Falcon 9 rocket.

It will signify a step in the Trump administration’s goal to reestablish American dominance in space. In December 2019, Trump signed a defense spending bill authorizing the creation of the Space Force as the sixth branch of the U.S. military.

The Space Force recently released a recruitment video, telling potential cadets:  "Maybe your purpose on this planet isn't on this planet."