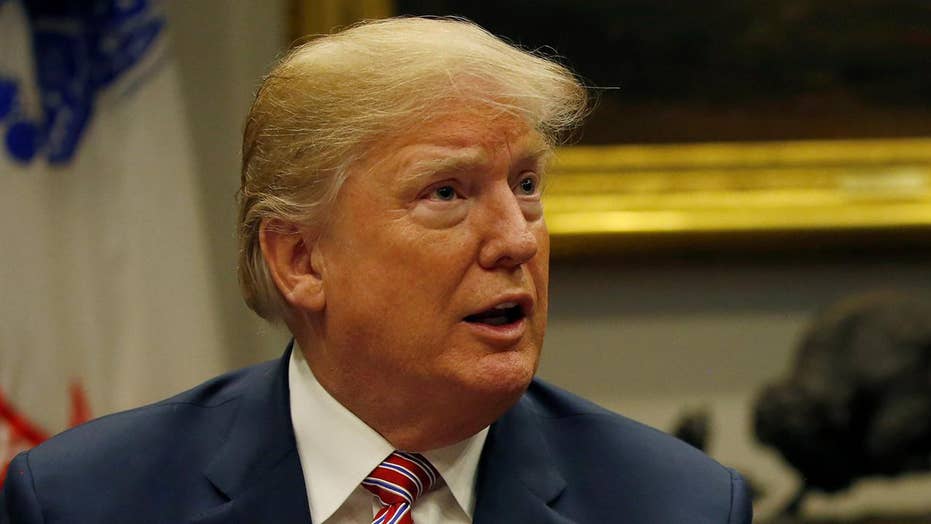 President Trump: We need to get smart about gun-free zones

President Trump meets with state and local officers about school safety, says we need to harden our sites as no one would attack a school if they know teachers have concealed weapons.

President Trump on Thursday floated the possibility of paying teachers a “bonus” to carry concealed firearms, stressing the importance of school security even as he calls for strengthening gun laws in the wake of the Parkland mass shooting.

The president, earlier in the day, had tweeted that arming “20% of teachers” would help stop a “savage sicko” trying to open fire at a school. He elaborated on the idea Thursday afternoon during a White House listening session focused on school safety with local officials.

He said only those with "aptitude" should be carrying weapons, and pitched an incentive program.

He again said that if 20 percent of teachers had guns, "you won't have these shootings, because these people are cowards."

Calls to arm educators as a matter of policy are very controversial. One top teachers union official called it "one of the worst ideas" she's heard.

The president, though, has floated a range of options for preventing mass shootings, including raising the age for purchasing any firearm to 21.

The NRA, however, said their position on the issue has not changed and the organization remains opposed to such a change.

“We don’t expect to agree with the NRA on every single issue…We believe they will do what is right,” Deputy White House Press Secretary Raj Shah said.

At the beginning of Thursday's meeting, Trump said, “There’s a tremendous feeling that we want to get something done.”

A concealed-carry policy for teachers and school officials was initially raised during Wednesday’s separate White House listening session by a parent of a Marjory Stoneman Douglas student—an idea the president said his administration would look at “very strongly.”

According to the National Center for Education Statistics, there were 3.6 million elementary and secondary school full-time teachers in 2015. If the president armed 20 percent of them, that would be more than 700,000 educators.

During the White House press briefing, Shah was pressed as to where the money for a “bonus” for more than 700,000 teachers would come from, with some reporters suggesting the bill could be hundreds of millions of dollars.

“The policy hasn’t been fleshed out, but do we really think that’s too much to pay for school safety?” Shah said.