President Trump will meet Saturday with evangelical faith leaders, hours before he is expected to announce that he is nominating Amy Coney Barrett for the Supreme Court.

Trump’s schedule has him meeting with the group less than two hours before he will announce his pick to fill the seat left vacant by the death of Ruth Bader Ginsburg last week.

Multiple sources have told Fox News that Trump has settled on Barrett and is expected to announce her nomination at 5 p.m ET.

Barrett’s religious faith is expected to be at the core of what could be a grueling confirmation battle in the Senate. Barrett is Catholic, not an evangelical, but is a favorite of religious conservatives -- who form an important bloc in Trump’s re-election campaign.

Should Barrett, 48, get confirmed, it would mark a seismic shift in the high court, replacing the court’s staunchest liberal with a conservative.

Democrats, who have opposed Trump replacing Ginsburg in an election year, are likely to raise concerns about her religious views and to what extent they would influence her rulings. Those concerns emerged in Barrett's confirmation hearing for the 7th Circuit U.S. Court of Appeals in 2017. 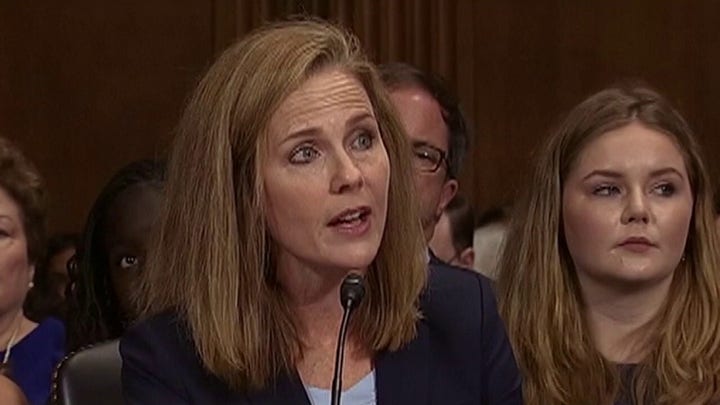 She told a 2006 Notre Dame law school graduating class, "Your legal career is but a means to an end, and ... that end is building the kingdom of God. ... If you can keep in mind that your fundamental purpose in life is not to be a lawyer, but to know, love and serve God, you truly will be a different kind of lawyer."

Barrett responded:  "If you're asking whether I take my Catholic faith seriously, I do, though I would stress that my personal church affiliation or my religious belief would not bear on the discharge of my duties as a judge.”