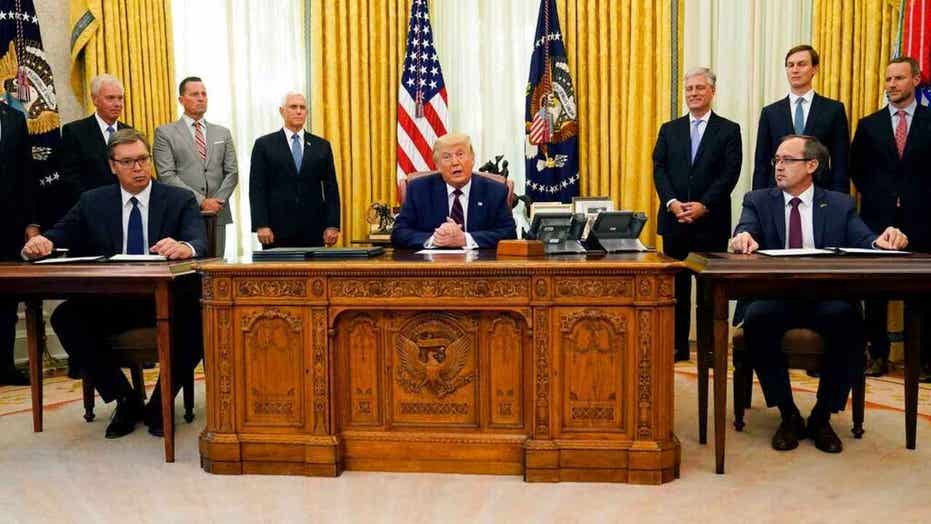 President Trump on Friday oversaw the signing of an agreement between Serbia and Kosovo that normalizes economic relations between the two countries — and also includes Kosovo recognizing Israel, and Serbia agreeing to move its embassy to Jerusalem.

The Belgrade-Pristina deal was signed by their two leaders –­ Serbian President Aleksandar Vucic and Kosovo's Prime Minister Avdullah Hoti –­ in front of Trump in the Oval Office, with Trump describing it as a "major breakthrough."

“Truly, it is historic,” Trump said. “I look forward to going to both countries in the not too distant future.”

The deal came just weeks after Trump announced an agreement had been reached between the United Arab Emirates and Israel on opening up relations between the two countries.

The U.S. moved its embassy in Israel from Tel Aviv to Jerusalem in 2018 after recognizing Jerusalem as its capital a year earlier, and has urged countries to do the same. Until now, Kosovo, a mainly Muslim country, had not recognized Israel.

Administration officials had met with the leaders on Thursday, urging them to put aside their political differences in favor of closer economic ties. Kosovo had declared independence from Serbia in 2008, nine years after NATO conducted an airstrike campaign against Serbia in a bid to end the persecution of ethnic Albanians in Kosovo.

While most Western nations have recognized Kosovo’s independence, Serbia, Russia and China have not — keeping tensions high in the Balkan region. National Security Adviser Robert O’Brien had said Thursday that the sides had made progress, and talks had continued Friday morning.

It marks another diplomatic victory for the Trump administration. The European Union had mediated talks for more than a decade.

Serbia's Vucic praised Trump's role in brokering the deal: "We haven’t resolved all our problems, but this is a huge step forward."

"This is a great moment for the region," Hoti said.

The White House summit originally had been scheduled for June, but was scrapped after an international court indicted Kosovo President Hashim Thaci, who was to lead the Kosovo delegation, on war-crimes charges.