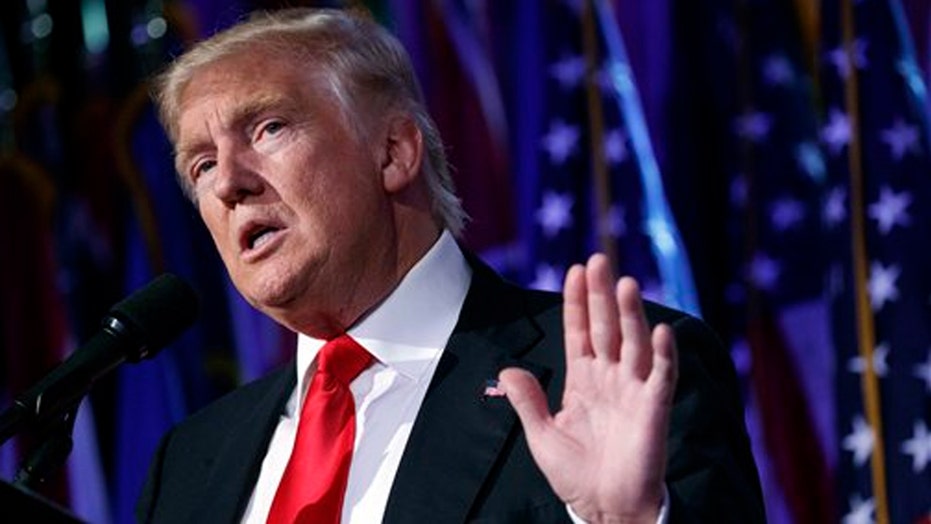 How will 5-year lobbying ban in Trump WH go over in DC?

A wave of Donald Trump “landing teams” will be storming the beaches of the federal government in the coming days and weeks in preparation for the transition, as the president-elect’s vetting of potential Cabinet picks moves into full swing.

The Republican president-elect was holding another packed day of meetings with potential prospects Thursday at New York City’s Trump Tower, the de facto center of the political universe in the wake of last week’s upset election.

While Trump prepares to announce his selections, the transition team is assembling what aides describe as “landing teams” that will visit and interact with federal agencies during the transition period.

The first “wave” will be assigned to national security matters, dealing with the departments of State, Justice and Defense and the National Security Council. This is expected to be followed by subsequent teams dealing with economic issues (covering the Treasury and other departments), domestic policy (covering Veterans Affairs, Health and Human Services and other agencies) and independent agencies.

TRUMP ON PAR WITH PAST PRESIDENTS IN CABINET PICK TIMELINE

Together, officials said Thursday, the teams will help facilitate the transition with the outgoing Obama administration and establish the new Trump administration.

“We feel way ahead of schedule and never in a rush to do the wrong thing,” Trump’s senior adviser Kellyanne Conway said.

As the “landing teams” make contact, Trump is meeting and vetting potential candidates for his inner circle at a steady clip.

Haley campaigned against Trump during the GOP primaries, even speaking out against him during her GOP response to State of the Union address nearly a year ago, referring to him indirectly as "the siren call of the angriest voices.” After Rubio dropped out, she supported Texas Sen. Ted Cruz. It remains unclear which post she may be considered for; one Trump source suggested it was unlikely Haley would be picked for secretary of state as has been reported elsewhere.

He was also set to meet with Japanese Prime Minister Shinzo Abe, one of a series of meetings or phone calls with foreign leaders – as the Trump team pushes back on earlier reports that some foreign leaders were having trouble getting in touch with him since the election.

While Trump was meeting with world leaders and administration prospects, transition chairman and Vice President-elect Mike Pence was in Washington Thursday for meetings with congressional leaders. He met first with House Republicans and Speaker Paul Ryan, to be followed by meetings with top Democrats.

In another transition development, Republican National Committee chief strategist Sean Spicer announced on a conference call Wednesday that Trump appointees will be asked to sign a form barring them from being registered lobbyists within five years of leaving the government. This would also include a lifetime ban on representing a foreign government.