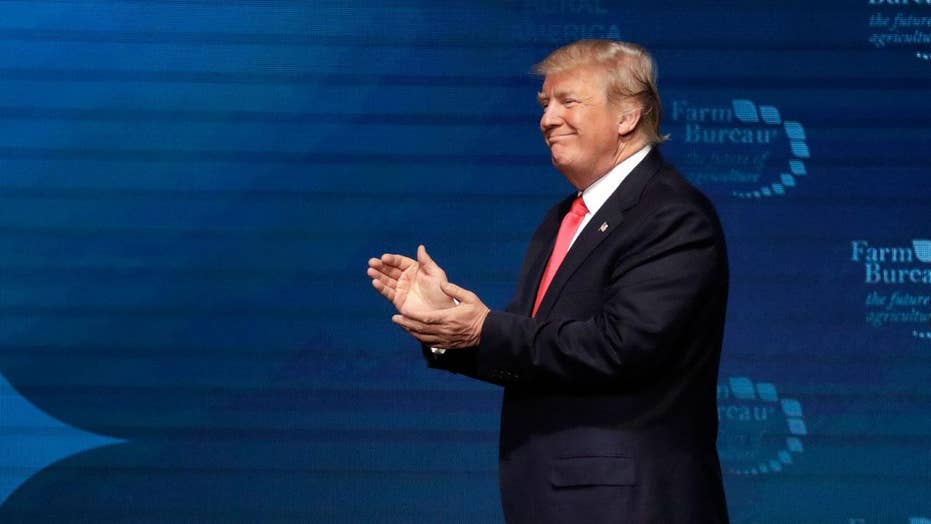 Tariffs on TPP partners would be surprising: Stefan Selig

Former Obama administration Under Secretary of Commerce for International Trade Stefan Selig explains why President Trump should reconsider having tossed aside the Trans-Pacific Partnership (TPP) deal.

President Trump is directing his top economic advisers to negotiate re-entering the Trans-Pacific Partnership, after pulling out of the trade agreement just one year ago.

During a meeting at the White House on Thursday, Trump told a group of Republican senators that he would assign National Economic Council Chairman Larry Kudlow and U.S. Trade Representative Robert Lighthizer to “get it done.”

"Last year, the President kept his promise to end the TPP deal negotiated by the Obama Administration because it was unfair to American workers and farmers. The President has consistently said he would be open to a substantially better deal, including in his speech in Davos earlier this year," White House Deputy Press Secretary Lindsay Walters said in a statement.

"To that end, he has asked Amb. Lighthizer and Director Kudlow to take another look at whether or not a better deal could be negotiated," Walters said.

Sen. Ben Sasse, R-Neb., who attended the meeting at the White House Thursday, told Fox News of the president's plan to move forward to weigh whether to re-join the TPP.

Sasse released a formal statement following the meeting with the president.

“The best thing the United States can do to push back against Chinese cheating now is to lead the other eleven Pacific nations that believe in free trade and the rule of law,” Sasse said in the statement. “It is good news that today, the President directed Larry Kudlow and Ambassador Lighthizer to negotiate U.S. entry into TPP.”

Trump’s announcement to re-visit TPP came during a meeting with Agriculture Secretary Sonny Perdue, Republican governors and Republican lawmakers to discuss issues impacting the agricultural community, including trade, according to Walters.

But just days after taking office, Trump signed an executive order withdrawing from the TPP, a 12-member free-trade agreement advocated by the Obama administration. The deal was aimed to strengthen economic ties between the U.S. and 11 other Pacific Rim nations, cut taxes, and foster trade to boost economic growth.

Trump, at the time, called the administration’s withdrawal from the TPP a “great thing for the American worker.”

Trump argued throughout the 2016 presidential campaign that TPP was harmful to the American workforce, robbing the manufacturing sector of jobs for Americans.

“The Trans-Pacific Partnership is another disaster, done and pushed by special interests who want to rape our country,” Trump said in June 2016.

But Sen. Pat Roberts, R-Kan., who attended the meeting, said Trump wants "to see if we couldn't take another look at TPP."

Roberts said  it would be "good news all throughout farm country."

Eleven other Pacific Rim countries signed a sweeping trade agreement last month that came together after the U.S. pulled out. The countries involved in the agreement are: Australia, Brunei, Canada, Chile, Japan, Malaysia, Mexico, New Zealand, Peru, Singapore, and Vietnam.

The move to consider reentry comes just one month after the president imposed tariffs on steel and aluminum imports to the U.S.

Sasse, who has been a critic of the tariffs, said Thursday that Trump “reaffirmed the idea that TPP would be easier for us to join now.”

Trump floated the idea to re-negotiate terms and reenter the TPP in January, noting that he would consider signing back on if he could make a “substantially better deal.”

"As I have said, the United States is prepared to negotiate mutually beneficial, bilateral trade agreements with all countries. This will include the countries in TPP, which are very important," Trump said at the World Economic Forum in Davos, Switzerland in January. "We would consider negotiating with the rest, either individually, or perhaps as a group, if it is in the interests of all."

Fox News' Jennifer Bowman and Barnini Chakraborty and The Associated Press contributed to this report.