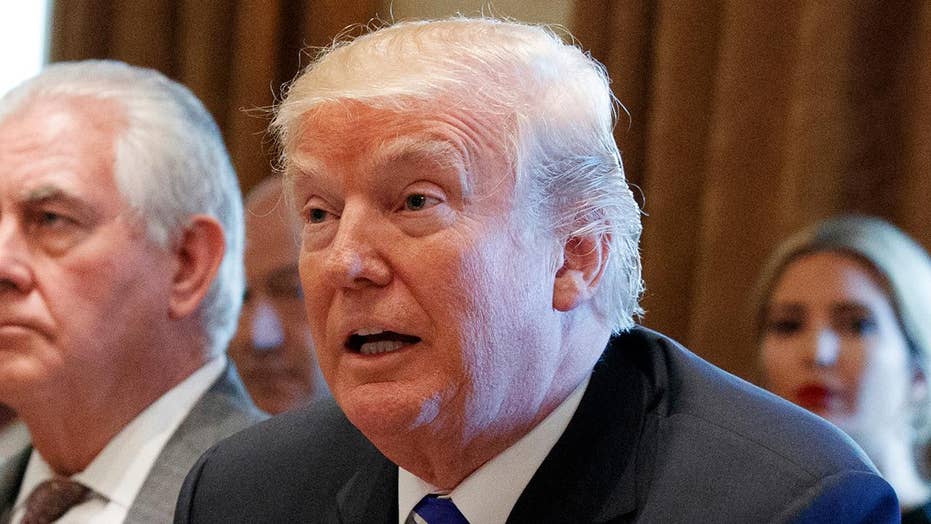 President Trump announced Monday that the United States is designating North Korea as a state sponsor of terrorism, something he said “should have happened a long time ago.”

Trump announced the designation in a Cabinet meeting at the White House, clearing the way for more sanctions on the “murderous” rogue regime, just days after returning from his historic 13-day trip to Asia.

With the president’s directive, North Korea will return to the State Department’s list of designated state sponsors of terrorism for the first time since its removal by the Bush administration in 2008. North Korea will be among Iran, Sudan and Syria.

Trump also cited the death of American college student Otto Warmbier, who was imprisoned in North Korea and died days after being returned to the U.S. in a coma.

OTTO WARMBIER DEAD ; FORMER US PRISONER OF NORTH KOREA WAS 22

Trump added that the designation supports a “maximum-pressure campaign” on the “murderous regime.”

Trump explained that sanctions would be imposed over a two-week period and would constitute the “highest level of sanctions” on North Korea.

Secretary of State Rex Tillerson floated the idea of re-designating North Korea to the list in April.

But the “symbolic” designation of North Korea as a state sponsor of terrorism, as Tillerson described it, does not mean the Trump administration is abandoning the push for peaceful negotiations.

“We still hope for diplomacy,” Tillerson said. “This is all part of continuing to turn this pressure up and we’ve continued to turn the pressure up on North Korea by getting other countries to join and take actions on their own.”

“It is very symbolic on the one hand—it points out again what a rogue regime this is, and how brutal of a regime it is and how little they care about the value of human life,” Tillerson said. “That makes a strong statement. Practical effects may be limited, but hopefully we’re closing off a few loopholes with this.”

According to the State Department, once designated, a country or nation state faces sanctions resulting in restrictions on U.S. foreign assistance; a ban on defense exports and sales; certain controls over exports of dual use items; and miscellaneous financial and other restrictions.