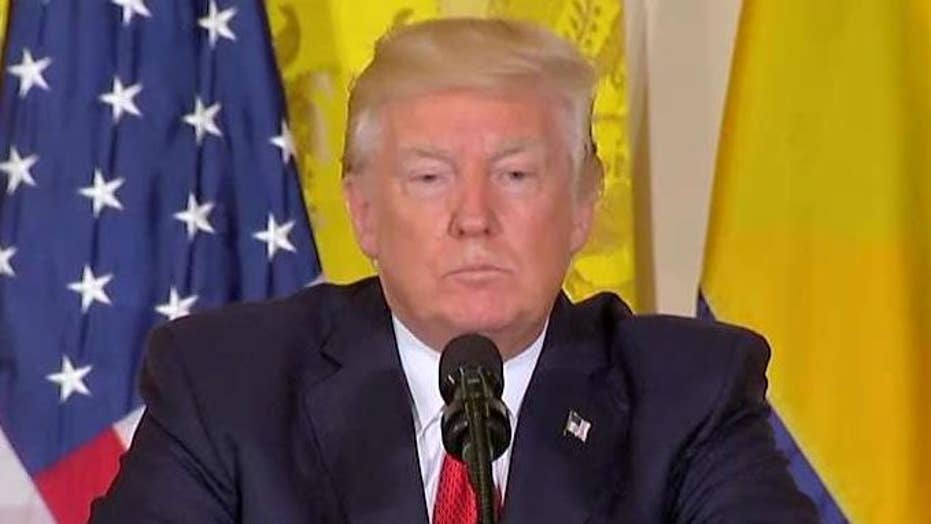 Trump: I did not ask Comey to shut down Flynn probe

President Trump on Thursday strongly denied any collusion between his 2016 campaign and Russia, and rejected allegations that he pressured then-FBI Director James Comey to drop a related investigation into former national security adviser Michael Flynn – saying “the entire thing has been a witch hunt.”

“There was no collusion between, certainly, myself and my campaign – but I can only speak for myself – and the Russians – zero,” he said, adding that questions surrounding his campaign were divisive and pulled focus from other problems facing the nation.

“I think we have a very divided country because of that and many other things,” he said.

But Trump, speaking in the East Room of the White House during a joint press conference alongside the visiting Colombian president, said while he respected the move by Deputy Attorney General Rod Rosenstein to appoint a special counsel in the Russia probe, “the entire thing has been a witch hunt.”

He also denied he urged Comey to drop the Flynn investigation, telling reporters, “No, no. Next question.”

The allegation was made by Comey himself in a memo he wrote after a meeting in February. The memo emerged in press accounts this week after being revealed by Comey associates, in the wake of Trump’s decision to fire Comey last week.

The denials amount to Trump’s most extensive, public response yet to the wave of negative reports aimed at the White House and members of the Trump administration.

Trump on Thursday also defended his Comey decision and took aim at the former bureau boss’ credibility and popularity.

He added, “When I made that decision, I actually thought that it would be a bipartisan decision because you look at all of the people on the Democratic side, not only the Republican side, that were saying such terrible things about Director Comey.”

The president dismissed suggestions of criminal charges and impeachment talk.

“I think it’s totally ridiculous,” he said. “Everybody thinks so.”

Trump spoke alongside Colombian President Juan Santos – though the progress made during a work session at the White House between representatives of the two countries took a back seat to the wave of political controversies blanketing the Trump administration.

Still, both leaders were able to get in a few words about the bi-national cooperation to eliminate “drug trafficking networks, illicit financing, coca cultivation and cocaine production, of which there is far too much.”

Trump said his administration was committed to cutting the flow of drugs into the United States.