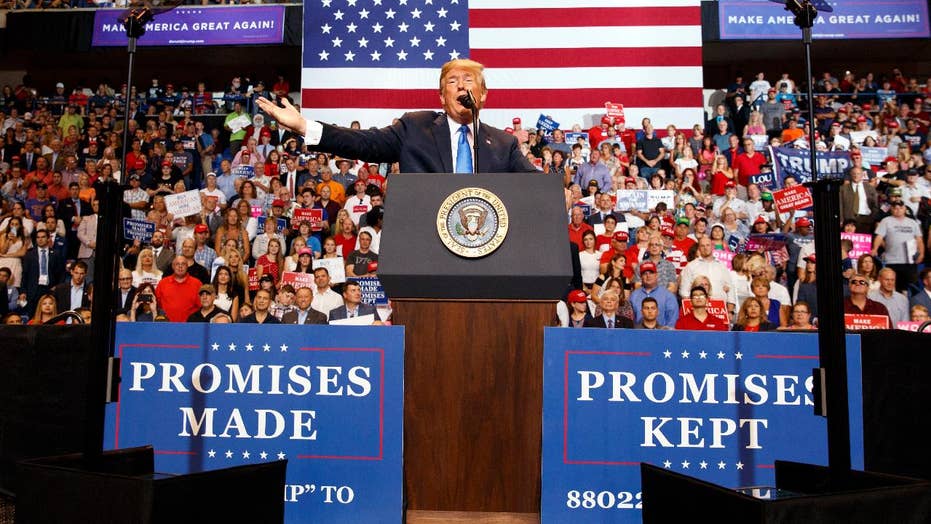 President Trump says the United States will be taking some 'very tough actions' against MS-13 while speaking at Pennsylvania rally.

President Trump unspooled a wide-ranging defense of his foreign policy -- including recent meetings with the leaders of Russia and North Korea -- during a rally to boost support for U.S. Rep. Lou Barletta's Senate campaign.

In front of a full arena in Wilkes-Barre on Thursday, Trump mocked Barletta's Democratic opponent -- two-term incumbent Bob Casey -- as "so overrated."

"He will do whatever [Chuck] Schumer, [Nancy] Pelosi, and the new star of the Democrat Party tells him to do," said the president, who added Rep. Maxine Waters, D-Calif., to that roster as the so-called "new star" and "new leader" of the Democratic party.

Barletta, a fervent Trump supporter who shares his hard-line views on immigration, then took the stage and rattled off a laundry list of Trump's accomplishments.

However, Barletta faces an uphill climb to defeat the Democrat, as two polls taken after his GOP primary victory show Casey with a double-digit lead.

Later on, Trump referred to Casey as "Sleeping Bob" and attacked his views on immigration, particularly his support of chain migration.

"By the way, if you ask him why, he can't [answer]," Trump said as an aside. "He wants it because Schumer said to have it."

The president also rehashed his recent summits with Russian President Vladimir Putin and North Korean dictator Kim Jong Un. Appearing to be stung by criticism of both meetings, Trump claimed that his critics wanted him to attack Putin at the summit in Helsinki over Russia's interference in the 2016 election.

"They wanted me to walk up and go like this," Trump said before briefly walking away from his lectern and shadowboxing an imaginary Putin. "They wanted me to go up and have a boxing match. Whatever happened to diplomacy?"

"And let me tell you, if I did go up and start screaming, they would have said, 'He was terrible! He was so rude! It was horrible! His performance was horrible!'" Trump went on.

On North Korea, Trump claimed that he "got along great with Chairman Kim. I got along great. That's a good thing, not a bad thing, by the way." He also cited the return of American detainees and the lack of recent missile tests as signs of progress.

The president also continued to air his grievances against the media, at one point calling them "the fake, fake disgusting news."

Trump, the first Republican presidential candidate to win Pennsylvania since George H.W. Bush in 1988, began his speech with a lengthy reminiscence about his 2016 victory. At one point, he lamented the media's supposed slowness in calling the state for him on election night.

"You people didn't get the privilege of taking us over the top," the president said before promising, "next time, next time."

Turning briefly to the 2020 election, Trump also speculated about whether he wanted Massachusetts Sen. Elizabeth Warren, whom he decried as "Pocahontas," or Vermont Sen. Bernie Sanders, whom he flatly deemed "crazy," as his opponent.

Trump has accelerated his campaign schedule in recent weeks to help Republicans he favors both in primaries and November's midterms. On Tuesday, he headlined a Florida rally to support U.S. Rep. Ron DeSantis in his campaign for governor and has sought to boost outgoing Gov. Rick Scott in what is expected to be a close Senate race against incumbent Bill Nelson.

On Saturday, Trump will travel to Ohio to hold a rally for State Sen. Troy Balderson, who is running for Congress in a special election to be held next week.