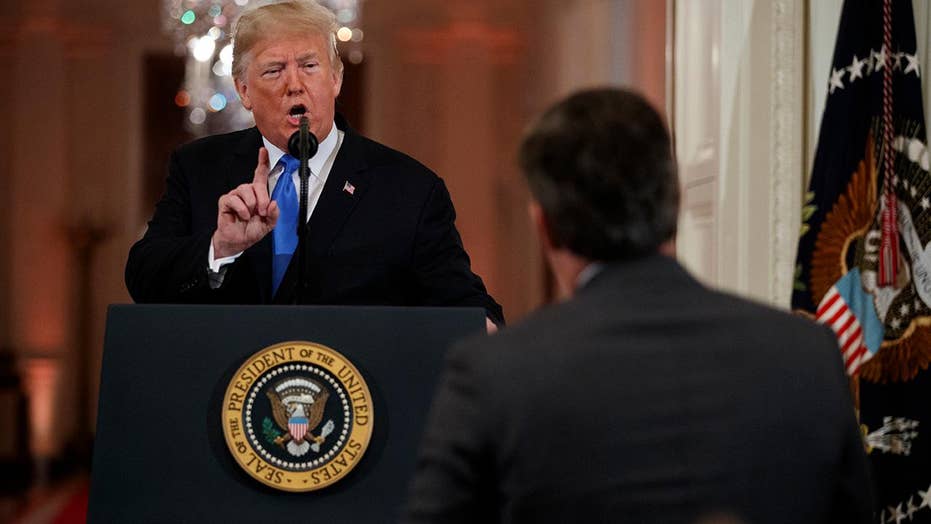 There was no talk of a thumpin’ or a shellacking, as when George W. Bush or Barack Obama lost Congress.

No, Donald Trump says an election in which his party lost the House was actually a good night.

It was “such a very Big Win,” he tweeted, “and all under the pressure of a Nasty and Hostile Media!”

And: “To any of the pundits or talking heads that do not give us proper credit for this great Midterm Election, just remember two words - FAKE NEWS!”

It’s not fake when news organizations offer a different election analysis. But the press corps didn’t help itself Wednesday with behavior that sometimes bordered on obnoxious.

There are a number of things that the president can say about the midterms. He helped the Republicans increase their margin in the Senate, and undoubtedly helped individual Senate and gubernatorial candidates. By nationalizing the election, he might have blunted what could have been a Democratic wave — say, winning 40-plus seats instead of at least 27 — in the House.

At a combative news conference Wednesday, Trump said that what happened at the polls Tuesday was “very close to a complete victory” — despite counter-campaigning by Barack Obama and Oprah Winfrey.

By ending one-party government in Washington, I think it’s fair to say that voters wanted to put a check and balance on the Trump presidency, but not deliver a repudiation. At the same time, the outcome might have been different were the Republicans not blessed with such a favorable Senate map.

There was some obvious partisanship in the media coverage. The lead story in National Review was “Republicans Hold the Senate,” though that rather predictable outcome is less important than Dems flipping the House. (A later update made the site’s lead “Split Decision.”)

It seems that “the disproportionate representation of small states is part of the body’s original design. But that advantage, which benefits white voters, has become more lopsided than the framers of the Constitution likely ever imagined.” So they’re back to saying states like North Dakota and Montana shouldn’t have two senators.

I’ll leave it to readers to decide whether the New York Times' lead news story was tilted in a certain direction:

The outcome was a “forceful rebuke” of Trump, and voters in urban and suburban districts “have recoiled from the president’s demagoguery on race. ...

“What was effectively a referendum on Mr. Trump’s incendiary conduct and hard-right nationalism may make some of the party’s lawmakers uneasy about linking themselves to a president who ended the campaign showering audiences with a blizzard of mistruths, conspiracy theories and invective about immigrants.”

By contrast, Dan Balz, the Washington Post’s dean of political reporters, found there was a red wall:

“All year long, Democrats talked optimistically about a blue wave that they believed was building around the country, one powerful enough to flip control of the House and even, against the odds, put the Senate in play as well. But a somewhat different reality began to set in early in the evening as the familiar contours of red and blue America powerfully reasserted themselves.”

Those who say nothing really changes now for the president are just engaging in spin. But what happens next is a more complicated question than it might seem.

Trump, a former Democrat, could of course choose to find some common ground with Nancy Pelosi, who may want to demonstrate that her party can help govern rather than just attack the president.

In fact, he gave the once-and-future-speaker a shout-out: “I give her a great deal of credit for what she’s done and what she’s accomplished.”

Trump said he’ll now have “a much easier path” than if the GOP had held the House by a couple of seats, because Democrats will come to him with plans “and we’ll negotiate it. ... It really could be a beautiful, bipartisan type of situation,” and “much less gridlock.”

Perhaps. We’ll have to see what happens, as POTUS likes to say. And if there’s a total impasse, Trump said, “government comes to a halt and I would blame them.”

Nor was it a good sign when Trump tweeted that if the Democrats “think they are going to waste Taxpayer Money investigate us,” then “we will likewise be forced to consider investigating them for all of the leaks of Classified Information, and much else, at the Senate level. Two can play that game!”

Finally, Trump’s complaints about the media came into sharp relief when he called on his nemesis, Jim Acosta. CNN’s White House correspondent debated the president about the caravan — “It was not an invasion” — and questioned whether Trump was demonizing immigrants.

After a couple of exchanges, Acosta tried to ask another question. Trump said he was moving on, and the reporter actually refused to give up the microphone when an aide tried to take it.

“That’s enough, put down the mic,” Trump said. “I tell you what, CNN should be ashamed of itself having you working for them. You are a rude, terrible person, you shouldn’t be working for CNN. You’re a very rude person, the way you treat Sarah Huckabee is horrible.”

When Trump called on NBC’s Peter Alexander, who defended Acosta -- “I’m not a big fan of yours, either,” the president said — Acosta yelled a question about pipe bombs.

“When you report fake news,” Trump said, “you are the enemy of the people.”

Acosta seems to resort to grandstanding and interruption in most of his interactions with Trump. And the White House late yesterday temporarily suspended his credentials, claiming he had been "placing his hands on a young woman just trying to do her job as a White House intern."

This was the aide asked to take his mike, and there was only incidental physical contact. The administration would have had a stronger case saying Acosta wasn't following the rules. By yanking his hard pass, the Trump team shifted the spotlight back to its treatment of the press and turned Acosta into a journalistic martyr.