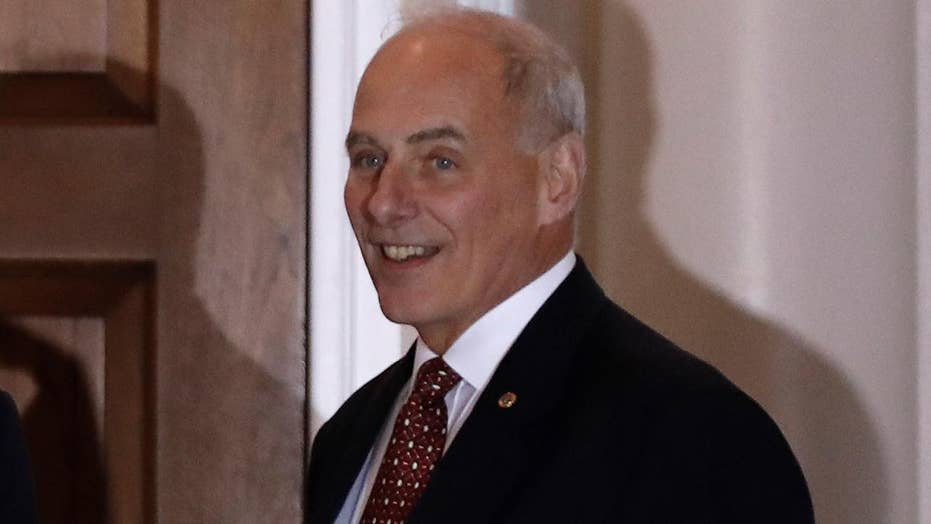 By choosing retired Marine General John Kelly to serve as Homeland Security Secretary, President-elect Donald Trump appears to be assembling a 'Band of Brothers' rather than a 'Team of Rivals,' the model used by President Obama to form his first cabinet.

Reached by phone in Canberra, Australia, Kelly told Fox News, "I have been asked and would consider it an honor."

In addition to three-star General Michael Flynn, the former head of the Defense Intelligence Agency, Trump has now chosen two Marines - both close friends - to lead the Pentagon and Department of Homeland Security. A third Marine, General Joe Dunford, is Chairman of the Joint Chiefs.

Trump tapped Gen James Mattis to be Defense Secretary pending Senate confirmation and Thursday crossed a hurdle in Congress with the House passing language as part of a budget bill that would allow for a one-time exception to the law that states that a person needs to be off active duty for seven years before serving as Defense Secretary, a role typically reserved for civilians.

Dunford, now the chairman of the joint chiefs, is a longtime friend of Kelly's. In fact, Dunford delivered the news that Kelly's son, then 2nd Lieutenant Robert. M. Kelly, also a Marine, had been killed in Afghanistan six years ago. He appeared at Kelly's front door wearing his full dress uniform.

Dunford was assistant Commandant of the Marine Corps at the time.

Kelly said when he saw his old friend at the door, he knew immediately his son was dead. Kelly is the highest ranking military officer to have a child killed in combat.

Four days after his son was killed, he delivered an emotional speech in St. Louis to the Semper Fi Society, a speech that has become iconic within the military and among military families. He called out the fact that so few families serve and so few are protecting so many.

"We are in a life-and-death struggle, but not our whole country," Kelly said in the November 2010 speech. "One percent of Americans are touched by this war. Then there is a much smaller club of families who have given all."

Dunford and his wife Ellyn attended a gala dinner that Veterans' Day. Earlier in the day, they accompanied Kelly and his wife to Dover to retrieve their son's remains.

There is no underestimating the bond that these two Marines feel for each other. They will now be in a very senior advisory role to President-elect Trump.

When asked about losing his son at his final Pentagon press conference, Kelly spoke for all Goldstar families: "I think the one thing they would ask is that the cause for which their son or daughter fell be -- be carried through to -- to a successful end, whatever that means, as opposed to 'this is getting too costly,' or 'too much of a pain in the ass,' and 'let's just walk away from it.' Because that's when they start thinking it might have been not worth it."

He served as the commander of the U.S. Southern Command from 2012 to 2016, when he oversaw the detention facility at Guantanamo Bay, the U.S. southern border and worked with the DEA on drug interdictions.

At his final press conference in the Pentagon, Kelly told reporters that one of his frustrations was having the military's hands tied in some ways when it came to interdicting drugs, including not enough helicopters and surveillance.

"I don't need an awful lot," Kelly told reporters at the Jan. 8 press conference. "But drones would be nice, because they can stay up forever and they don't get tired, and they're less expensive to operate. But no, we have not seen anything, any increases -- certainly no drones."

He expressed concerns at the time that the U.S. had rushed to release certain prisoners who might return to the battlefield.

"Well, I mean, they're all bad boys. We have dossiers on all of them. Some of them were more effective in being bad boys than others. You know, you -- we can -- I think we can all quibble on whether 13 or 12 or 8 years in -- in detention is enough to have them -- having paid for whatever they did, but they're -- they're bad guys," Kelly said.

He is not afraid to speak his mind. Here's what Kelly said when asked about the military being told to open all combat positions to women last year:

"It will be the pressure for not probably the generals that are here now, but for the generals to come, and admirals, to lower standards because that's the only way it'll work in the way that I hear some people, particularly, the agenda-driven people here in Washington -- or in the land, the way they want it to work," Kelly told reporters Jan. 8 at the Pentagon.