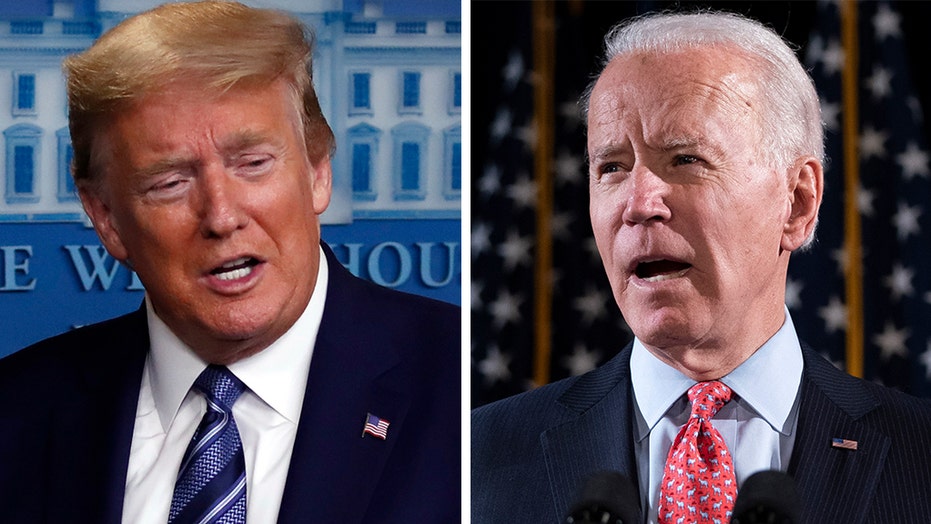 The Trump campaign on Tuesday asked Twitter to label a video posted by Joe Biden's campaign as manipulated media over a clip that they say takes President Trump's words out of context and has been repeatedly fact-checked as incorrect manipulation, but the company declined to do so, according to emails obtained by Fox News.

The video purports to contrast what Trump says in public versus in private on the coronavirus, accusing him of lying to the public. One of the examples of Trump's public comments in the video is from a Feb. 28 campaign rally at which Trump appears to be calling the coronavirus a hoax.

"The coronavirus, and this is their new hoax," Trump is heard saying in the Biden video.

BIDEN HITS BACK AT TRUMP'S CALL FOR PRE-DEBATE DRUG TESTS: 'THE COMMENTS ARE JUST FOOLISH'

The splicing is identical to how the Biden campaign cut a video of the Feb. 28 address in a March video that got four Pinnochios from the Washington Post, and was panned by several other fact-checkers.

The president did not say "this is their new hoax" immediately after he said "coronavirus" in his original comments, as the ad makes it appear. He made the hoax comment several sentences later. Trump was still talking about the coronavirus when he said the "hoax" part of the comment, but it was in reference to the media and how it covered his impeachment trial.

The Post took issue with the edit, saying that it was misleading. Trump has misled about his administration's response to the coronavirus, the Post claimed, "But that does not excuse this kind of video manipulation. This is a clear example of deceptive editing, specifically what we label 'omission.'"

"Joe Biden relies on lies and fabrications and doctored videos to attack President Trump’s phenomenal handling of the deadly virus unleashed by China," Trump campaign spokesman Matt Wolking said in a statement. "Slow Joe can’t name a single thing he would have done differently if he had been president, other than refusing to restrict travel from China, which would have resulted in more dead Americans."

Twitter's refusal to label the Biden clip manipulated media comes as it has labeled several videos shared by Trump manipulated media in the past, even when they are obviously parodies. Twitter, for example, labeled a parody video Trump shared of Biden apparently dancing to "F--- Tha Police" by N.W.A. as manipulated media on Wednesday.

Trump, of course, has played down the coronavirus in some instances, as recently as Tuesday night claiming that it will disappear even if the United States does not develop a vaccine.

"Donald Trump is the most dishonest president in American history and one of the least credible human beings in the world," Biden campaign spokesman Andrew Bates said to The Post in March in response to its fact check of the Biden ad at the time. The Biden campaign did not immediately return a request for comment from Fox News on Wednesday.

Bates continued in March: "We don’t trust his next-day cleanup attempt, and he has made many comments in that same vein."

The Biden ad tweeted Tuesday goes on to purportedly characterize what Trump says "in private" about the coronavirus. It quotes phone calls of Trump speaking on the record to journalist Bob Woodward for his book on Trump's presidency in which Trump called the virus a "killer" and "the plague."

Trump, of course, was not speaking in private at that moment. It was an on-the-record conversation with a journalist. Further, Trump has used the terms "plague" and "killer" to refer to the coronavirus repeatedly in public, including before his April interview with Woodward. He called the virus a "tough killer" on March 21. He called it a "plague" in a White House press briefing April 1. These were not the only times that Trump called the coronavirus a plague or a killer.