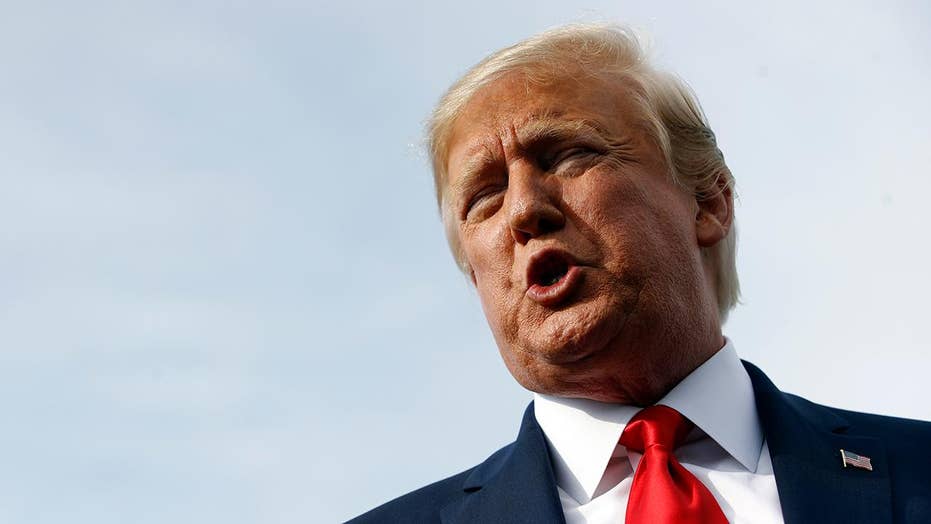 President Trump called Democratic Reps. Rashida Tlaib and Ilhan Omar "very anti-Jewish and anti-Israel" and defended his statements urging Israel to block them from entering the country, amid a massive outcry from Democrats.

Speaking to reporters after deplaning Air Force One at Morristown Municipal Airport in New Jersey, Trump said recent comments by the two freshmen Democratic lawmakers about Israel were "disgraceful," arguing they have become the "face of the Democrat Party."

The president added: "This isn't a one-line mistake. what they have said about Israel and Jewish people is a horrible thing and they've become the face of the Democrat Party."

Trump's comments came hours after the government of Israeli Prime Minister Benjamin Netanyahu barred Tlaib and Omar from entering the country ahead of a planned visit.

The unprecedented move to bar Tlaib, D-Mich., and Omar, D-Minn., from visiting marks a deep foray by Israel into America's bitterly polarized politics. Israel's move came shortly after Trump tweeted that the Israeli government would "show great weakness" if it allowed the lawmakers in.

It is also a sharp escalation of Israel's campaign against the international boycott movement.

"They hate Israel & all Jewish people, & there is nothing that can be said or done to change their minds," Trump tweeted before calling the two congresswomen "a disgrace."

He added that their itinerary "revealed that they planned a visit whose sole objective is to strengthen the boycott against us and deny Israel's legitimacy."

The two newly elected Muslim members of Congress are outspoken critics of Israel's treatment of the Palestinians. Tlaib's family came to the United States from the West Bank.

Israel said it would consider any request from Tlaib to visit relatives on humanitarian grounds.

Tlaib and Omar have also been the target of repeated attacks by Trump in recent months, including a series of controversial tweets on July 14 in which he said they should "go back" to the "broken" countries they came from. Both are U.S. citizens, and Tlaib was born in the United States. The two are members of the so-called "Squad" of new, left-wing Democrats, along with Reps. Ayanna Pressley of Massachusetts and Alexandria Ocasio-Cortez of New York.

The decision to ban the congresswomen could further sharpen divisions among Democrats over the issue of Israel ahead of the 2020 elections. Republicans have amplified the views of left-wing Democrats like Tlaib and Omar to present the party as deeply divided and at odds with Israel. Democratic leaders have pushed back, reiterating the party's strong support for Israel, in part to protect representatives from more conservative districts.