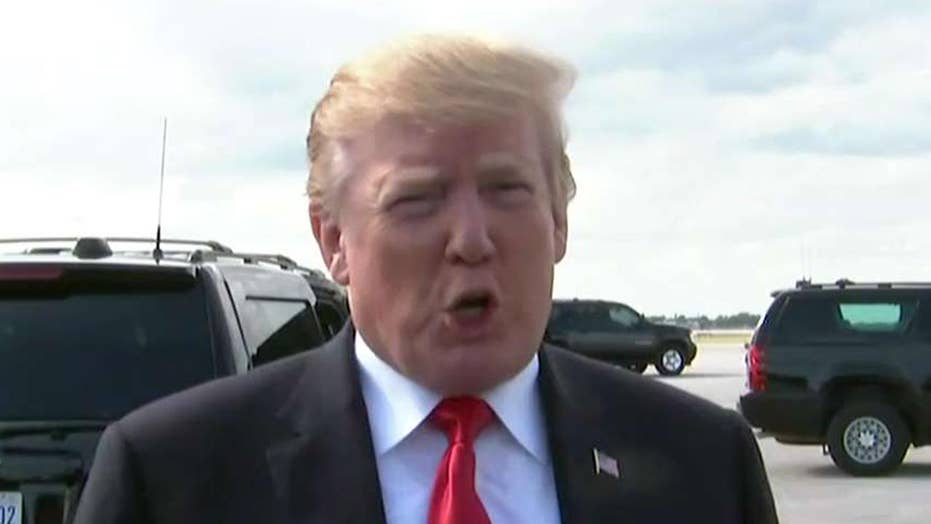 President Trump: The Mueller report is a complete and total exoneration

Trump says accusations of collusion and obstruction were 'an illegal takedown that failed.'

President Trump told reporters Sunday that the release of a summary of Special Counsel Robert Mueller's Russia probe findings represented a "complete and total exoneration," calling it "an illegal takedown that failed."

"So after a long look, after a long investigation, after so many people have been so badly hurt, after not looking at the other side, where a lot of bad things happened, a lot of horrible things happened, lot of very bad things happened for our country, it was just announced there was no collusion with Russia, the most ridiculous thing I've ever heard," Trump said as he prepared to board Air Force One to return to Washington from his Mar-A-Lago estate in Florida.

"There was no collusion with Russia," Trump went on. "There was no obstruction, none whatsoever. It was a complete and total exoneration. It’s a shame that our country had to go through this. To be honest, it’s a shame that your president has had to go through this. Before I even got elected, it began. And it began illegally. And hopefully, somebody’s gonna look at the other side. This was an illegal takedown that failed. And hopefully, somebody’s going to be looking at the other side. So, it’s complete exoneration. No collusion, no obstruction."

The president who repeatedly decried the Mueller probe as a "witch hunt," also tweeted: "No Collusion, No Obstruction, Complete and Total EXONERATION. KEEP AMERICA GREAT!"

In a four-page letter to the leaders of the House and Senate Judiciary committees, Attorney General William Barr wrote that Mueller, a former FBI director, "did not find that the Trump campaign, or anyone associated with it, conspired or coordinated with the Russian government" or Russia-linked organizations in either "disinformation and social media operations" or "computer hacking operations designed to gather and disseminate information to influence the [2016] election."

Barr also wrote that he and Deputy Attorney General Rod Rosenstein had concluded that evidence collected by Mueller's investigators "is not sufficient to establish that the President committed an obstruction-of-justice offense." The attorney general added that Mueller had written: "while this report does not conclude that the President committed a crime, it also does not exonerate him."

The president's eldest son, Donald Trump Jr., who had been at the center of collusion speculation due to his role in arranging a June 2016 meeting at Trump Tower between top campaign officials -- including senior adviser Jared Kushner and then-campaign chairman Paul Manafort -- and Russian lawyer Natalia Veselnitskaya, attacked the mainstream media in a statement of his own.

"After more than 2 years of non-stop conspiracy theories from CNN, MSNBC, Buzzfeed and the rest of the mainstream media, as well as daily lies and smears coming from Democrats in Washington, the Mueller Report proves what those of us with sane minds have known all along, there was ZERO collusion with Russia," said the president's son.

"Sadly, instead of apologizing for needlessly destabilizing the country in a transparent attempt to delegitimize the 2016 election, it's clear that the Collusion Truthers in the medi and the Democrat Party are only going to double down on their sick and twisted conspiracy theories moving forward," Trump Jr. went on. "It's my hope that honest journalists within the media have the courage to hold these now fully debunked truthers accountable and treat them with the scorn and ridicule that they so deserve."

Attorney General William Barr says special counsel Robert Mueller did not find that the Trump campaign or its associates 'conspired or coordinated' with Russia in its efforts to influence the 2016 election; reaction from President Trump's attorney Rudy Giuliani.

Rob Goldstone, an entertainment publicist who helped broker the Trump Tower meeting, told Fox News: "After 2 years, Robert Mueller has delivered his report, stating there was no collusion in the 2016 Presidential election. That includes my email to [Trump Jr.] and the subsequent Trump Tower meeting ... which as I have stated from the beginning, had nothing to do with collusion."

Trump's legal team, led by former New York City Mayor Rudy Giuliani and Jay Sekulow said in a statement that the report's findings were "a complete and total vindication of the President."

"As we have stated from the very beginning, there was no collusion and no obstruction," said the statement from Guliani, Sekulow, Jane Raskin and Martin Raskin. "The Special Counsel’s investigation 'did not find that the Trump campaign or anyone associated with it conspired or coordinated with Russia in its efforts to influence the 2016 U.S. presidential election.'

"Further, Attorney General Barr and Deputy Attorney General Rod Rosenstein concluded that there was no obstruction of justice: 'In cataloguing the President’s actions, many of which took place in public view, the report identified no actions that, in our judgment, constitute obstructive conduct, had a nexus to a pending or contemplated proceeding, and were done with corrupt intent.'"

Shortly after the president spoke, his re-election campaign manager Brad Parscale said in a statement that Trump had been "completely and fully vindicated" by Mueller and that what he called "the Russia collusion conspiracy theory" had been exposed as "the sham that it always was and catching Democrats in an elaborate web of lies and deceit."

"After issuing 2,800 subpoenas and 500 search warrants, interviewing 500 witnesses, employing 40 FBI agents and 19 lawyers, and spending tens of millions of taxpayer dollars, Robert Mueller concluded unequivocally, '[T]he investigation did not establish that members of the Trump Campaign conspired or coordinated with the Russian government in its election interference activities,'" Parscale said. "Moreover, the Attorney General and Deputy Attorney General determined that there was no evidence of obstruction of justice.

"Nevertheless, Democrats took us on a frantic, chaotic, conspiracy-laden roller coaster for two years, alleging wrongdoing where there was none," Parscale added. "So distraught and blindsided by the results of the 2016 elections, Democrats lied to the American people continually, hoping to undo the legitimate election of President Trump."

Republican National Committee Chairman Ronna McDaniel said in a statement that the release of the report's summary was "a great day for all Americans."

"As we have said all along, there was no collusion and no obstruction," McDaniel said. "Now that this investigation is over, Democrats need to finally end their baseless investigations and political crusade against President Trump for the good of the country."