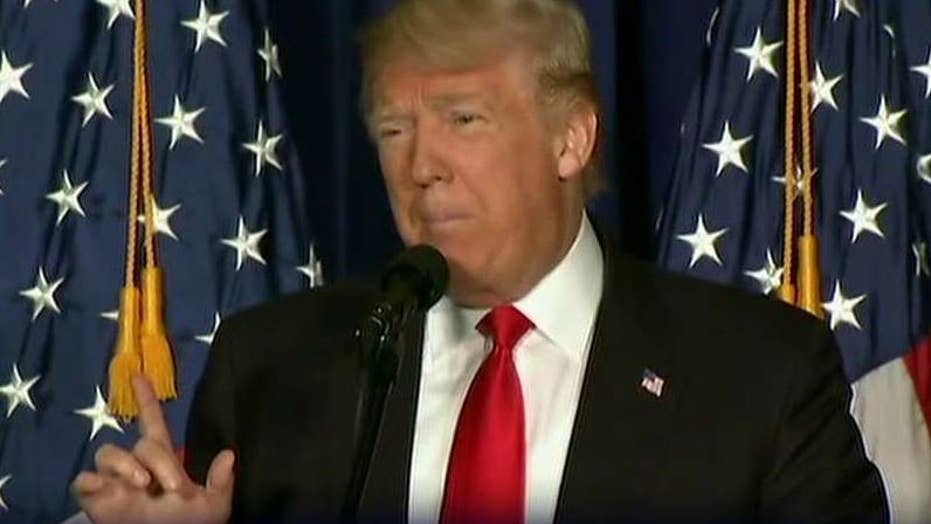 Donald Trump, in a highly anticipated speech on the heels of his primary-contest sweep across the Northeast, called Wednesday for a drastic shake-up in America’s foreign policy – including “getting out of the nation-building business” and demanding NATO allies pay their “fair share” or be left to “defend themselves.”

In what was billed as a major policy speech, Trump called for an “America first” approach. To that theme, Trump voiced skepticism toward international deals like NAFTA and said a Trump administration would not allow the U.S. to enter agreements that reduce America’s ability to control its own affairs. He panned what he described as the “false song of globalism.”

The speech, read from a teleprompter and focused on policy, was also heavy on campaign-season slams against President Obama and Hillary Clinton’s tenure as secretary of state. He called their policies “aimless” and destructive, and criticized them for not using the term “radical Islam.”

“We went from mistakes in Iraq to Egypt to Libya to President Obama’s line in the sand in Syria,” Trump said. He said this has allowed the Islamic State to thrive -- but said, going forward, the U.S. is out of “nation-building.”

Rather, he said the focus will be on restoring stability, and containing the spread of radical Islam. “ISIS will be gone if I’m elected president,” he claimed.

Meanwhile, he stood by his controversial stance on NATO allies, complaining only four other member countries besides the U.S. spend the minimum 2 percent of GDP on defense.

“The countries we are defending must pay for the cost of this defense … and if not, the U.S. must be prepared to let these countries defend themselves. We have no choice.”

Trump said, if elected president, he would call for a summit with NATO allies and a separate summit with Asian allies to discuss common challenges – including tackling migration and Islamic terrorism. He broadly called for the U.S. to project strength – and better understand who its friends and enemies are. Regarding Russia and China, he said “we are not bound to be adversaries.”

Rival Ted Cruz afterward panned the speech and questioned whether “others in the Washington Cartel’s industry of foreign policy for personal gain were involved in the drafting of this address.”

“He is never going to fight the system, he is the system,” Cruz said in a statement. “He and Hillary Clinton are two sides of the same coin. She has made her millions from inside and Donald Trump has made his billions buying people like Hillary Clinton. Both are part of the culture of foreign policy for personal gain."

Trump sought to demonstrate his foreign policy chops as he tries to present a more presidential image – while increasingly turning his attention on the campaign trail to a general election battle he presumes will involve him and Clinton.

The billionaire businessman declared himself the “presumptive nominee” Tuesday night, after winning primaries in Connecticut, Delaware, Rhode Island, Pennsylvania and Maryland. He hasn’t shelved the trash talk and provocative language on the campaign, not yet anyway – repeatedly accusing Clinton of playing the “woman card” and mocking remaining GOP rivals Ted Cruz and John Kasich.

But he also has a lot to prove when it comes to calming foreign leaders and policy professionals. They've been stunned by his often brash policy proclamations, like his vow to temporarily bar foreign Muslims from entering the country, and an apparent disregard for some long-standing alliances.

Trump delivered the speech at Washington's stately Mayflower Hotel, even employing the rare use of a teleprompter.

The speech comes as Trump has been working to professionalize his campaign with the addition of several new and experienced aides who have stressed a need to expand his policy shop and offer more specifics on his plans. Senior aide Paul Manafort said last week that he'd met people at a number of think tanks and members of Congress to talk about bulking up the team's policy component, which is smaller than that of leading campaigns in the past.

While Trump's speech marks a departure from his usual rally routine of speaking off the cuff, consulting only hand-scrawled notes, his remarks in front of the American Israel Public Affairs Committee last month provided a test run of sorts, with Trump speaking from a prepared speech using a teleprompter.